The body of French tourist Violet Gigano, who had been missing for six days, was found  near Elafonissi in the region of Chania, Crete.

According to reports, her body was discovered by Greek search and rescue teams on a trail leading to the famous beach of Elafonissi, in the southwest of the island.

Police say that Gigano was on her way back to her car after visiting Elafonissi on foot, a distance of about 10 km (6 miles). Her body was discovered in a ravine.

Earlier, an alert had been issued for Gigano, whose last communication with her family back in France was June 24. She was supposed to fly back home on Tuesday, but she never did so. Her family then alerted the French authorities, who in turn informed their Greek colleagues. 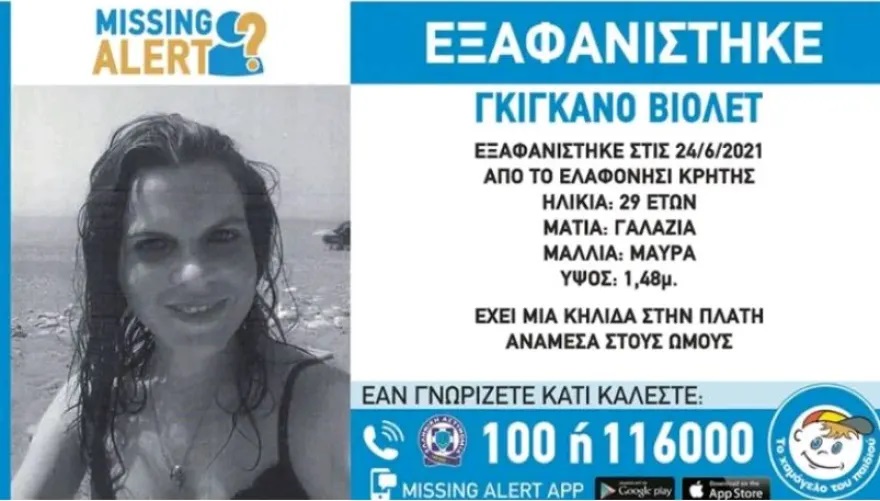 According to friends and relatives who posted her pictures on social media in a desperate attempt to enable people to recognize her, Gigano was a keen traveler and enjoyed nature and hiking.

The French woman arrived alone on Crete on June 21 for a seven-day vacation. After spending the first days near the city of Chania, she contacted her parents in France on June 24, saying that she intended to visit Elafonissi on the southwestern coast of Crete. That was the last contact she had with her family.

She booked a room for two nights at a hotel in the village of Palaiochora, not far from Elafonissi. Local media say that she never actually checked in.

The car was found abandoned in the area, containing her luggage and other belongings. Forensic experts are examining the vehicle for possible clues to Gigano’s killing.

Elafonissi is among the most visited beaches on Crete. It has become a very popular destination for day trippers who flood to this corner of paradise by car, bus or boat.

It is known for its pink sand beaches, created by tidal and wave-induced deposits of pigmented microorganisms living in a symbiotic relationship with native seaweed.

A police helicopter, police vehicles and rescue teams on foot had been combing the area for days.

Gigano’s disappearance brings back haunting memories of the case of Dr. Suzanne Eaton, the 60-year-old American researcher who was raped and murdered on Crete in July of 2019.

The culprit, 30-year-old Pantelis Zelios, who admitted he had intentionally run over Eaton with his car in order to disable and sexually violate her, was sentenced to life imprisonment.

He had related calmly and in horrific detail that he had raped and killed Susan Eaton and then taken the authorities to the cave where he had thrown her body.