GRNews
GreekReporter.comGreek NewsEconomyGreece Has Third Highest Debt to GDP Ratio in the World

Greece Has Third Highest Debt to GDP Ratio in the World

Greece has the third highest government debt as a percentage of gross domestic product (GDP) in the entire world, according to the latest statistics compiled by international organizations.

Government debt is often analyzed through the debt-to-GDP metric because it contextualizes an otherwise massive number.

Take, for example the U.S. national debt, which currently sits at over $27 trillion. In isolation this figure sounds daunting, but when expressed as a percentage of the U.S. GDP, it works out to a more relatable 133%. This format also allows us to make a better comparison between countries, especially when their economies differ in size.

According to the latest from the International Monetary Fund, the Debt-to-GDP for Greece is 210 percent. This makes the country third on the world list, behind Japan with 257% and Sudan with 212 percent. 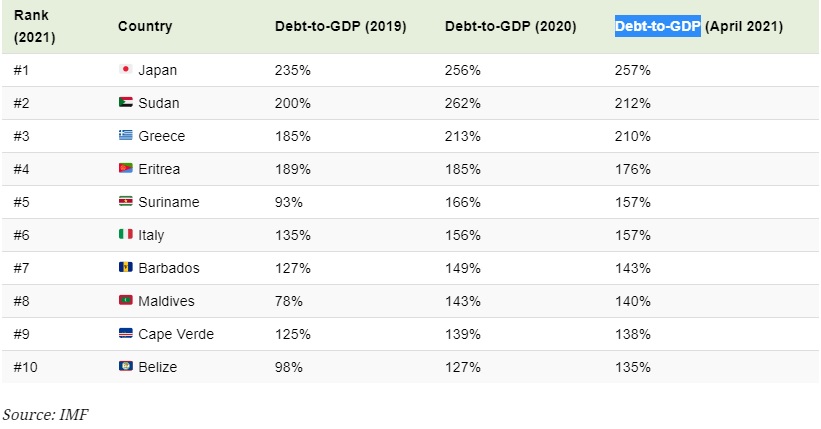 According to statista.com, a site dedicated to compiling economic data, the Greek debt-to-GDP ratio reached its peak in 2020. Starting from 2021 it will be gradually reduced to around 179 percent in 2026. 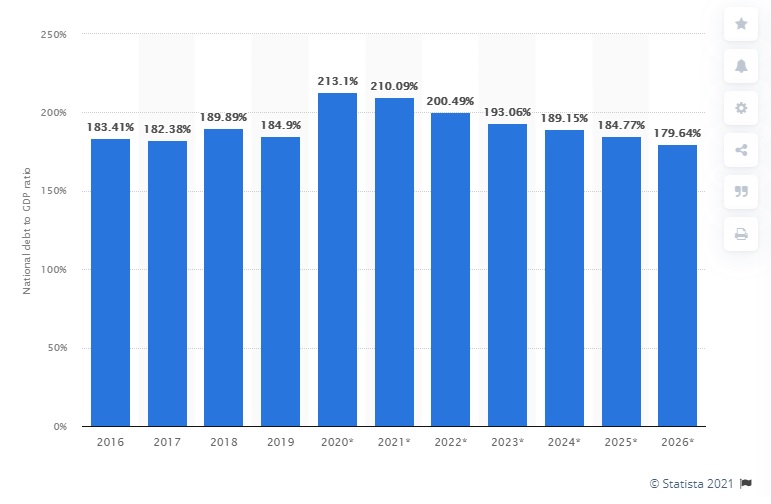 Most economists do not expect that Greece will be caught in the medium-term in a financial crisis similar to the one that hit the country in 2010. The Greek government debt crisis led to a series of sudden reforms and austerity measures that led in turn to impoverishment and loss of income and property, as well as a small-scale humanitarian crisis.

The projections for substantial growth in the next few years and the low interest rates that make debt servicing cheap, ensure that a repetition of the 2010’s crisis is improbable.

The Bank of Greece (BoG) said on Monday that economic growth will reach 4.2 percent this year. It projected the country’s economic growth to pick up next year to 5.3 percent but then ease back to 3.9 percent in 2023.

Although the projection is higher than the 3.6 percent for 2021 that had been estimated by the International Monetary Fund (IMF), the trend is set. The Vice President of the European Commission, Margrethe Vestager, said in May that “Greece may be the country with the highest growth rate in the eurozone next year.”

The BoG’s monetary policy report for 2020-21 highlights that attaining high and sustainable growth rates – to support the reduction of the public debt-to-GDP ratio – requires the quick and effective utilization of European grants and loans in order to give the economy a growth boost by accelerating public and private investments.

The BoG estimates that the “Greece 2.0” blueprint can add 6.9 percent to GDP per the baseline scenario and 8.5 percent per the optimistic version.

It warns however, that fiscal expansion, caused by a series of measures to support the economy during the coronavirus pandemic, “need to remain targeted and temporary in order to preserve public debt sustainability and prevent the health crisis from turning into a sovereign debt crisis.”

With specific regard to public debt, the BoG report adds, “its strong increase despite the low borrowing costs and the favorable repayment schedule eliminates all room for a relaxation of the long-term primary surplus targets and makes it all the more crucial to safeguard fiscal credibility, through a return to realistic primary surpluses and compliance with EU fiscal rules.”