Transgender Greek, Dimitri Kalogiannis, missing since April 6, was apparently the victim of a hit and run three days after disappearing. On Thursday, Kalogiannis’ brother tentatively identified the body from the traffic accident that occurred more than two months ago.

Kalogiannis was a transgender Greek who identified as a woman. Blue-eyed and slender, the 64-year-old was last seen wearing a red sweater and white pants.

There is enough television crime drama out there, that most people know that the first 24 hours a person is missing, is crucial to bringing them back alive and well. As time passes, the odds diminish.

The director and founder of Silver Alert has been bombarded with assaults as to why the alert was delayed more than seven weeks. Elderly and a member of the LGBTQ+ community, it appeared the transgender Greek had been marginalized.

Gerasimos Kourouklis, director of Silver Alert, said that the service was informed of Kalogiannis’ disappearance by her brother and Dromokaitio, a psychiatric hospital, in Athens’ western suburbs, on April 6.

“We filed the report to declare her missing immediately, but the police did not allow the process to proceed, because Kalogiannis is a fugitive from a psychiatric institution,” Kourouklis said. Silver Alert had not been informed that the process was frozen, according to the director.

“Wednesday, the social service authorities gave clearance to issue the silver alert,” said Kourouklis. Silver Alert is accountable to the prosecutor’s office, Kourouklis stated. “There had been pressure “from the hospital that we were hindering the process.”

Under attack by the community for delaying posting the alert, a technicality with Kalogiannis’ official identity also delayed the process.  Dimitris was not listed as Dimitra or even with the feminine pronoun, but as “Dimitris Kalogiannis.” According to Kourklis, Silver Alert does not have the same freedom to post information as television programs who’s collateral is finding missing persons.

The missing transgender Greek is registered on the municipality rosters and on her Greek Identity Card as “Dimitris Kalogiannis.” Kourouklis said, “In the hospital she is registered with this data. We were told we should have taken the initiative to list her as “Dimitra.” And let’s just say we did. The Prosecutor could tell us to remove the alert because the information is wrong.”

There have been two reports of alleged sightings of Kalogiannis in Evia and in Excharia to Silver Alert. They have not panned out.

Episodes of depression, attempted suicides, a toxic environment and violent confrontations regularly as a transgender woman were all part and parcel of Kalogiannis’ life. In the recent past, everything about sexuality was considered a mental malady.

Kalogiannis has ping ponged from chronic incarceration in clinics and years of being fed psychotropic medication to adjust the chemical makeup of her brain and nervous system. These medications were recommended to her family to treat her “mental illness” -declaring herself a female although she has the physical anatomy of a male. Fast forward 40 years and society has finally understood that gender identity and sexuality are not conditions to be fixed. 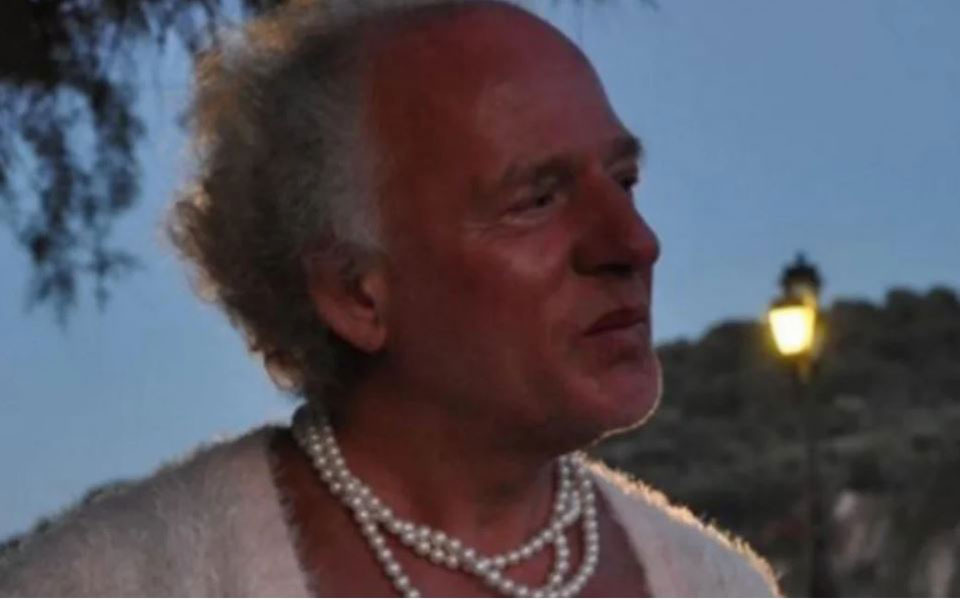 Kalogiannis life was a life of violence in times of violence for trans people. The family “put her away” for the first time when she was young, because she wanted to redefine her gender. After leaving the clinic, she returned to the island.  Without her knowledge, her family medicated her food. Running away from the small fishing village, she lived as a homeless person in Athens as a young adult.

The transgender Greek was raised in Skala Sykamnia, the fishing village in Lesvos that has gained recognition world wide as a reception point for refugees landing from Turkey.

At 14 she told her parents that she was a woman. Her parents, uneducated and shocked, reacted by admitting Kalogiannis to a psychiatric clinic.

Kalogiannis described her mother as deeply religious, a woman of faith and a source of true and selfless love for her child. Her father was a harsh man, who disappeared from the family home for long periods of time. When he returned, he was violent and abusive. Nonetheless, the family, that included other brothers, remained together and her parents remained married until their death.

Kalogiannis came back to Skala Sykamnia after living rough on Athens’ streets and being a ward of the psychiatric clinic. She lived with her mother in the family home. She nursed her parents until they died, six months apart. Losing her mother was a shock for Kalogiannis. She had been the only source of companionship and love in Kalogiannis’ life.

Although a devastating loss, for the first time the transgender Greek had the freedom to express her feminine identity without the censure of her parents. She began to dress exclusively in women’s clothing. With this shift in external expression, came a deep sense of relief and comfort. Kalogiannis started to feel better than she had in her entire life. She felt herself becoming whole for the first time.

The trans woman continued to be misunderstood by family and ostracized and taunted in the community. In 2015, with the refugee crisis bringing people from across the globe to the conservative fishing village, Kalogiannis captured the attention and compassion of volunteers and journalists headquartered temporarily on Lesvos.

Kalogiannis may have fallen through the cracks in a system of social services, but her presence was a known entity online prior to her disappearance in April. Kalogiannis has been the subject of two Youtube videos.

A short video entitled “Dimitris” was uploaded at the end of 2015. The 1.27 minute video features stills of Kalogiannis. It has had almost 150,000 views.

Rory Aurora Richards, a Canadian who volunteered to assist with the refugees in 2016, met Kalogiannis and wrote about her in the video’s descriptor. “Dimitri’s sense of self was not something that medication could dissolve, and throughout her teenage years she continued to insist that she was a girl to those that asked,” according to Richards.

“Her natural honesty ostracized her in the village, bringing gossip and shame to her family and more stress to her parent’s already strained marriage,” stated Richards.  Kalogiannis “did not experience any adolescent romances. Just a series of tragic, secret crushes on boys. There was little chance she would find a boy in the village that would return her feelings,” according to Richards.

Kalogiannis “was an outcast. She speaks candidly about struggling with suicidal thoughts her entire life, making several attempts at different stages of her life, starting as a teenager,” stated Richards.

This past December cinematographer Tzeli Hadjidimitriou uploaded a video of the interview she conducted with Kalogiannis in her home in Lesvos, titled “Mr. Dimitri and Mrs. Dimitroula.”

The 27-minute documentary has had more than 54,000 views. In the video, Kalogiannis discusses her early years, her mother’s attempted suicides, her father’s abuse, her time in Athens and her life on the island since she began wearing women’s clothing exclusively.

In December, local teens broke into Kalogiannis’ home in Skala Sykamnia. They uploaded videos jumping on furniture and shouting.

The transgender Greek was readmitted to the psychiatric clinic in Dromokaiteio. This time, the return to the clinic was not because of her gender identity. She went involuntarily placed there by her family with psychiatric justification as her environment had deteriorated.

“Proud Seniors Greece,” stated on their Facebook page, “We offered to act as a mediator, attempting to communicate with various agencies in Mytilene with the main concern, as we had explicitly stated at the time, the provision of support, care and to avoid any practice that could potentially be particularly traumatic for her. All our efforts focused on keeping her at home, in her familiar space, providing her with free care.”

Proud Seniors Greece is an LGBTQ+ support group for individuals 50 years old and above. The public group was established in 2015 in Greece and has 3200 members.

According to the post from the social media group, they were not able to intervene individually or collectively. “Due to bureaucratic and legal obstacles, we could not intervene as only blood relatives are the legal representatives who made the final decisions. It was not possible to establish a support framework as we described.” Until she went missing, “We received sporadic information about the Dimitra’s health from a person close to her,” the post stated.

Proud Seniors Greece posted, “We believe that the people in charge of “Dromokaitio” have a great responsibility. We wholeheartedly hope that Kalogiannis will be found safe and sound. And that everyone responsible will be held accountable.”

According to Kourouklis, the service will proceed with a lawsuit seeking responsibility for Kalogiannis situation. “The question is how she can be reintegrated and properly receive the help needed.”  He added he could not understand how an individual who chooses to be themselves ends up in a psychiatric hospital.

“We are preparing an indictment against those from this man’s environment who are responsible for this abuse, for the chronic imposition of psychiatric pills, for how this man was led to this situation. I have taken a paternal interest in this case,” Kourouklis said.

Lifeline Hellas was founded in May 2006 by Kourouklis.  Established to effectively support the elderly, it was configured by individuals with expertise and experience in the field of social care as well as the physical and mental health for aging adults.  Growing out of  Lifeline Hellas came the Silver Alert program.

Silver Alert, is the National Coordination Program for timely and valid notification of citizens in cases of disappearance of the elderly. Until 2011, the only way to search for elderly people that disappeared because they had Alzheimer’s disease was with the  assistance of the Greek Police and  the efforts of relatives and friends.

The Toll Free number for Silver Alert in Greece is 1065.