Greek Woman Abused by Former Ambassador of Venezuela Speaks Out

A Greek woman, former employee of the Embassy of Venezuela in Greece, spoke on Thursday for the first time about the sexual abuse she suffered from the country’s former ambassador to Athens and the political cover-up that happened eight years ago.

Xenia Bouzaranidou appeared on Mega TV on Thursday and spoke of her ordeal between October of 2012 and July 13, 2013, when she was working as a chef in the embassy’s kitchen.

She said that then-Venezuelan ambassador Franklin Gonzalez sexually assaulted her repeatedly, and continuously made lewd comments to her and other female employees.

She said that after she and four other fellow employees reported the sexual abuse incidents, she was the one who pressed charges against the ambassador.

Bouzaranidou said that after her complaints in 2013, a SYRIZA politician, whom she did not name, approached her. “He told me that I should show political maturity and remain silent and solve the problem among ourselves,” she says.

“We showed political maturity,” she adds.

Three of the women who were involved were fired before her. Bouzaranidou was fired almost two years later — but she was the one who found the strength to take legal action.

The fifth woman took legal action later, but her case has not been heard yet.

The Greek woman has been vindicated by a Greek court, with a decision issued in March of 2019. However, to date, the decision has not been executed.

The Greek Foreign Ministry has not signed the papers for her compensation due to diplomatic protocol.

Greek-Venezuela cover-up in a time of turmoil

During the years when the sexual assault incidents took place, Greece was in political turmoil. The economic crisis had divided Greek society, with the coalition government receiving fire from the whole of the political spectrum.

It should be noted that from October 2009 to May 2012, Greeks went to the polls three different times, and in 2012 ended up with the coalition of arch-rivals New Democracy and PASOK.

It was a time when the rhetoric of SYRIZA leader Alexis Tsipras was preparing Greeks to vote for the first leftist government in Greece.

After blaming the previous governments for neoliberal politics and holding them responsible for Greece’s economic disaster, Tsipras promised to relieve Greeks from their economic woes.

When the Venezuelan embassy scandal broke out, SYRIZA, which was extremely friendly with the socialist Venezuelan government of Nicolas Maduro, initially tried to downplay the sexual assault case.

New Democracy tried to capitalize on the fact that the leftist party was eager to cover up the case so as not to hurt the centrist image of the party.

Tsipras’ letter to President of Venezuela

The SYRIZA leader sent a letter to Venezuelan President Nicolas Maduro and, among other things, asked him to replace the ambassador, who was also the president’s personal friend as revealed by Greek daily To Ethnos:

“Finally, a sensitive issue. I hope you contribute and deal with it in the best way. It is already known to you when you asked about the new Ambassador to Athens. So far, the Embassy staff has shown political maturity and in no case will take action in Greece to publicize the problem, a fact that will be used by the systemic media to the maximum, to attack the Left, both in Venezuela and in Greece.” 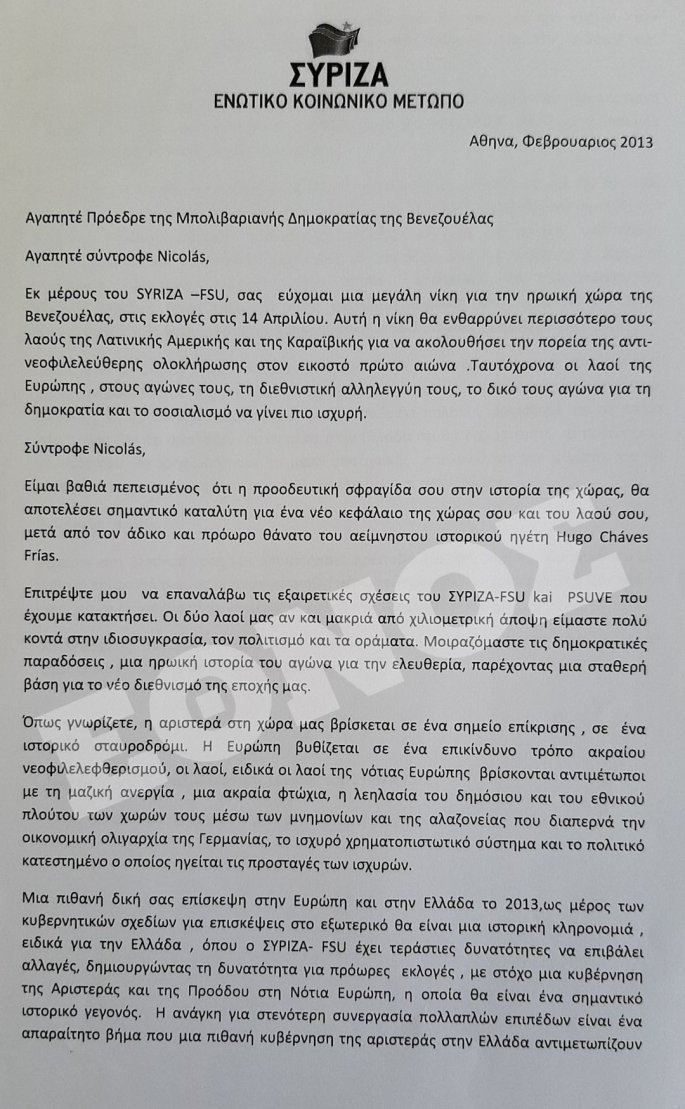 In the letter, Tsipras also wrote that his political opponents would try to undermine SYRIZA, the leftist Venezuelan government and leftist ideals by using any means at their disposal.

“The embassy remained headless until December 2013, when Farid Fernandez took over as Venezuela’s ambassador a few days earlier in order to take up the post,” Bouzaranidou told Greece’s Ethnos newspaper.

“The ‘rape’ continued on a professional and authoritarian level by Farid who was ordered by Maduro to lead us to resign,” she added, saying that she was finally fired on November 3, 2015.

After that, the Greek woman proceeded to take take legal action until her vindication.

Bouzaranidou said that her name was not known publicly until now. However, she said she decided to speak to the press about her ordeal in the embassy of Venezuela after she saw a debate in the Greek Parliament.

She said that when she watched Prime Minister Kyriakos Mitsotakis and main opposition leader Alexis Tsipras speak about sexual harassment, she found the discussion hypocritical.

She said that the words of the two political leaders hurt her and made her angry at the same time, making her another #MeToo victim, still seeking justice after eight years.