The Greek War of Independence is being celebrated in three parallel digital exhibitions as a result of the collaboration of the nation of Cyprus and the city of Naples, Italy.

The exhibits are a joint project of the State Archive of Naples, the General Archives of the State (Greece) and the Society for Cypriot Studies (Cyprus).

The Covid-19 pandemic has unfortunately forced the organizers to present the exhibition celebrating the 200th Anniversary of the Greek War of Independence in a digital version only at present.

However, according to the organizers, when public health conditions allow, the exhibition will also take place in physical form.

The exhibition deals with the 1821 Greek uprising from pre-revolutionary times to the founding of the modern Greek state and the Ioannis Kapodistrias period.

For the very first time ever, anecdotal archival exhibits shed new light on the rebirth of Greece, the Kingdom of the Two Sicilies, Philhellenism, and the participation of Cyprus in the great struggle.

Utilizing virtual reality and online browsing, those interested will be transferred to the State Archive of Naples, and can browse the entire exhibition through a virtual tour. 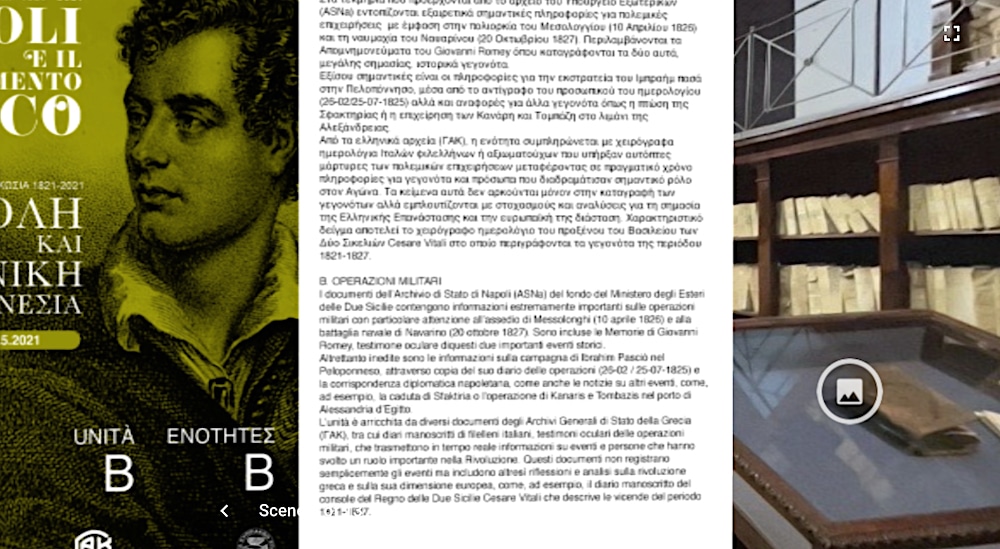 At the same time, visitors can admire unique 16th century artworks, with frescoes by Greek painter Velisarios Korensios from Kyparissia, who lived from the mid-16th to the mid-17th century.

A total of 157 exhibits from the archives and collections are organized in the following five sections:

Officials of the Kingdom of the Two Sicilies and its diplomats played an important role in the Greek War of Independence.

Sicilian diplomats had many contacts with international powers and the Ottomans, investigating the conditions before, during and after the uprising.

Many diplomatic meetings took place in cities such as Alexandria, Constantinople and Tunis, in the interest of the Kingdom of the Two Sicilies.

The relations of the Kingdom of the Two Sicilies with Ali Pasha of Ioannina was also important. The two sides exchanged important correspondence, which began in the pre-revolutionary period and lasted until Ali Pasha’s death.

In the same section, the visitor can also see encrypted reports of the actions of a Naples secret agent who operated in Greece from 1828 to 1831.

The content of the reports is based on the monitoring of Neapolitan liberals who had taken refuge in Greece during the 1821 Revolution.

In a more sinister vein, references are also made to the efforts of political manipulation of the first governor of Greece, Ioannis Kapodistrias, by Sicilian authorities.

Documents containing important information about military operations with emphasis on the Siege of Missolonghi, in April 1826, and the naval battle of Navarino, which took place on October 20, 1827. 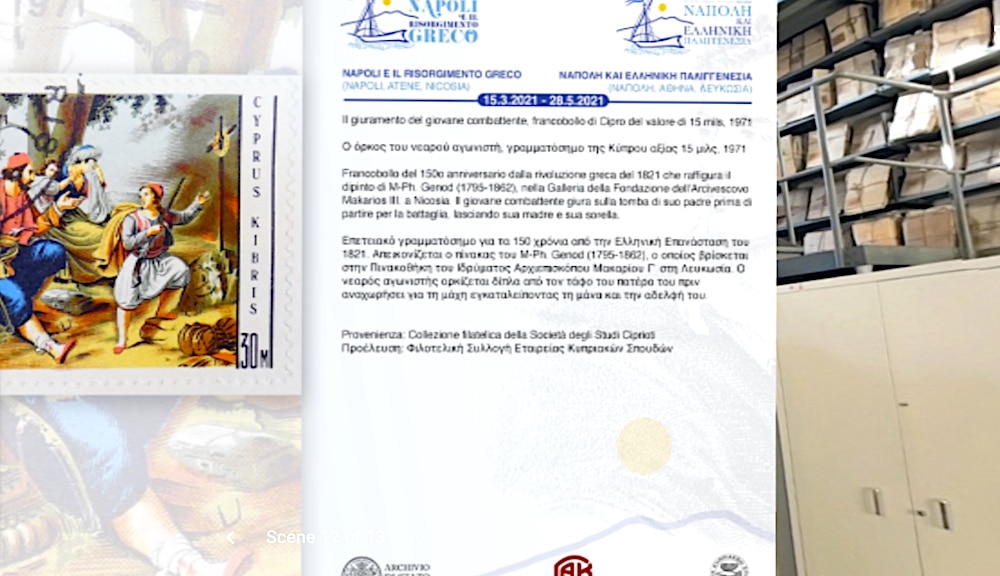 Equally important is the information about the campaign of Ibrahim Pasha in the Peloponnese, as seen in his staff’s papers from 1825.

References to other events such as the fall of Sfaktiria and the naval operations of Konstantinos Kanaris and Iakovos Tombazis in the port of Alexandria are also included.

Greek fighter ships caused upheaval in the overall movement of European cargo and cruise ships during the Greek War of Independence, while fighter ship captains tried to prevent smuggling into enemy territory in violation of neutrality rules.

They were also responsible for the safety of European ship crews and the safe transport of their cargo.

However, in many cases, the captains of Greek ships did not simply exercise control of sea traffic but acted like pirates. Complaints against Greek ships were tried before the Maritime Court. Such archives are provided by Greece’s General Archives of the State.

The exhibit visitor may also look at files with the appeals of captains from Naples and Sardinia that had been presented in the Maritime Court.

The presence of Italy and Italian philhellenes in the Greek War of Independence was strong, as recorded in the archival documents of the General Archives of the State (Greece).

A number of Italians joined the military corps, worked in administrative positions and helped as doctors and medical staff during the struggle, and several lost their lives during the war.

Before the uprising, Italy had provided the safe environment required for planning the war, enlisting philhellenes and communicating with compatriots in Greece.

The majority of the Italian military, which have been identified in the Greek archives, come from Naples, Sardinia and Sicily. Later, they were honored by the new Greek State.

Several Cypriots were initiated as members of the Filiki Eteria (Society of Friends) in order to prepare for the Revolution.

The Archbishop of Cyprus, Kyprianos, and several other important prelates of the island, secretly offered their assistance, in the form of money, for the purposes of the Filiki Eteria.

Attempts are also being made to map the participation of Cypriot fighters in the Greek War of Independence and the services they provided.

Documents now in the exhibit show the course of rebelling Cypriots and their families who were persecuted and forced to leave Cyprus in search of refuge in Western Europe.

Important documents describing the massacres of the revolt on the island were contributed by the Society of Cypriot Studies.

Documents from the General Archives of the State also show the movements of a group of Cypriots in Nafplion, in order to prepare the secret campaign against Lebanon.

The movement in Lebanon, which took place from 1824-1826, was a distraction in the fight against the Turks.

Finally, the section includes the efforts of Cypriots to convince Governor Ioannis Kapodistrias to use his influence in Europe in order to help liberate the island.