US Cities to Illuminate Landmarks in Greek Colors on March 25

On March 25, 2021, landmark buildings and bridges around the United States will light up in the white and blue of the Greek flag in commemoration of the Bicentennial of the Greek War of Independence.

The iconic pillars at LAX, the city of Los Angeles’ international airport, will be illuminated in the colors of Greece on the day and the Greek flag will also be raised at the California State Capitol Building in Sacramento.

Other buildings and areas which will also be illuminated to show respect for the Greek Bicentennial are the Richards/I-5 underpass, the Capitol Mall, the K street Tunnel, City College Pedestrian Bridge, Memorial Auditorium and the McKinley Underpass.

“Our Greek community in California is working together in unison to pay tribute to those who stood up to tyranny, sacrificed their lives in the fight against oppression, and bravely liberated Greece from occupation” said UHAS President Taso Zografos.

“Hellenes and Philhellenes around the world continue to stand united in defense of freedom and liberty for all.”

The UHAS has also received word that the Greek Flag will be raised for the duration of an entire week at South San Francisco City Hall and Fresno City Hall.

The Santa Monica Pier’s “Pacific Wheel” will also have a special, evening-long Light Show for Greek Independence Day on the 25th.

The office of the Lieutenant Governor of California, Eleni Kounalakis, also assured organizers that the Greek flag will also raised at the State Capitol.

According to Greece’s Consul General Stratos Efthymiou in Boston, five iconic bridges across the state of Massachusetts, including the cable-stay Zakim Bridge, will be illuminated with the colors of Greece in celebration of Greece’s independence as well.

The Consulate says in a Facebook post: “Friends of all ethnicities and faiths join us to commemorate this unique moment and to celebrate the ideals of freedom, democracy, and justice.

“On the 25th of March, we remember the romantic poet Percy Bysse Shelley and his words: ‘We are all Greeks. Our laws, our literature, our religion, our arts have their root in Greece.'”

To celebrate the Bicentennial and to commemorate the many hundreds of thousands of Greek immigrants to New England, two iconic Boston bridges and three others in cities with historic Greek-American communities settled in the late 19th century will also be lit up in the blue and white.

Boston will illuminate the cable-stay Zakim Bridge, the largest bridge in the city, located adjacent to TD Garden, the historic Boston Celtics stadium. The other city span to take on the colors of the Greek flag will be the beloved Longfellow Bridge, designed by the great Bostonian architect Edmund Wheelwright.

This was the man who left his imprint on the architecture of the entire city, who also designed the building of the Consulate General of Greece in Boston, which stands proudly at 86 Beacon Street, in the early 20th century. 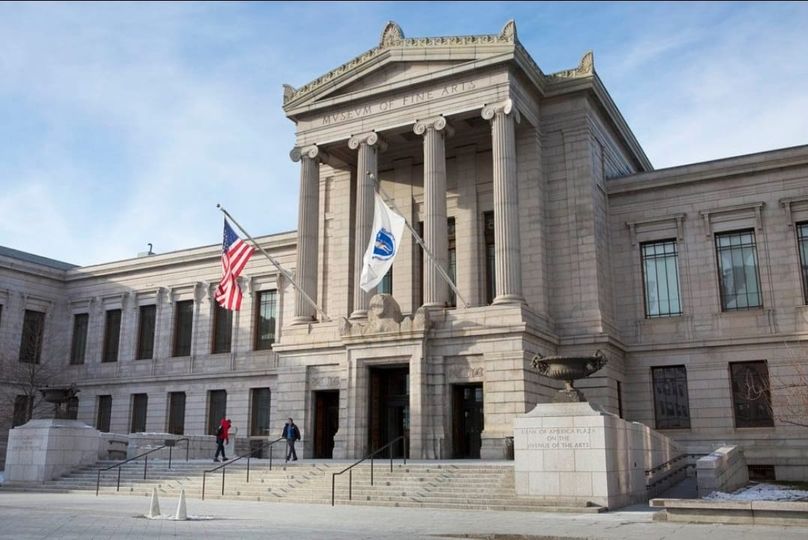 The venerable Boston Museum of Fine Arts will also be bedecked in the blue and white of the Greek flag to mark Greek Independence Day tonight, Wednesday, and Thursday, March 25.

To celebrate the 200 years of freedom after the Greek Revolution, the Boston Museum of Fine Arts, one of the world’s top museums, featuring the exceptional George D. and Margo Behrakis Wing for Art of the Ancient World, will join in the effort to light buildings and bridges around the world in blue.

Greek Independence Day is celebrated annually on March 25th. On the nights of the 24th and the 25th, the Museum will light its grand Huntington Entrance blue and install two Greek flags at the Entrance as well.

Massachusetts Governor Charlie Baker and Lieutenant Governor Karyn Polito, in an effort to honor Greece and the Greek-American community, will also illuminate bridges in Lowell, Worcester and Fall River, while other illuminations of public buildings and town halls will take place around the state.

Manchester, New Hampshire will also illuminate the town hall and plans are underway for the illumination of the gigantic Pisacataqua River Bridge which links the states of New Hampshire and Maine.

Thanks are especially due, Efthymiou says, to Worcester Sheriff Lew Evangelidis and Lieutenant Governor Karyn Polito in the effort to recognize and celebrate the Greek bicentennial and the contributions of Greek-Americans to the state of Massachusetts.