Several buildings collapsed as an earthquake measuring 6.0 on the Richter scale shook central Greece at 12:16 PM local time on Wednesday. There are no reports of injuries.

The tremor struck 121 km (75 miles) SW of Thessaloníki near the town of Elassona in the region of Larissa.

The worst hit village in the area is Mesohori, near Elassona where the local church and some old houses were badly damaged.

The earthquake was felt in Larissa, Trikala, Kozani and Thessaloniki.

Footage shows residents of Larissa taking to the streets.

The Mayor of Elassona, Nikos Gatas, said that he has already given an order to begin inspections for any damage to all public and municipal buildings.

Seismologists expressed uncertainty about the progression of seismic activity in Elassona after the quake and a succession of aftershocks.

Professor of Seismology at the Aristotle University of Thessaloniki Costas Papazachos did not rule out the possibility of a strong aftershock of the same magnitude as the initial tremor, adding that a series of aftershocks will follow.

Papazachos noted that schools should not open on Thursday for any reason, adding that people should remain cautious and not go back indoors for some hours.

Professor of seismology at the Aristotle University of Thessaloniki (AUTH) Manolis Skordilis said that “In all likelihood this was the main earthquake.”

Speaking to the Athens-Macedonian News Agency (AMNA), he added: “The rift in the area has caused earthquakes in the past. The most recent was in the 18th century. It was in 1781, with a magnitude of 6.2 Richter. The earthquake that took place today is in the range of the earthquakes occurring in the area,” he said, 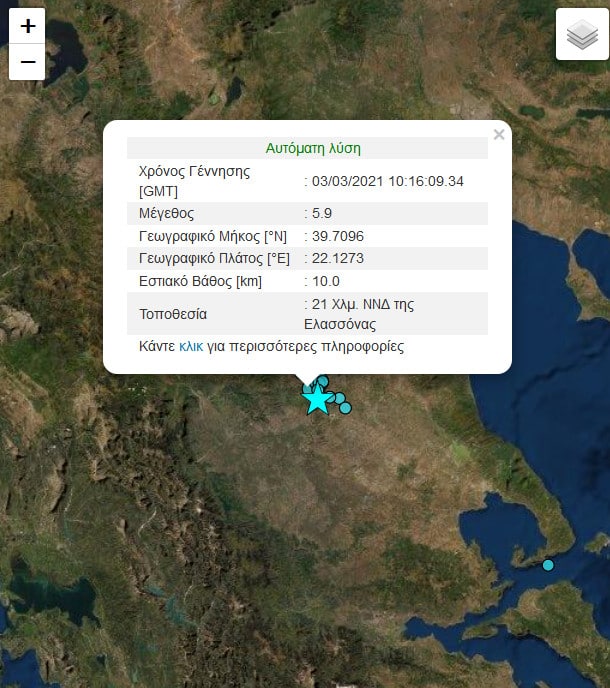 Greece lies in a highly seismically active region. The vast majority of earthquakes cause no damage or injuries.

The country is located in a complex boundary zone in the eastern Mediterranean between the African Plate and the Eurasian Plate.

The south Aegean is the location of the volcanic arc and is characterized by extension. To the east of Crete along the Hellenic Arc, strike-slip tectonics with some extension become important.