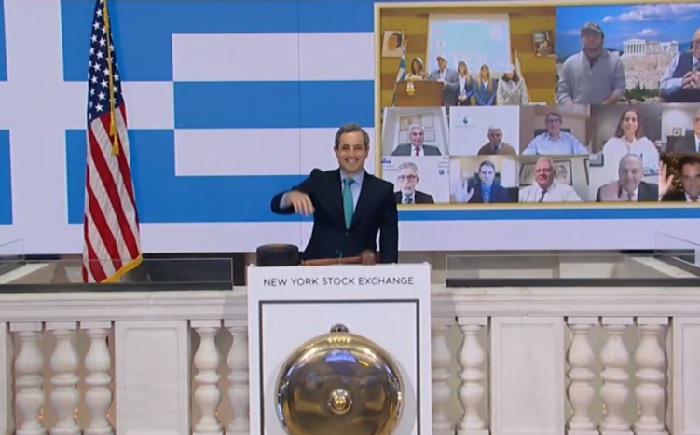 More than 100 top level speakers, from the Greek and international government, business and financial communities, offered to a global audience an authoritative and insightful blueprint of the state of the Greek economy during the “22nd Capital Link Invest in Greece” Forum  which took place in digital form earlier in December.
The Forum entitled “Greece – Looking Ahead With Confidence”, gave special emphasis to the business and investment opportunities in Greece and the wider region.
It was organized in co-operation with the New York Stock Exchange and major Global Investment Banks and Organizations.
The Forum provided an effective platform and the perfect timing for communicating the Prime Minister’s on the government’s 12 initiatives to support the economy, which he described as “12 steps of confidence”, and “bridges that will transfer Greece and the Greeks from the health and economic turmoil to the calm waters of progress and hope”.
Led by the Prime Minister, several key Greek ministers outlined their specific programs and policies in the sectors of their portfolios in order to achieve the shift of the economy to a new, sustainable development model for Greece of tomorrow.
A top-level group of CEOs and other executives discussed trends, developments and opportunities for each of the main areas of the economy. A group of international investors shared their insight and shed light to the reasons that lead them to choose Greece as a business and investment destination and what lies ahead.
Greek start-ups
Many participants highlighted the flourishing start-up scene in Greece.
“The 10 year recession Greece faced has ultimately given birth to a flourishing start-up scene and a very vibrant ecosystem. In the years following the Greek crisis,
entrepreneurship in Greece has emerged as a key lever for growth restoration and job creation,” said Jimmy Athanasopoulos, Chair – Envolve Entrepreneurship; Libra Greece Representative – Libra Social Responsibility Libra Group.
“Greece’s start-up environment has entered a new phase of maturity with a growing number of investors offering their backing and support to local innovation,” he added.
Kevin Ryan, Founder & CEO – AlleyCorp, noted “the great promise in Greek startups, and in the growth and development of the Greek technology ecosystem.”
He said that “the continued rise of entrepreneurship will of course be significant for Greece itself, but there is also considerable opportunity for Greece to play an outsized role in the forward-motion of European tech advancement more broadly.”
«Greek American Issuer DAY» at the NY Stock Exchange
Within the context of the 22nd Annual Capital Link Invest in Greece Forum the New York Stock Exchange in cooperation with Capital Link organized a special ceremony in honor of Greece titled “Greek American Issuer Day at NYSE”.
On Tuesday, December 15th, 2020, the New York Stock Exchange (NYSE) held an official
reception, in digital form, in honor of the Greek Delegation, Greek & Greek- American
companies listed on the New York Stock Exchange.


Adonis Georgiadis, Minister of Development & Investments of the Hellenic Republic, and Dr. Nikolas P. Tsakos, President and CEO, Tsakos Energy Navigation (NYSE: TNP); Chairman, INTERTANKO 2014-2018, rang The Closing Bell accompanied by Captain Panagiotis N. Tsakos and several representatives of NYSE listed companies.
The event was broadcasted live on major news stations in the United States and abroad to an estimated audience of 150 million viewers worldwide.
Over the years, Capital Link Invest in Greece Forum has developed to become an International Summit about Greece, recognized as the main platform for updating US investors on developments in Greece, business and investment opportunities and the attractiveness of Greece as an investment destination.
It gathers the elite of the financial and investment communities, as well business and government leaders from the United States and Greece.