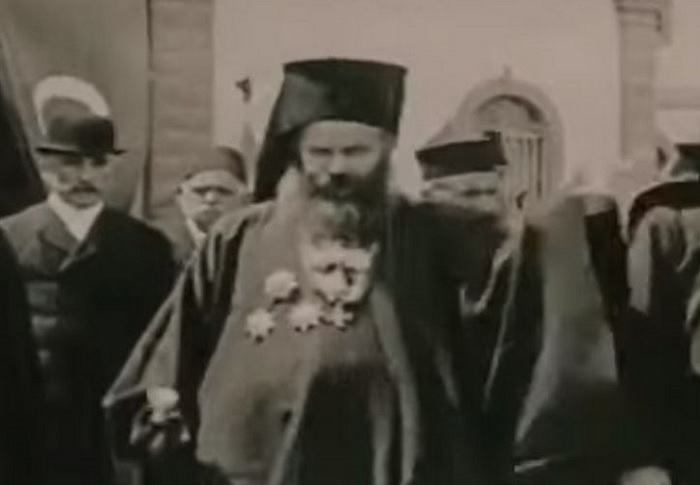 On September 10 or 11, 1922, just two days before the great fire of Smyrna which marked the end of Hellenism in Asia Minor, a Turkish mob brutally lynched Metropolitan Chrysostomos, the spiritual leader of the Greek Orthodox in Smyrna.
Despite the advance of the Turkish forces and the reign of terror imposed on the Christian population of the once-great city, Chrysostomos had refused to abandon his people.
He was arrested by the Turkish commandant, Nureddin Pasha, following the celebration of the Divine Liturgy in the Church of Saint Photini, and surrendered to an angry Turkish mob. He died after being horrifically tortured.
Historian Giles Milton, whose book “Paradise Lost: Smyrna 1922: The Destruction of Islam’s City of Tolerance” contains some of the most graphic details of the last days before the destruction of the city.
It describes what happened to Chrysostomos, according to French soldiers who witnessed the lynching, but were under strict orders from their commanding officer not to intervene:
“The mob took possession of Metropolitan Chrysostom and carried him away… a little further on, in front of an Italian hairdresser named Ismail … they stopped and the Metropolitan was slipped into a white hairdresser’s overall. They began to beat him with their fists and sticks and to spit on his face. They riddled him with stabs. They tore his beard off, they gouged his eyes out, they cut off his nose and ears.”
Chrysostomos was then dragged around the city by a car or truck into a back street of the Iki Cheshmeli district where he died soon afterward.
Rare footage of the martyred Metropolitan Chrysostomos of Smyrna appeared online recently on the YouTube channel “Bahriye”. The footage begins with shots of Smyrna and the surrounding area, and Chrysostomos is seen around the 1:25 minute mark.

Chrysostomos Kalafatis served as the Greek Orthodox metropolitan bishop of Smyrna between 1910 and 1914, and again from 1919 until his death in 1922. He was born in Triglia (today’s Zeytinbağı), Turkey in 1867.
He was declared a martyr and a saint of the Eastern Orthodox Church by the Holy Synod of the Church of Greece on November 4, 1992.