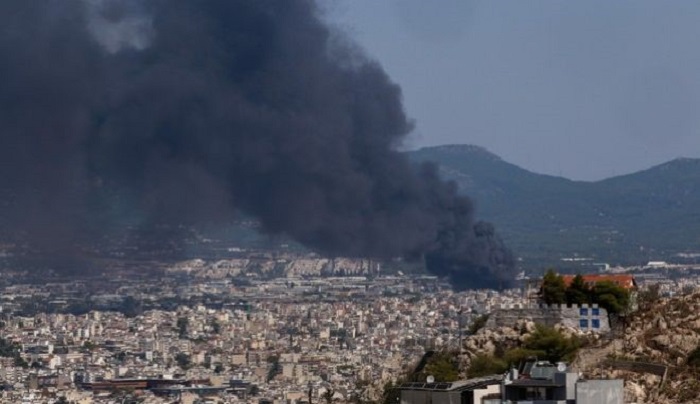 Greek firefighters are struggling on Sunday to put out a fire in a plastics recycling factory that broke out the day before in northern Athens releasing dangerous toxic fumes in the atmosphere.
With text messages in mobile phones, the Civil Protection Agency advised residents of Metamorfosi and neighboring suburbs in north-western Athens to shut windows and doors and avoid unnecessary movement. The messages urged further those filling ill to immediately get in contact with doctors.
The fire broke at the factory located near the main Athens to Thessaloniki highway early on Saturday morning. Police had shut the highway as a a precaution.

Speaking to OPEN TV, a Fire Service spokesperson stated that part of the factory had collapsed. He added that the blaze is difficult to tackle due to the nature of the materials that burned.
Christos Zerefos, an expert on atmospheric physics, said speaking to Mega Channel said that the substances released from the burning of plastics are particularly toxic. “When plastics are burned at a high temperature, very toxic substances are released.”
Zerefos added that residents must make sure to place wet towels on the doors and windows to minimize the amount of suspended particles that can enter the house.
Michalis Petrakis, former Director of the Environmental Research Institute, speaking to SKAI TV said that these toxic substances may prove to be particularly harmful to health, while his assessment is that the toxic cloud can reach as far as Crete.
He also noted that in other Western countries such incidents are punishable by heavy fines because they are too dangerous to health.
The Fire Service is conducting an investigation on the causes of the fire.