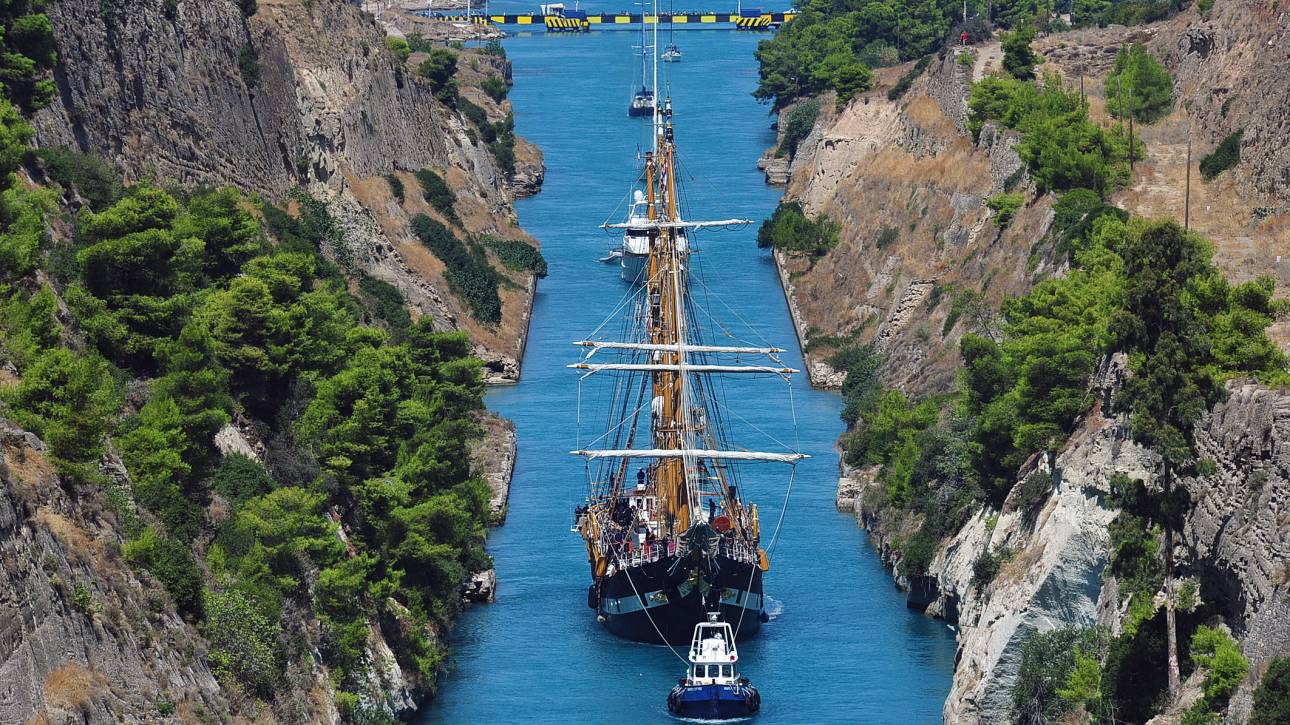 July 25, 1893, marks the day of the inauguration of the Corinth Canal, one of the most important infrastructure works of the modern Greek State that changed maritime activity.
Also known as the Isthmus of Corinth, the canal connects the Ionian and the Aegean making the passage of cargo and passenger ships between the two seas much quicker.
Construction works started in 1882 and the canal was inaugurated by then Prime Minister Sotirios Sotiropoulos, but it was envisioned and completed by his predecessor Harilaos Trikoupis whose term had ended only two months before that date.
Before the canal was built, ships from the Ionian Sea with destination Athens or the Aegean islands had to go around the Peloponnese peninsula and vice versa. After 1893, cargo and passenger ships would only have to cross the Corinth Canal and reach their destination much quicker.
The word “isthmus” comes from the Ancient Greek word for “neck” and refers to the narrowness of the land. The idea for a shortcut to save boats sailing all round the Peloponnese was long considered by the Ancient Greeks. The first attempt to build a canal there was carried out by the tyrant Periander in the 7th century BC. He abandoned the project owing to technical difficulties, and instead constructed a simpler and less costly overland stone ramp, named Diolkos, as a portage road. Remnants of Diolkos still exist today next to the modern canal.
When the Romans took control of Greece, a number of different solutions were tried. Julius Caesar foresaw the advantages of a link for his newly built Colonia Laus Iulia Corinthiensis. By the reign of Tiberius, engineers tried to dig a canal but were unable to make it due to a lack of modern equipment. Instead, they used an Ancient Egyptian device: boats were rolled across the isthmus on logs, as the Egyptians had rolled blocks of granite to make their pyramids.

In 67 AD, Roman emperor Nero ordered 6,000 slaves to dig a canal with spades. Historian Flavius Josephus writes that the 6,000 slaves were Jewish pirates, taken captive by Vespasian during the Jewish wars. According to Pliny the Elder, the work advanced four stadia (about 0.8 kilometers). The following year Nero died, and his successor Galba abandoned the project as being too expensive.
In the modern era, the idea was first seriously proposed in 1830, soon after Greece’s independence from the Ottoman Empire. Greek statesman Ioannis Kapodistrias hired a French engineer to put together a realistic project — which ended up with an estimated steep cost of 40 million gold francs — making Greece abandon the costly project once again.
Soon after, inspired by the construction of the Suez Canal, Prime Minister Thrasyvoulos Zaimis signed a law in 1870 that authorized the engineering project of the Corinth Canal. A French company oversaw the project that resulted in the construction phase starting and soon after ending — again due to cost issues.
The dream of the Corinth Canal would finally become a reality when in 1881, the Société Internationale du Canal Maritime de Corinthe was commissioned to construct the canal and to operate it for the next 99 years. Construction began in April 1882, however, eight years later, Greece ran out of money. This time, a Greek company stepped in and the canal was finally completed in July of 1893.
To the west of the Isthmus is the Gulf of Corinth, to the east the Saronic Gulf. Since 1893 the Corinth Canal has run through the 6.3 km wide isthmus, effectively making the Peloponnese an island. Today, two road bridges, two railway bridges and two submersible bridges at both ends of the canal connect the mainland side of the isthmus with the Peloponnese side. Also a military emergency bridge is located at the west end of the canal.

Drinking on the Greek Island of Delos: Bring Your Own Water