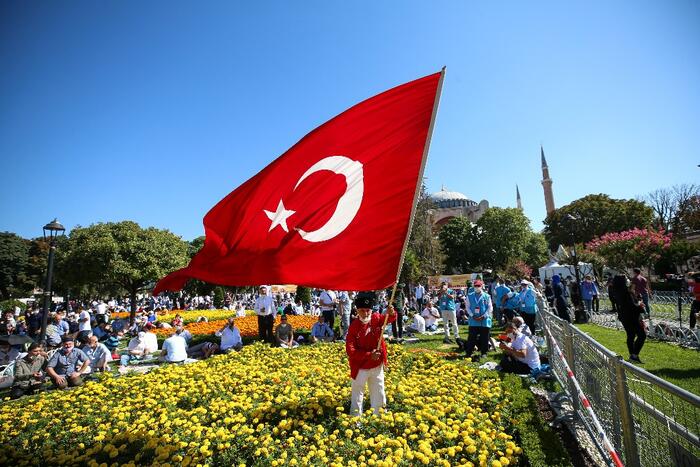 Thousands of worshipers, many waving Turkish flags, gathered at Hagia Sophia for Friday prayers as the UNESCO World Heritage Site was officially inaugurated as a mosque.
The 1,500-year-old site became a museum in 1934. But earlier this month, a Turkish court annulled Hagia Sophia’s museum status, saying its use as anything other than a mosque was “not possible legally”.
Turkey’s President Recep Tayyip Erdogan then announced that the world-famous site would be used as a mosque for Friday prayers from 24 July, a move that has become a cause of celebration for Muslims in Turkey.
Erdogan is scheduled to attend the inaugural prayers inside the monument along with around 500 dignitaries, as he fulfills what he has described as the “dream of our youth” anchored in Turkey’s Islamic movement.

The interior of Hagia Sophia, which was served as a Christian Byzantine cathedral for 900 years, was modified for the occasion.
A turquoise carpet was laid on the floor to prepare for prayers and Christian relics were covered up with white drapes or obscured by lighting. Among the Christian mosaics obscured during Muslim prayer was the ninth-Century mosaic of the Virgin Mary and Jesus inside the apse.


The lead up to the prayer was marked with Islamic rites, such as the takbir and salavat, which are invocations of God’s greatness and salutations upon the Prophet Muhammad. Verses from the Quran were also recited before the actual prayer.
On Thursday Erdogan unveiled the new Hagia Sophia nameplate. It reads “The Hagia Sophia Grand Mosque.” 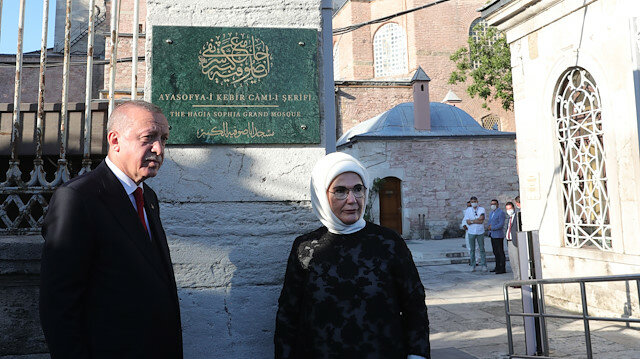 Outside Turkey, the change has raised alarm and despair, but Turkey has said what Turkish people want is of most importance.
– Ecumenical Patriarch Bartholomew, spiritual head of 300 million Orthodox Christians, said altering the status of Hagia Sophia would fracture Eastern and Western worlds.
– In neighbouring Greece, an overwhelmingly Orthodox country, Prime Minister Kyriakos Mitsotakis said: “This is a choice which offends all those who also recognise the monument as a World Heritage Site.”
– A spokesman for the US State Department said the United States was disappointed by the decision but looked forward to hearing Turkey’s plans for continued stewardship of the Hagia Sophia to ensure it remains accessible to all.