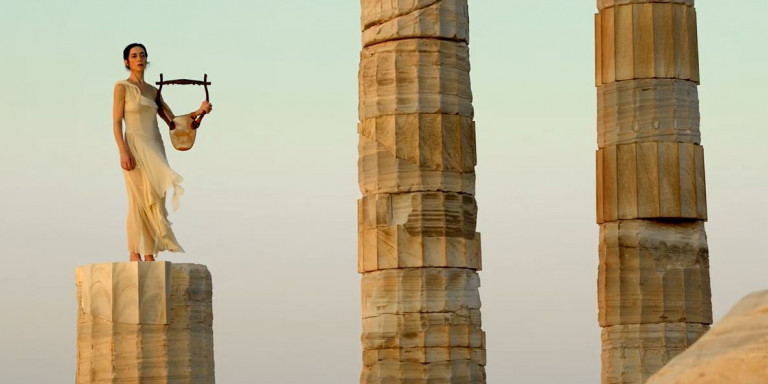 A performance of the ancient Greek play “The Persians,” by Aeschylus, will be streamed live to a global audience on Saturday, July 25, from the ancient theatre of Epidaurus.
As part of this year’s Athens and Epidaurus Festival, the National Theatre of Greece, with the support of the Greek Ministry of Culture and Sports, will present the play in commemoration of the 25th centennial of the Battle of Salamis.
The event marks the first time that a major ancient Greek drama production will be live-streamed, as well as the first time that any event at all has been live-streamed from Epidaurus.
Greek Prime Minister Kyriakos Mitsotakis stated that the first-ever live-streamed performance from the ancient theater site is “a pivotal moment, as humanity is still challenged by the Covid-19 pandemic.”
The Greek Premier continued on to say that “this performance comes at a critical juncture, to underscore the universality of the principles that led to the construction of the Ancient Theater of Epidaurus, a UNESCO World Heritage site, 2300 years ago. The Persians, Aeschylus’ most important anti-war play, dramatizes the naval battle of Salamis, one of the most decisive battles in the history of humanity, constantly recalling the timeless values of democracy and freedom.”
Greek Minister of Culture and Sports Lina Mendoni stated that “Our goal this summer has been to prevent Covid-19 from affecting cultural events and leaving artists without employment and local communities without additional revenues. The Athens and Epidaurus Festival and the National Theatre of Greece, two major cultural institutions supervised by the ministry, share our beliefs and thus creatively adjusted their scheduling to the new reality.”
The theater of Epidaurus, the masterwork of the architect Polycleitus, is connected to healing and the holy site is dedicated to Asclepius, the god of medicine and father of goddess Hygeia, who personified health. Music and dramatic contests hosted at the theater were part of the patients’ therapy in ancient times, as they prayed to be healed.
“It is therefore quite fitting that in 2020, when the entire planet is being tried by Covid-19, that Greece symbolically and literally streams an ancient drama performance from the holiest of places, to heal the wounds that were inflicted by the pandemic,” the organizers stated.
The play will be streamed live on July 25 at 21.00 Athens time (GMT +2), in partnership with Google Greece. It will be available worldwide (except in the nation of Greece), exclusively through YouTube, free of charge, but donations are welcome.
All proceeds will benefit the National Theatre and the Greek actors who have been impacted by the Covid-19 pandemic. Google will host the live streaming and provide technical support as well as a major free promotion across YouTube regarding the live-streamed event.
The play is in Greek with English subtitles and lasts approximately 90 minutes. It will be streamed through the portal livefromepidaurus.gr and will be also available at the websites of the National Theatre of Greece, the Athens and Epidaurus Festival and the Ministry of Culture and Sports, as well as the National Theatre of Greece’s YouTube channel.
To watch the event, simply click on the link for the website of the theatre of Epidaurus, here.
With information from AMNA