Government, Opposition Clash over Bill to Curb Demonstrations in Greece 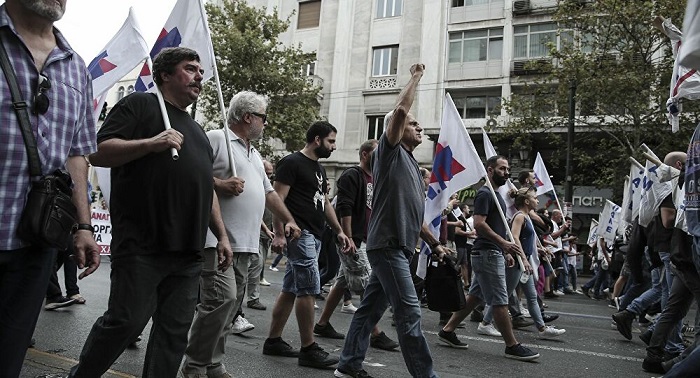 As the vote for the bill to regulate demonstrations is about to go up for a vote in the Greek Parliament Thursday, there continue to be fierce reactions from the opposition, unions and other sectors of society.
Greece’s public sector employees union ADEDY walked off their jobs on Wednesday, protesting the bill on public demonstrations by accusing the government of using a 1971 junta decree which restricted the right of assembly.
The Greek Communist Party workers Union PAME, along with other leftist unions, are also organizing demonstrations in the center of Athens to take place on Thursday evening.
Government argues in favor of regulation of demonstrations
Speaking in Parliament on Thursday, Prime Minister Kyriakos Mitsotakis said that the bill “protects the citizens’ freedom of public expression; it protects it from both state authoritarianism and from the threat that this right will be usurped by those who oppose normalcy.”
PM Mitsotakis emphasized that the right to public assembly was fully protected and has been recognized by the constitution for a century and a half. The bill, he said, simply establishes rules for rallies and demonstrations “in such a way that it does not obstruct the movement and work of citizens and the life of an entire city.”
The proposed restrictions stipulate that there should be a person responsible for organizing the rally, organizers are held responsible for harm or damages incurred, and that the police have the right to refuse permission if they deem that the demonstration would be disruptive or threaten public safety.
It also states that smaller demonstrations should not close main city streets but stay only on the sidewalks or occupy only certain lanes on main streets so that traffic will not be disrupted.
Citizen Protection Minister Michalis Chrysohoidis said that the right to assemble and the right to protest are often abused and lead to illegal acts, including violent attacks against police, destruction of public and private property and vandalism.
At the same time, the frequent street demonstrations in the center of Athens and other cities damage the economic activities of businesses while causing traffic chaos as well. He mentioned, however, that major rallies such as the May Day march will not be affected.
“From May to June 2020, 119 street demonstrations took place. About two each day,” Chrysohoidis noted. “About 87 percent of demonstrations, almost nine out of 10, had less than 500 participants. Half of them had less than fifty people.
“In almost all of them, 112 out of 119 the streets were closed and traffic was stopped. No one is happy with this situation,” he stated, adding that non-regulation of the exercise of the right to protest ultimately undermines the validity of that right.
“For reasons of Constitutional order, democratic legitimacy and principle, the regulation is ready (to become law),” Chrysohoidis said, going on to note that “The right to assemble without restrictions does not exist anywhere in the world.”
Fierce reactions from leftist opposition
The main opposition SYRIZA party attacked the government, saying that the bill looks as if it comes from the seven-year dictatorship era and aims at shutting down the voice of the people.
SYRIZA MP Yiannis Ragousis said in parliament that the new law will eventually have the opposite effect, and France’s “Yellow Vest” demonstrations will also appear in Greece.
“Not only are you criminalizing free participation in democratic rallies, but you also criminalize something deeper about democracy and its nature: You are criminalizing the free expression of citizens,” he said, underscoring that the people’s right to assemble and protest “is not subject to police licensing and precautionary restrictions.”
The positions of the Greek Communist Party (KKE) and DiEM 25 were along the same lines, both saying that they would vote against the bill.
KKE MP Thanasis Pafilis accused the government of trying to silence the voices of the people because “they feel that their profits and luxuries are threatened and called for “organized disobedience” so that the law will not be enforced.
DiEM25 leader Yanis Varoufakis wondered ironically: “How liberal is the New Democracy of Mr. Mitsotakis, when he does not even change the articles and the provisions of the junta law?”
The Movement for Change party agrees in principle with the regulation of demonstrations, with a few minor objections on certain articles. Right-wing Greek Solution party (Elliniki Lisi) is in favor of the bill and also asks for additional restrictions.
The Athens Bar Association’s position on the bill
The Athens Bar Association (DSA) issued a statement on the issue saying, inter alia, that “The Athens Bar Association considers of fundamental importance the protection of the right to assemble and to hold public meetings in the context of the protection of the individual and social rights of its citizens provided by Article 11 of the Constitution.
“The above right is not absolute. There is room for legitimate restrictions in accordance with paragraph 2 of Article 11 of the Constitution. In particular, open-air gatherings may be prohibited by substantiated decision of police authority only if they pose a serious risk to public safety, and, in certain areas where there is serious disturbance to the socio-economic life…”
The statement went on to say “The conflict of Constitutional rights on the one hand, the right to assemble and on the other hand; the right to participate in social and economic life, must be treated with in concreto weighting in accordance with the principles of practical harmonization and proportionality.”
The DSA also stated that it “disagrees with the establishment of objective liability, civil and criminal, of the organizer (Article 13 of the draft bill), as it is clearly contrary to the principle of guilt and censure.”