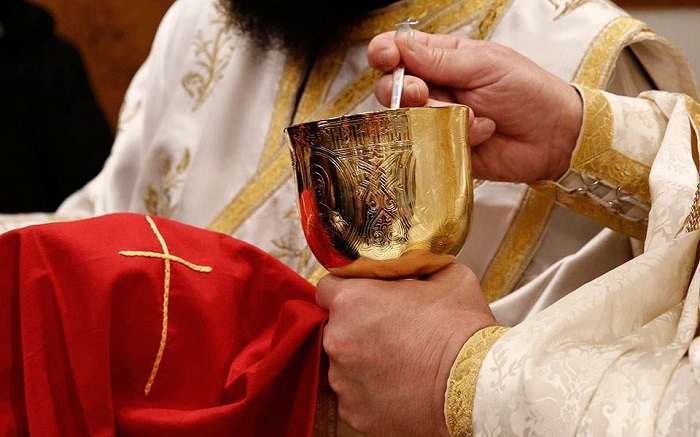 Thousands of Orthodox faithful flocked to churches on Sunday following their opening after two months of lockdown because of the coronavirus threat.
Lines for Holy Communion, which is shared by the same spoon, stretched out the door as Orthodox Christians flocked to receive the sacrament from which they had been derived for some time.
Antidoro, or the small piece of sanctified bread that is given to faithful at the end of services, was passed out wrapped in plastic bags.
The act of Communion in the Eastern Orthodox Church involves priests placing bread into a wine-filled chalice. The bread and the wine are believed by the faithful to become the body and blood of Christ, as He said at the Last Supper.
As the bread soaks in the wine, the priests use the same spoon to put a piece of the bread into the mouth of each believer. At the end, the priest drinks whatever wine is left in the chalice.
Unlike the Greek Orthodox church, the act of Communion in Catholic Italy has changed to adapt to the coronavirus era. The hosts are now to be placed in communicants’ hands, not directly in their mouths, as has been done in more traditional parishes in the past.
In a statement issued on Sunday, Pope Francis asked the faithful to follow the new regulations, “in order to protect each other’s health and the health of the people.”
In March, when the Greek authorities announced the the first restrictive measures to combat the spread of the coronavirus, the traditional act of Communion came into focus. Most scientists warned that the practice of sharing a common spoon may spread the virus.
The Holy Synod of the Orthodox Church of Greece, however, had rejected this scientific advice. ”For the members of the Church, attending the Holy Eucharist … certainly cannot be a cause of disease transmission,” the Holy Synod declared in its statement.
”Faithful of all ages know that coming to receive Holy Communion, even in the midst of a pandemic, is both a practical affirmation of self-surrender to the Living God, and an apparent manifestation of love,” the Greek Orthodox Church averred.
The German government, however, has now decided to ban Holy Communion in the form it is given to Orthodox Christians there in fear that it is conducive to the spread of coronavirus and endangers public health.
Related: Holy Communion in the Τimes of Coronavirus