Priest and Parishioner Detained on Chios for Violating Coronavirus Restrictions 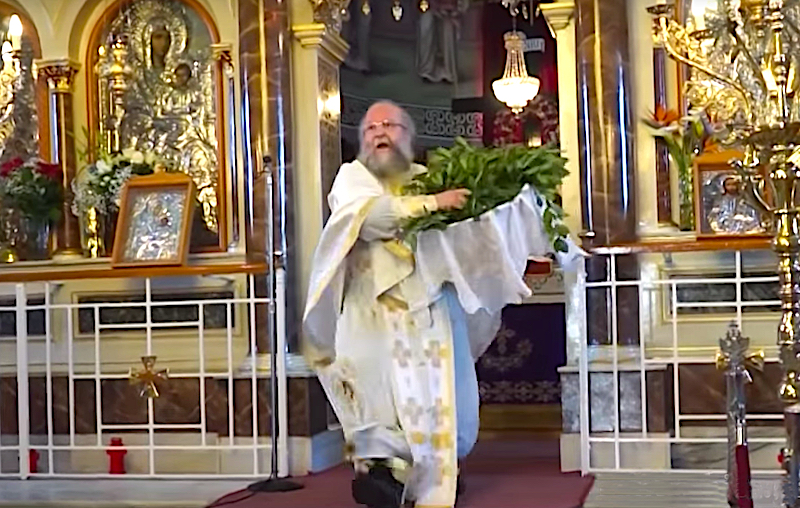 A Greek Orthodox priest and a woman who wanted to attend church services were detained on Holy Saturday on the Greek island of Chios, both accused of failing to abide by the restrictions imposed due to the coronavirus pandemic.
Father Christophoros, who had become famous in the past for the very joyful and theatrical way in which he conducts the Holy Saturday morning liturgy, was detained by local police on Chios for conducting the service with the gates of the church wide open.
The incident took place at the Panagia Evangelistria shrine on Chios island.
According to the restrictive measures imposed by the Greek state, all churches should conduct their liturgies behind closed doors, with no members of the public attending whatsoever.
In addition to this, a woman attempted to enter the church where Father Christophoros was conducting the liturgy. However, men from the local police department of the island prohibited her entry.
This sparked a violent reaction on behalf of the woman, who even tried to assault one of the police officers.
Greece, along with the rest of the Orthodox Christian world, celebrates Easter on Sunday, in the midst of an unprecedented situation, with the entire population in isolation at home.

Famous for his lively Holy Saturday service, this priest from Chios island exclaims the first message of resurrection to a near-empty church due to the pandemic. Later the priest and a parishioner are detained by the police for breaking the quarantine rules. Full story: https://bit.ly/3bnipjG