GRNews
GreekReporter.comGreeceChios Massacre: The Worst Atrocity Committed by the Ottomans Against Greeks

Chios Massacre: The Worst Atrocity Committed by the Ottomans Against Greeks

The Chios massacre of 1822 was perhaps the worst atrocity carried out by the Ottomans against Greeks during the War of Independence.
Approximately three-quarters of the population of 120,000 were killed, enslaved or died of disease after thousands of Turkish troops landed on the eastern Aegean island to put down a rebellion against the Ottoman rule.
Island of traders
For over 2,000 years, Chios merchants and shipowners had been prominent in trade and diplomacy throughout the Black Sea, the Aegean, and the Mediterranean.
The Ottoman Empire allowed Chios almost complete control over its own affairs as Chian trade and the very expensive and sought-after mastic plant, harvested only on Chios, were of great value to it. 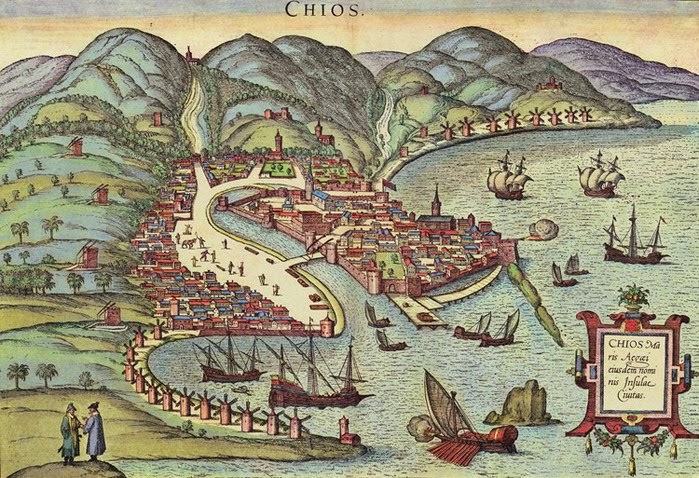 The cosmopolitan Chians were also very prominent in Constantinople, causing the island’s ruling classes to be reluctant to join the Greek revolt, fearing the loss of their security and prosperity. Furthermore, they were aware that they were situated far too close to the Turkish heartland in Anatolia to be safe.
Massacre
Things changed in March 1822 when several hundred armed Greeks from the neighboring island of Samos landed on Chios. They attacked the Turks, who retreated to the citadel. Many islanders then decided to join the revolution.
However, the vast majority of the population had, by all accounts, not joined other Greeks in their revolt against the Ottoman Empire and had done absolutely nothing to provoke the hideous reprisals.
The Turks sent reinforcements to Chios on March 22. On March 31, orders were given to burn down the town, and over the next four months, another estimated 40,000 Turkish troops arrived on the island.


In addition to setting fires, the troops were ordered to kill all infants under three years old, all males 12 years and older, and all females 40 and older, except those willing to convert to Islam.
Tens of thousands of survivors dispersed throughout Europe and became part of what became known as the Chian Diaspora.
Europe in shock
The massacre shocked Europe and protesters brought attention to the atrocity, with many famous artists dedicating works to this heinous event.
One of the greatest works of the great French painter Eugene Delacroix was a depiction of  the Massacre of Chios, showing all Europeans the horrors and atrocities the Turks were responsible for on the island.

Victor Hugo wrote a poem about the massacre as well, while voluntary organizations collected money to support the Greek Revolution with arms and weapons, and many Westerners came to Greece to fight against the Ottomans.
On June 6th, 1822, Konstantinos Kanaris, a native of Chios, finally retaliated. Kanaris, who had somehow survived the massacre, set ablaze a Turkish fleet which had landed in the port of Chios, killing 2,000 Turks and destroying all the ships in the port.