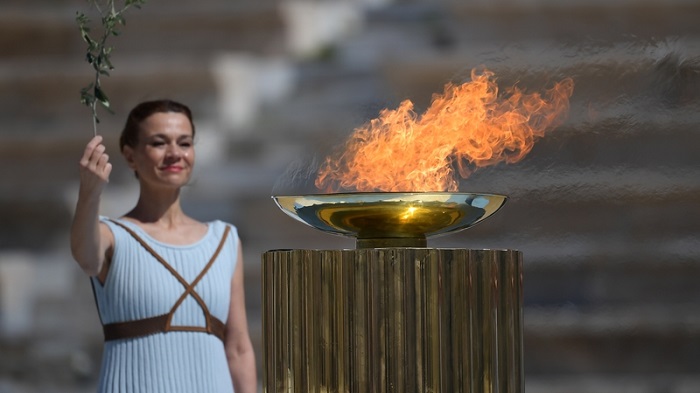 The Olympic flame handover ceremony for the Tokyo Games was held without spectators on Thursday in Athens in an effort to contain the coronavirus outbreak. This marks the first time in history that event has taken place without spectators.
The torch was received by Tokyo Games representative Naoko Imoto In a brief ceremony held at a completely empty Panathenaic stadium, the site of the first modern Games in 1896.
The flame will arrive in Japan on Friday and kick off a relay in that country on March 26.
Greek Olympic Committee chief Spyros Capralos handed over the lit torch to the former Japanese Olympic swimmer Imoto in front of empty stands inside the vast  horseshoe-shaped marble stadium, which holds 50,000.
The flame was then transferred into a small receptacle to travel to Japan aboard a special aircraft named “Tokyo 2020 Go.”
Only a few dozen officials were allowed into the central Athens stadium, since the country has imposed strict measures to contain the spread of the coronavirus.
Tokyo Games chief Yoshiro Mori said in a video message that he hoped the flame’s arrival would help “shake off the dark clouds hanging over the world.”