Coronavirus: Greece to Impose Controls on Supermarkets to Prevent Overcrowding 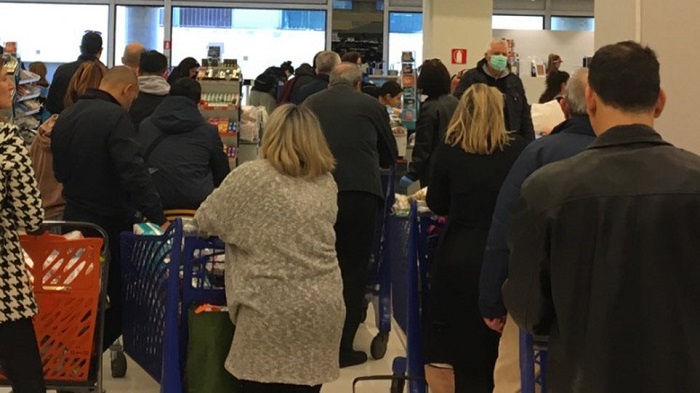 Greek authorities announced on Sunday that they will impose crowd controls on supermarkets starting Monday to prevent overcrowding and prevent the spread of coronavirus in the country.
Speaking to Open TV, Deputy Development Minister Nikos Papathanasis said that security guards will only allow a limited number of shoppers to each supermarket depending on it’s size.
He added that supermarkets will boost their delivery services, including on Sundays, to avoid overcrowding. He did not specify how this is to be done.
The new regulations specify the following:
· Supermarkets must oversee the entrances of the stores to avoid overcrowding.
· Consumers should be in proportion to one person per 10 square meters and with a minimum distance of two meters between them.
· Supermarkets can also operate on Sundays, but exclusively for home delivery of electronic orders, and can be refueled 24 hours a day.
· At the supermarket entrances there must be a compulsory disinfectant/antiseptic device for free use by consumers.
· All areas of the supermarket should be disinfected and ventilated at regular intervals.
Papathanasis had earlier posted on Twitter a video aimed to ease fears that supermarkets are running out of supplies. He vowed that supermarkets will never close and claimed that the situation returns to normality.

In Greece, there’s no panic in the supermarkets yet, but shoppers have nearly cleaned out some necessities such as anti-bacterial wipes and hand sanitizers, and toilet paper is being scooped up.
Health authorities on Saturday announced that two more people have died from coronavirus, bringing the total fatalities in the country to three. Total cases in the country have jumped to 228, with 38 new cases recorded on Saturday.