GRNews
GreekReporter.comGreeceThousands of Refugees Waiting to Cross Into Greece As Turkey Opens Borders

By Nick Kampouris
March 1, 2020
Facebook
Twitter
WhatsApp
Linkedin
Email
Thousands of refugees and migrants remain behind a wire fence on the Greek-Turkish border in Evros, hoping to cross to the Greek side of the border.
The country has been constantly strengthening its border with police and military forces from all over the country to deal with the unprecedented situation.
According to Greek Reporter‘s exclusive information, the situation on Sunday morning was calm, without any violent incident taking place. Greek national border patrol forces in Evros have been also told to be on alert, but up until now, their assistance has not been needed.
A total of 136 people were arrested on Friday and Saturday for crossing the border illegally by Greece’s forces.
The detainees reportedly entered illegally Greek territory beyond the customs line, where strong army and police forces have been deployed, creating an impenetrable wall.
Greek police and military forces had to deal with constant throwings of rocks, chunks of wood and petrol bombs from the Turkish side of the border. For this reason, the Greek police responded with tear gas to deter the crowds.
EU Reaction
EU’s leadership has rushed to — verbally — support Greece in this situation, pledging material help.

Our top priority at this stage is to ensure that Greece and Bulgaria have our full support. We stand ready to provide additional support including through #Frontex on the land border. (2/2)

The President of the European Commission Ursula von der Leyen said that the EU has been closely following the situation and thus its first priority is to assist Greece and Bulgaria by sending additional FRONTEX guards.
The President of the European Council Charles Michel said that he is in close contact with the Greek and the Bulgarian PMs.
10,000 People Pushed Back By Greece


Greece’s Deputy Defense Minister Alcibiades Stefanis said that Greece has dealt with approximately 9,600 illegal attempts of violation of its borders so far.
Stefanis noted that it is impossible for all these thousands of people to have come from Idlib in Syria, making a direct inference that these people could have been brought there by Turkey.
However, some individuals have managed to cross the border without being spotted by Greek forces, and are now trying to find a way to get to Thessaloniki or Athens.
At the same time, Greek government sources were quoted by Greece’s Kathimerini newspaper as having said that in 24 hours, Greece deterred 9,972 people from entering the country’s territory.
Throughout Saturday night, the Greek military continued putting up obstacles and signs warning the refugees and migrants not to cross the border.
At Least 220 New Arrivals on Lesvos
Meanwhile, the number of sea arrivals on Lesvos are rising, since at least 220 individuals arrived on the island on Saturday.
The dinghies arrived on eastern and northern shores of Lesvos, while four additional incidents are reported as taking place on Sunday morning.

Dozens of journalists and media crew have gathered on the Greek side of the border, in the border village of Kastanies, where they are attempting to cover the latest developments. According to information gathered by Greek Reporter, Greek Defense Minister Nikos Panagiotopoulos will be in Kastanies on Sunday and will brief media correspondents about the situation at the border. 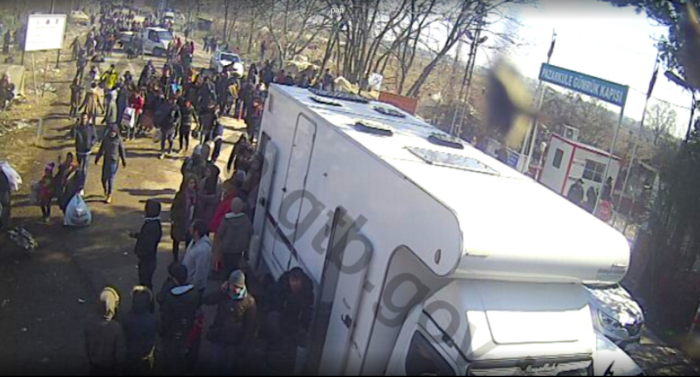 Meanwhile, vans and trucks have been seen on the Turkish side of the border, approximately 150 meters from the fence. CCTV cameras show refugees and migrants heading there, picking up bags, which are most likely boxes of food.