Olympiacos Triumphs Against Arsenal in Historic Night For Greek Football 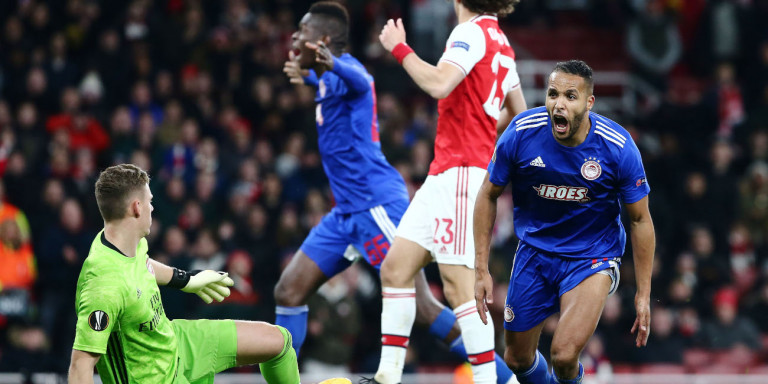 Olympiacos celebrated one of its biggest achievements in its history by overturning a 1-0 defeat by Arsenal at Piraeus to win 2-1 in London on Thursday and secure a place in the last 16 of the Europa Cup.
Youseff El Arabi scored in the last minute of extra time to silence the home crowd at the Emirates Stadium in what was perhaps one of the best performances of the Greek club in Europe.
Papa Abou Cisse headed Olympiacos in front just after half-time from a corner to set up a tense Round of 32 second leg clash, but Pierre-Emerick Aubameyang levelled matters in the first half of extra time with a stunning bicycle kick.
But Pedro Martins’ side, who produced a memorable and gutsy display, never gave up and were rewarded in the last minute of extra time when El Arabi pounced to score what proved to be the decisive goal.
“It’s a historic night for Olympiacos,” beamed Olympiacos boss Pedro Martins. “We deserved this qualification, not only for these two games against Arsenal but also for our spirited performances in Europe throughout the season regardless of the results. We were determined, we believed we could qualify and we made it.”

A seven-year-old boy died after a fire broke out at a migrant camp in Thebes, northwest of Athens, late on Tuesday. The child's nationality was not released.