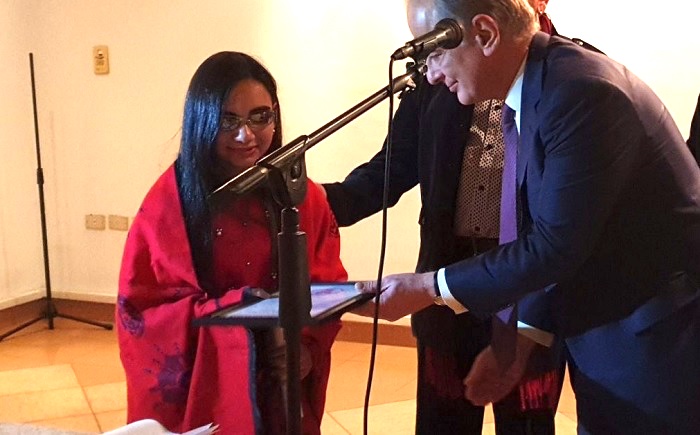 Using her determination and deep love of the Greek language and culture, a young, blind Egyptian girl was awarded a certificate of excellence in Greek at a ceremony held at the Greek Cultural Center of Cairo on Friday.

Twenty year-old Andy Elarabi moved the audience in her speech when, in perfect Greek, she said that it was “a dream come true receiving the award.”

“One day I would like to visit Greece and receive Greek citizenship along with the Egyptian,” she said.

Elarabi, who had to take all her examinations using the Braille system, earned a certificate which is equivalent to a Greek high school diploma.

Her teacher, Angeliki Skoubi, stood proudly next to her student and applauded enthusiastically when the certificate was awarded to her student. Greek Ambassador to Egypt Nikos Garilidis was also among the dozens of guests at the Greek Cultural Center.

Elarabi fell in love with Greece beginning at a young age when she would listen to the Greek-language program on Egyptian public radio. This inspired her great love for the country, as she learned about it all through sound, including news bulletins, songs and the descriptions of broadcasters.

She is in the Classical Studies program at the University of Cairo, where she is now in her third and final year in the Modern Greek Studies program.