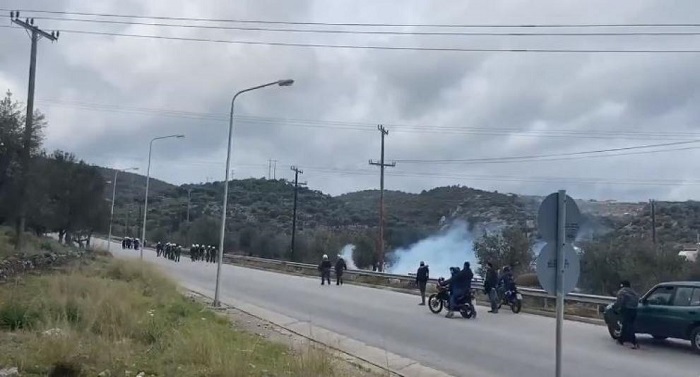 Police on the eastern Aegean island of Lesvos used tear gas to disperse a march by asylum seekers and migrants from the infamous Moria camp and stop them from reaching the capital of Mytilini on Monday.
Police clashed with some 1,000 protesters, who were trying to break through a cordon set up on the main road leading from Moria to Mytilini. Many protesters were marching along with their entire families.
Some of the protesters also set fires in an area close to the Public Power Corporation (PPC) power plant, while another group managed to reach the town and occupied the central road going to the harbor, setting up tents in front of Mytilini’s municipal theater.
The march, which started at around 10:30 AM on Monday, was organized to protest the appalling living conditions at the state-run camp, which is housing many times the population that it was built to accommodate.

The police keep throwing tear gas. They are trying to push them back to Moría. pic.twitter.com/ZKpftnK1Kb

People breaking through olive grove fields close to Moria, after police blocked them from going to the port town of Mytilini to protest. Heavy use of tear gas, among the protesters many families. #Live pic.twitter.com/haYzgF9mS6

The refugees and migrants are also angry at the slow pace of processing, which is keeping them trapped at the camp far beyond the time they had hoped to be housed there.

Later on Monday, Greece’s Immigration Minister Notis Mitarachi claimed that there is a possibility these demonstrations to have been provoked by others.
”The Greek authorities step protection measures and investigate possible incitement of such reactions,” Mitarachi said on Monday afternoon.
”Some may be upset, but let’s understand it: The policy has changed,” Mitarachi noted emphatically, referring to his government’s stance on the issue.
The minister also noted that ”Abusive behavior does not comply with the asylum procedure,” sending a message to those who violate public order.