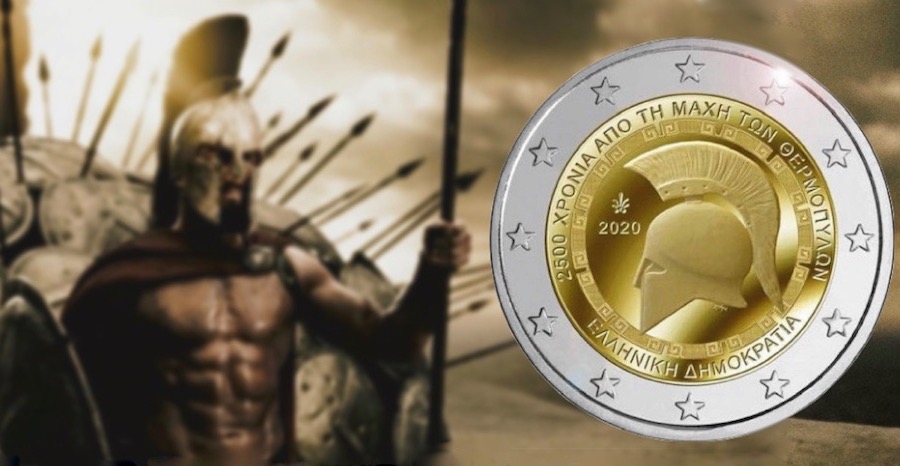 Greece will soon issue two commemorative coins to mark 2500 years since the historic battle of Thermopylae, fought in 480 BC.
Their official announcement took place recently in Berlin, during the event called the ”World Money Fair 2020,” which was held from January 31 until February 3.
One of the two commemorative coins, which will soon enter circulation across the Eurozone, has the value of €2.
The other one is a silver commemorative coin which can be bought by collectors. Not in general circulation, its nominal value will be €10. 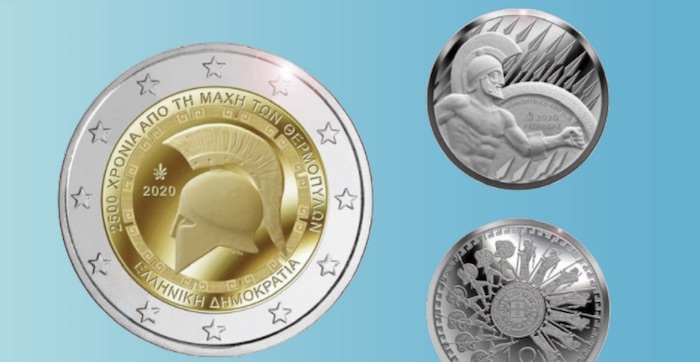 The two-euro coin will depict an ancient Greek helmet on the national side.
The words “2,500 years from the Battle of Thermopylae” are inscribed around the coin along with the words ”Hellenic Republic.”
The silver collector’s coin features a shielded Greek hoplite (soldier) on the front, and extended spears appear in the background.
On the arch, one can see the words “Thermopylae – 480 BC,” the year of the minting and the name “Leonidas.”
On the back of the coin, one can see a depiction of the ancient Greek warriors facing the invading Persians.
In the center are the words “2,500 years since the Battle of Thermopylae,” the coat of arms of Greece and the words “Hellenic Republic.”
Greece will also issue a commemorative coin celebrating the 2,500th anniversary of the Naval Battle of Salamis. Its nominal value will be €10 and collectors will soon be able to buy that as well.
The €2 commemorative coins, special euro coins which have been minted and issued by member states belonging to the Eurozone since 2004, can freely circulate all across the Eurozone.
Related: The Battle of Thermopylae: When the Greeks Fought to Defend Civilization

In 2020 Greece celebrates the 2500-year-anniversary of the Battle of Thermopylae, when King Leonidas and his men said "Molon Labe" and fought to death against one million Persians; protecting the foundations of our civilization in one of the most famous battles in history that shaped our world! Full story: https://bit.ly/2Ow8pKR