By Tasos Kokkinidis
January 10, 2020
Facebook
Twitter
WhatsApp
Linkedin
Email
Greek photographer Elias Chasiotis was the lucky man who was able to capture astonishing images in late December which appear to show giant red “devil’s horns” rising up out of the Persian Gulf during a solar eclipse.
The photos have gone completely viral around the world and have been republished in major international newspapers in the last several days.
While on holiday in Al Wakrah, Qatar, Chasiotis lay in wait in just the right spot on December 26 to snap the exceptionally rare spectacle as the sun was partially blocked by the moon at daybreak. 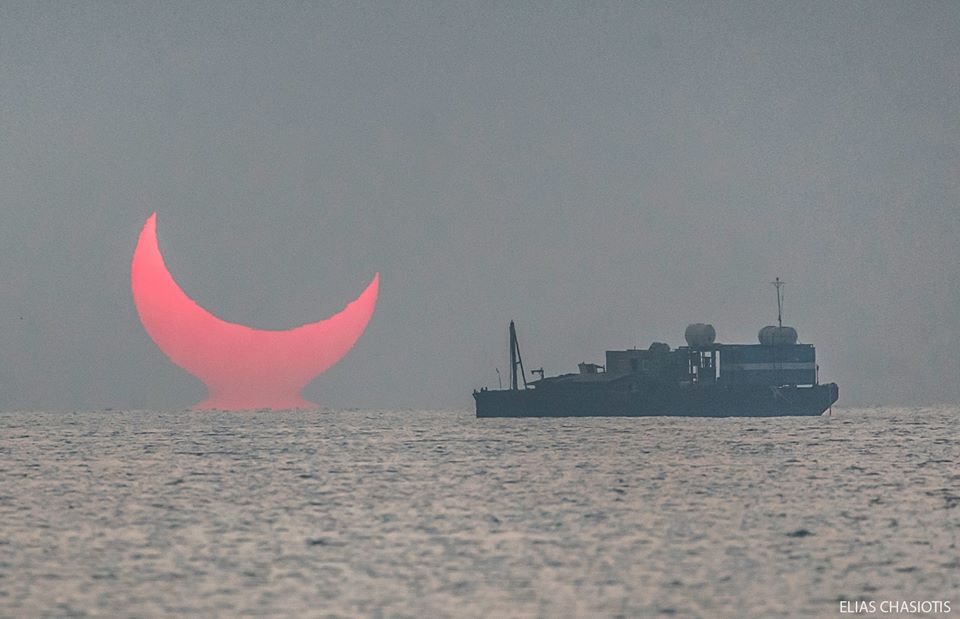 Chasiotis told interviewers from BoredPanda “I hoped that optical effects like inferior mirage would be visible and I was lucky enough to capture them.”
This type of mirage over the ocean actually has its own name, “Fata Morgana.” This is said to occur when rays of light are bent when they pass through layers of air which have different temperatures.
It is fantastically named after the sorceress of Arthurian legend, Morgan le Fay, because it was once believed that these mirages were fairy castles created by her witchcraft to lure sailors to their death.
Chasiotis explained to interviewers that “I was worried that nothing would come out of the eclipse. However, when the sun finally began to rise, it looked like two separate pieces, some sort of red horns piercing the sea.”

Some of my recent eclipse images, processed by the friend and professional photographer Iakovos Strikis