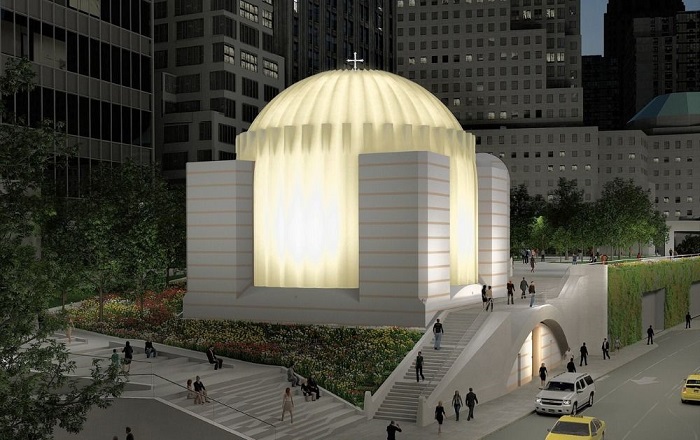 The long-stalled construction of the new St. Nicholas Greek Orthodox Church and National Shrine at the World Trade Center is back on track, Gov. Andrew Cuomo announced Thursday.

The announcement followed a meeting with Greek Orthodox Archbishop Elpidophoros of America. Construction shut down for two years after the Greek Orthodox Church ran out of money for the $80 million project, while top church executives were convicted or accused of pilfering church funds and the millions meant for the new facility for other projects.

“The rebuilding of St. Nicholas Church that was destroyed on September 11 is a moment of coming together and healing not only for the Greek Orthodox community but for all New Yorkers who lived through that horrific day,” Governor Cuomo said.

“This house of worship will serve as a reminder that our collective faith is something we can always count on to move past our painful memories and build a better tomorrow.”

Archbishop Elpidophoros replied, “On behalf of the Greek Orthodox Faithful, we have made a commitment to open the doors of this National Shrine by September 11, 2021, the twentieth anniversary of that fateful day. I pledge to you, Governor Cuomo, and to all the people of New York, that we will be ready; we will be on time; and we will be open to all women and men of good will who wish to honor the memory of all who perished on September eleventh.”

The project will be driven by a new non-profit organization with an independent, 13-member board called “The Friends of St. Nicholas.” The new entity has been formed to ensure that the sacred space is completed as expeditiously as possible and can begin welcoming visitors from around the world.

The 13-member board will be chaired by Dennis Mehiel, former Chairman of the Battery Park City Authority (2012-2018), and the Chairman of US Corrugated, which he founded in 1966. Richard Browne, Managing Partner of Sterling Project Development Group, will serve as COO of construction.

His Eminence Archbishop Elpidophoros of America will serve as the Honorary Chairman on behalf of the Greek Orthodox Archdiocese of America.

Countries with Names Deriving from the Greek Language