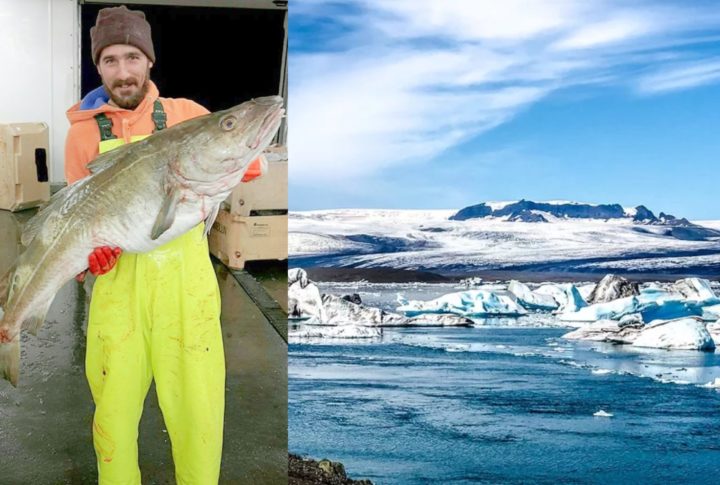 George Alevras is a Greek fisherman from the historic city of Messolonghi who currently lives in Siglufjörður, one of the northernmost cities in Iceland.
Despite his success in Iceland’s largest economic sector, Alevras would like to return back home to his native Greece.
He and his wife Kyriaki Sarigiannidou decided to move to Iceland three and a half years ago because George wanted to practice his profession in a country which seemed to offer more opportunity than crisis-hit Greece could at the time.
Speaking to Greek Reporter, Alevras explains, however, that living in Iceland is not easy, especially in the winter.
”We were shut in the house for days,” he says, remembering their recent ordeal after the island was battered by one of its worst snowstorms in years.
When asked about the reasons why he left his native land, Alevras was frank and expressed more than a little disappointment in the working environment of his home country.
”There are no controls in Greece,” he says bluntly. ”A fisherman might catch 150 kilograms of fish and he will only declare that he caught fifty. No one is there to inspect and check you.”
This has led to a situation where the seas which helped make life in Greece possible are now over-fished and the future seems rather cloudy for one of the country’s most ancient industries.
Greece might historically have been one of the largest fishing powers of Europe, but the country shows a profound lack of discipline, adherence to rules and organizational skills, all of which are crucial to the self-governance of this sector.

As it might go without saying, the situation is completely different in Iceland.
”Iceland had its own financial crisis in 2008, but in five years time they were back on their feet; they are systematic, they know how to take advantage of their comparative assets,” Alevras said.
”Here, no one even dares to think of saying the wrong number of kilograms” while recording the catch for the day, he explains.
”The very moment we reach the port after fishing, the country’s authorities will be there to inspect your boat. They will check everything, even if you caught a smaller fish which you weren’t allowed to,” the fisherman explains, with the usual surprise a Greek shows at such disciplined nations.
Icelandic fishermen’s boats are also equipped with satellite-tracking systems, so the authorities know exactly where they are fishing at each and every moment of the day.
”Greek boats can also have this, but most fishermen there do not want to, since this could limit their places of possible fishing,” Alevras notes.
”This means that the authorities are able to see if you fished in forbidden areas, so no one would want that in Greece,” he adds.
However, despite all the advantages of a fisherman’s life in Iceland and the astoundingly organized system under which it works, Alevras does want to go back home to his beautiful native land.
He explains the exquisite dilemma of the expatriate, saying ”I make a lot of money here, yet somehow I feel something is missing. I want to go back to Greece; I don’t want my child, who is going to be born in a few months, to be brought up as a foreigner.”
The fisherman’s ultimate goal is one day to return to Greece with his family, where he would like to continue practicing his profession.
”I have been talking to MPs and ministers both from the previous government of SYRIZA and of the current administration of the New Democracy party,” Alevras told interviewers from the Greek Reporter.
”I have been trying to explain to them that young people like me need incentives to come back,” he noted, adding that those who left the country during the years of the financial crisis need programs funded by the state and the EU to return and practice the professions they left behind.

”However, nothing has happened yet. There are programs, mainly through ESPA,” he explains, ”but nothing is good enough to persuade someone who left to come back.”
ESPA is the Structural and Cohesion Fund of the EU, which offers subsidies to investment projects along the periphery of Europe.
Nonetheless, Alevras has not stopped trying to find a workable way to return to Greece and make an honest living there.
He keeps speaking to Greek authorities about his ideas to help the fishing industry in Greece, to adjust to new technologies and to create a supportive atmosphere which will allow young professionals like him to thrive.
And despite the poor results he has received in this arena up to this moment, Alevras remains an optimist.
”I will return to Greece. I hope the next New Year’s Eve will find me back home,” he says.
His dream now is not only to practice his ancient craft of fishing but to make Greece’s fishing life known to foreign tourists as well.
”Greece is very popular in Iceland. There is literally no Icelandic person who hasn’t been to Greece in the summer, and particularly to Crete,” Alevras said.
”I want to make them know the Greek way of fishing too, the fish we get to find, and the way we do it, as my dad taught me when I was a boy,” he says with pride.
Alevras wants to offer to tourists ”fishing tours” where a family of tourists can go aboard his boat with him, spend the day fishing out on the sea and then cook their own fish on the boat for dinner. While dining on their catch of the day they can enjoy a glass of wine and bask in the splendor of the Greek summer before returning back to port.
He incarnates what Greece now needs the most: Honesty, discipline and passion. A passion to rebuild an economy ravaged by ten years of recession, using better practices, based on merit and hard work.
We hope that Alevras’ desire to shake things up and bring a more rational and practical mentality to this ancient way of life will finally have an effect on Greek authorities and that they will eventually be able to modernize the country’s fishing industry.