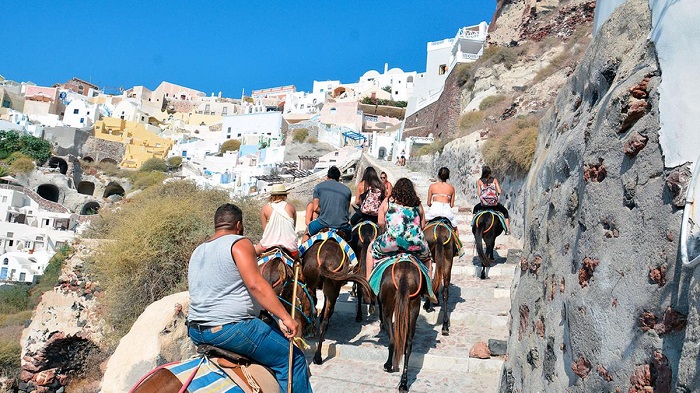 The Greek government has promised to tighten already-existing controls regarding the use of the donkeys for tourist rides on the island of Santorini following international criticism of their inhumane treatment.
Greek minister of Agriculture Makis Voridis replied to a letter by Athens-born musician Tommy Lee who last week called on Greece to officially cease the practice of using the animals as “taxi rides.”
“I’m honored to have been born in Athens, and wherever I tour with Mötley Crüe, I proudly proclaim my Greek heritage,” wrote Lee. “But there’s an issue souring the reputation of Greece that I hope you’ll help resolve: the sickening abuse of broken-down donkeys and mules made to lug tourists up steep hills on Santorini.”
In response, Voridis said that “The welfare of productive animals, working animals and generally all the animals of our country is a major concern for me personally and for our Ministry.”
“The aim of the Ministry in view of the forthcoming tourist season is to tighten the relevant controls throughout the Greek territory. In the event of violations of existing legislation by the audit authorities, the offenders will be subject to severe penalties. It is noted that the envisaged fine may be up to €30,000,” he adds.
The Greek official stressed that allegations of donkey mistreatment on Santorini are closely monitored. “We try to make sure to keep up-to-date on the latest scientific data and [EU] Commission guidelines aimed at preventing any kind of animal maltreatment and improving their welfare conditions.” he stated.
“In this way we believe that the traditional character of the local communities is maintained and strengthened, their economy is improved but the animals are also protected,” Voridis added.