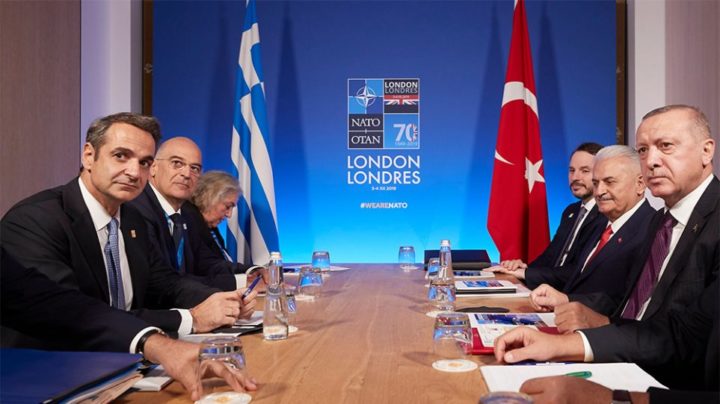 Greek Prime Minister Kyriakos Mitsotakis and Turkish President Recep Tayyip Erdogan along with their respective delegations met in London today in meetings held concurrently with the NATO summit held in the British capital.
Relations with Turkey may present difficulties, but Greece and Turkey can overcome their differences as long as they show goodwill, Mitsotakis said following the meeting.
“I raised all the issues emerging from the latest Turkish acts, and disagreements on either side were recorded,” he said of the meeting, which lasted an hour and a half.
“Nevertheless, both sides agreed to continue talks on the (Greek) National Defense ministry’s Confidence-Building Measures,” the premier underlined. He added that he had asked Foreign Affairs Minister Nikos Dendias, who was present, to convene the National Council on Foreign Policy and brief all parliamentary parties about the meeting.
“I would like to assure the Greek people that difficulties in our relationship with Turkey have always existed, still exist, and will exist. But I believe that as long as both sides show goodwill, these difficulties can be overcome,” Mitsotakis said.
According to sources quoted by the Athens-Macedonia News Agency (AMNA), the Greek premier clarified that the Turkey-Libya memorandum of understanding on maritime zones in the East Mediterranean is legally invalid and complicates things in a volatile region.

Apart from Premier Mitsotakis, the Greek delegation included Foreign Minister Nikos Dendias, Defense Minister Nikos Panagiotopoulos, the director of the Prime Minister’s diplomatic office Alexandra Papadopoulos, Greek national security adviser Alexandros Diakopoulos, and the director of the Prime Minister’s Press Office Dimitris Tsiordas.
The Turkish delegation included the country’s Foreign, Finance and Defense Ministers along with the former Premier of Turkey, Binali Yıldırım.
The meeting was delayed due to an unexpected dinner President Trump hosted for the leaders of the eight countries which pay more than two per cent of their GDP for their defense, one of which is Greece.
Prime Minister Mitsotakis apologized to President Erdogan for this delay.