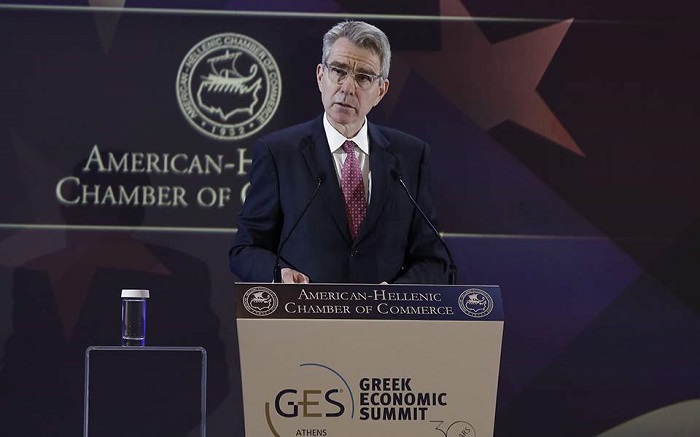 The new agreement between Turkey and Libya on maritime boundaries in the Mediterranean could threaten the stability that America has “sought to encourage,” US Ambassador to Greece Geoffrey Pyatt said on Tuesday.
Speaking to reporters after delivering a speech at the annual Greek Economic Summit in Athens, Pyatt said that while the US had not yet seen the text of the agreement, “we certainly see such a move as detracting from the situation of stability that the United States has sought to encourage.”
“We hope that as quickly as possible, the focus can return to building areas of cooperation based on international law, a point that Secretary of State [Mike] Pompeo made very clear in his remarks with the Foreign Minister, with the Prime Minister, when he was here in Athens,” the ambassador stated.
Pyatt said that the United States and Greece share a strong interest in seeing that Turkey remains anchored in the West and the NATO defense alliance, while commending the stance of the conservative government in Athens in the face of growing tension.
“We have consistently made clear our appreciation for the steps that Prime Minister Mitsotakis and his government have taken, literally from their first days in office, to help ensure that the channels of communication between Athens and Ankara are open and to make clear that Greece is not seeking escalation, is not seeking provocation,” the ambassador added.

Police have made over 30 arrests in Thessaloniki after they clashed with protesters who were demonstrating against a new education bill.
Greece