Greek PM: Those Challenging our Sovereign Rights will have to Face Greece and our European Allies 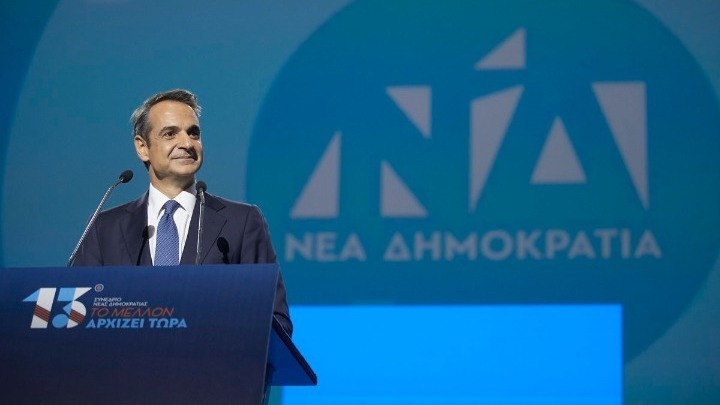 “Anyone rushing to doubt – by institutionally baseless means – Greece’s sovereign rights should know that they will have to face Greece and its European allies as well,” Greek Prime Minister Kyriakos Mitsotakis said on Friday.
In addressing New Democracy’s 13th congress, the party leader spoke, inter alia, about Turkey‘s expansionist moves in the Aegean and the Eastern Mediterranean. In particular, he was referring to this week’s agreement signed by Turkey and Libya on maritime boundaries.
The prime minister sent Ankara the message that Greece is an EU member state and if Turkey continues to challenge its territorial waters, it would be like challenging the European Union maritime boundaries.
Mitsotakis highlighted the importance of good neighborly relations and adherence to International Law, saying that these are the two compasses the government will follow in foreign policy.
In terms of the migration issue and the influx of asylum seekers coming to Greece from Turkey, the prime minister said that the country’s policy has changed, and now there is more staff to guard borders, new asylum regulations, and new, controlled reception centers for refugees.
Mitsotakis warned, however, that the migration and refugee issue is here to stay and that all Greeks “need to do our bit”, assuming “the burden the country bears is on a proportional basis,” he said, referring to fellow EU member states.

A good and old friend of Greece, the Puerto Rican artist Alexandra Echavarri released her first single entitled “Round and Round” recently.
Greek News

Impressed by the entrepreneurial environment in Greece, US giant Amazon announced that they will soon open their first office in Athens.
Culture