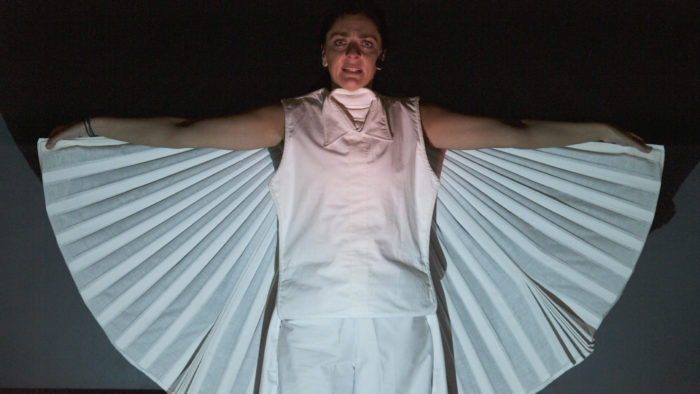 On Friday, October 19th, 2019, Yiorgios Vizyenos’ “My Mother’s Sin” was performed to a packed room of LMU students and community members.

The story was interpreted by Rena Kyprioti, an alumna of The Art Theatre of Karolos Koun, in a solo performance directed by Danae Roussou, who has collaborated with the Athens Concert Hall and the Epidavros Athens Festival.

The performance was presented under the auspices of the President of Greece, Prokopios Pavlopoulos and was supported by the Hellenic Republic Ministry of Foreign Affairs and the General Secretariat for Greeks Abroad.

The Director of the Caloyeras Center, Dr. Christina Bogdanou thanked the cast and director for their moving performance: ”The work of Vizyenos seems simple but is deeply layered and esoteric. It is an extraordinary achievement for a single performer, switching from character to character without pause, to convey such emotion about a mother’s enormous guilt and pain as well as her children’s eventual understanding and forgiveness. The brilliant costume, embodying all characters, the mesmerizing music and use of light, they all made this an almost mystical experience.”

The event was the inaugural event of the Zoe Caloyera Distinguished Lecture Fund. This signature series brings to the LMU campus outstanding individuals in the fields of art, culture, and science, relevant to the ongoing work of the Caloyeras Center for Modern Greek Studies.

It is made possible through the generous support and commitment of Nasreen Babu-Khan and Howard Lehrhoff to Hellenic Studies and the Southern California Greek-American community.

BCLA’s Dean Robbin Crabtree and Dr. Nasreen Babu-Khan welcomed the audience and spoke about the importance of the Center’s work over its 45 years history in the community and the need for support and cooperation among all Southern-California institutions and organizations dedicated to the promotion of Hellenism.

About the CALOYERAS CENTER FOR MODERN GREEK STUDIES at LMU

Every summer the Center organizes the Odyssey Program, a four-week travel and study program in Greece. The academic program takes place primarily on Spetses Island and is open to all LMU students.

The Center also sponsors and organizes lectures, readings, film screenings, concerts, symposia, and exhibitions on topics of interest to the university and the community at large.