GRNews
GreekReporter.comGreeceHopes for Compromise as Party Leaders Meet With PM Mitsotakis on Diaspora... 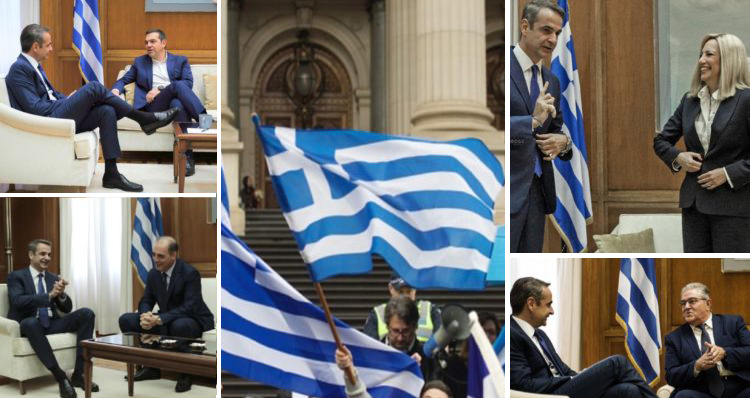 The series of meetings held by PM Mitsotakis with parliamentary party leaders concluded late in the afternoon on Friday, raising hopes that there could be a cross-party compromise on the crucial issue of the right for expats to vote in Greece’s general elections from their place of residence.
Following the meetings, the Greek government is optimistic that the bill will eventually gather more than 200 positive votes, even possibly up to 214, if every party votes for it other than SYRIZA.
In a statement issued after the meetings, the Government noted that ”Greeks residing abroad must be facilitated to exercise their fundamental constitutional right, as happens in all European countries. This opportunity should not go to waste.”
After meeting with Mitsotakis, ex-PM and leader of the Opposition Alexis Tsipras said that his SYRIZA party is in favor of granting Greek expats the right to vote by absentee ballot, provided that they elect only between 3-12 MPs, without their vote being counted in the total results of the election.
Tsipras opined that it would be a big mistake to include the Greek diaspora into national party politics and divide their communities abroad, at a time when Hellenism should be united in promoting the nation’s interests around the world.
He noted that the Greek diaspora has always played a crucial part in such promotion of Greek interests abroad.
Tsipras’ stance, however, remains miles away from what the Greek government intends to propose, as the New Democracy party would like the diaspora vote to count as normal to the overall result, as happens routinely in almost every other Western country.
Up until now, it has appeared that the 158 MPs of the ruling New Democracy party, along with the 22 MPs from the Social Democrat KINAL party, as well as the ten parliamentarians from the far-right Greek Solution party agree on most of the specifics of the proposed bill.
The legislation has not been published in an official, written form as of this time.
This would bring the total number of MPs in favor of the proposal to 190; however, this is not enough for the reform to be enacted immediately, since 200 MPs must vote in favor of the bill for it to take immediate effect.
For this reason, the stance of the 15 Communist MPs will be crucial in whether or not the reform receives the landslide majority that New democracy desires.
After his meeting with PM Mitsotakis, Secretary-General of the Communist Party of Greece Dimitris Koutsoumpas said that his party is in favor of the reform, provided that certain restrictions are in place.
Speaking to reporters, Koutsoumpas said that his party is open to the prospect of the Diaspora vote being counted in the overall result, but he asked for voting rights be granted only to Greeks who left the country in the last 30 years and can prove that they have family, property or economic interests in the country.
The Communist party leader also said that his party does not support the system of the postal vote; it prefers Greek citizens having to be physically present at the country’s embassies and consulates in order to cast their ballots.
Now all that remains is to see the official governmental proposal on the issue, in order to see whether it has come to a final cross-party compromise or if the bill will attract fewer votes than what many now expect.
This will all be made clearer in the coming days or weeks.