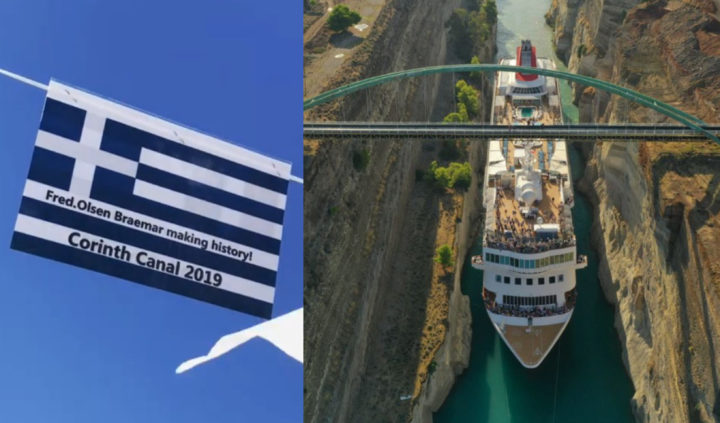 The largest ship to ever pass through the narrow Corinth Canal in southern Greece amazed both the fortunate passengers on board and spectators along the Canal on Wednesday morning.
The MS Braemar cruise ship, belonging to the UK-based Fred. Olsen Cruise Lines company, passed through Greece’s famed Corinth Canal, offering some beautiful and yet harrowing visuals, as it literally covered nearly the entire width of the famous Greek waterway.

Breathe in everyone! A fantastic photo from this morning, sailing through the #CorinthCanal #travel #Greece #cruise #fredolsencruiselines #cruising

Carrying more than 1,200 passengers and crew on board, the 196-meter (643-foot) long cruise ship was, as per regulations, assisted by a tugboat along its passage through the canal to avoid any unwelcome consequences.
The massive ship was so close to the edges of the canal that passengers could easily reach out their hands and touch trees on both sides of the waterway.

Envisioned since ancient times as a way to simplify trade and transportation, ground was first broken for the Canal by the Roman emperor Nero in 67 AD. However, a series of setbacks stopped construction multiple times over the centuries, and the waterway was not completed until 1893.
At four miles in length and a mere 70 feet wide, the Corinth Canal separates mainland Greece from the Peloponnesian Peninsula and connects the Corinthian and Saronic Gulfs.
Once an extraordinary feat of engineering and an important part of the infrastructure of Greece, the Canal is now more of a tourist attraction because of its narrow width, connecting some of the country’s popular holiday destinations.