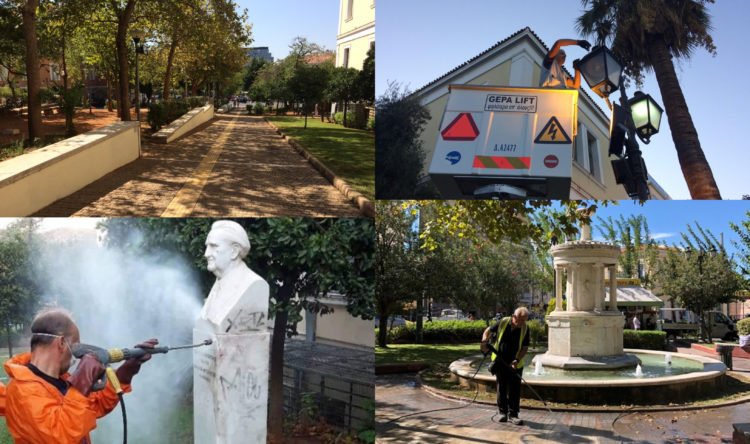 On Sunday, Athens municipal authorities continued their new campaign to clean up and beautify downtown Athens — perhaps most importantly, by removing the graffiti which has for so long been a visual blight on the Greek capital.
A team of workers from the City of Athens visited Sotiris Petroulas Square and other public spaces of Kolonos, downtown Athens, yesterday, diligently scrubbing surfaces with power washers and tidying up overgrown areas.
Costas Bakoyannis, the new mayor of Athens as of July, 2019, has pledged to change the face of his beloved city, making its downtown public spaces cleaner and more attractive to visitors and residents alike, and making much-needed aesthetic upgrades throughout.

This past weekend, Kolonos was the most recent neighborhood to see its public spaces get a thorough cleaning, its fountains scrubbed and graffiti finally blasted away from buildings and statues.
Anyone who has visited downtown Athens during the last decade has seen how serious the problem of vandalism and graffiti has become.
There are places in the Greek capital where no empty wall or surface has been left without being painted with graffiti, primarily by teenagers, who have marred nearly surface they could reach with ugly slogans and figures.
Years of neglect by local authorities and the generalized mentality of abandonment which has prevailed in large Greek cities in recent years have left an impression of decay and aesthetic ruin, which leaves residents and visitors to Athens with a very negative impression of the capital.
Earlier this weekend, City of Athens cleaners scrubbed down the statue of US President Harry Truman in the city center after it had been vandalized by far-left union members who had splashed red paint on it.
Other Athens sites which have been visited by the cleaning teams from the municipality were Metaxourgeio, Parko Eleftherias and the neighborhood near Athens’ Law School.
Our hope is that this effort will only intensify, and those responsible for vandalizing public property will finally be brought to justice and pay for the damages they have incurred.
At the very least, an atmosphere of cleanliness and order may finally be able to reign again  in this great city, allowing visitors and residents alike to be able to not only feel safe, but to appreciate its unique beauty.