The Story Behind the Historic Tositseo Building Evacuated by Athens Police 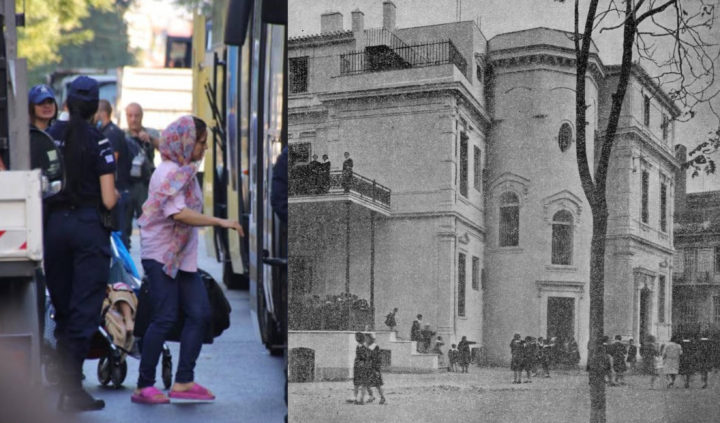 A large police operation took place in downtown Athens on Thursday morning in order to clear out a historic building in which illegal immigrants have squatted in since 2016.
Police drones, trucks, and vans, along with MAT riot police and a score of police officers sealed the streets in the Acharnes neighborhood in order to safely transfer the migrant families who resided in the building.
But not so long ago, the building they had lived in was once one of Athens’ most prestigious homes.
The building’s history
Designed by the famous Saxon, and later Greek, architect Ernst Ziller in the late 1800s, this neo-classical building was initially the home of the wealthy Argyropoulos family.
Among Athens’ true architectural gems, the house of the Argyropoulos family was a perfect example of Ziller‘s vision to make Athens a beautiful but not ostentatious capital, worthy of its glorious past — but in accordance with the ancient Greek spirit of modesty.
The Tositseio School
In 1935, Sophia and Alexandros Argyropoulos, who were the descendants of the original owners of the house, decided to sell it to Greece’s Educational Society (Philekpaedeutiki Etaeria), which operated some of Athens’ most historic and prestigious schools.


The Philekpaedeutiki Etaeria decided to transfer some of its students to this building, which was then named the ”Tositseio School,” in honor of Eleni Tositsa, the woman who sponsored the construction of the first school belonging to the Society.
In the autumn of 1937, the building began its long history as a school for female students (at the time, mixed-gender schools did not exist in Greece).
Apart from a short break during World War II, when the school was requisitioned in order to be used as a fire station, Ziller’s building operated as the Tositseio School until 1972.

During these decades, thousands of young Athenian girls studied in the school, which had one of the highest academic standards in the country.
This was a time when downtown Athens was the vibrant center of the city, where high-society and prominent Athenians worked and lived; a situation which is sadly completely opposite from the present, in which a dramatic degrading of the capital’s historic center is the reality.
The public school
In 1969, the Educational Society decided to build a massive school complex in the northern suburb of Ekali, in what is now Athens’ most expensive suburb.
The Tositseio School was officially transferred to Ekali in 1972, and its former building in downtown Athens was acquired by the Greek state to be used as a public school.
A public school operated in that building until 2014, when it was decided that the school be moved again due to a variety of reasons, among which was the size of the building itself.
The neighborhood was busy, and the building was just too small to accommodate such a large number of students.
Unfortunate period of decay
Following the fate of the broader historic center of Athens, the building was then sadly left to its fate.
Sitting empty, and vandalized repeatedly, it became an easy target for those who move from place to place as squatters, living in unused buildings in the Greek capital.

From 2016 until this very morning, the historic building had served as a home to refugees and illegal immigrants, mainly women with their children.
One of the pre-electoral pledges of the current conservative government was that the state will clear all of Athens’ illegally-occupied buildings, one of which is the once-elegant Ziller building in Acharnes.
A majority of the public seems to agree with this law-and-order approach of the new Greek government, since years of neglect in Athens’ city center has given an impression to Athenians that their city has surrendered to its decay.
However, some others are suspicious of the government’s approach.
Knowing the inability of the modern Greek state to quickly create a plan that will see this building obtain a new role, many believe that such buildings are better used as refuges for illegal immigrant families, rather than sitting empty and unused.
After Thursday’s police action, the Greek government has a unique chance to prove these people wrong by announcing its plans for the restoration of this historic structure; but will it?
Only time will tell.