A book which recounts the years Australian writers Charmian Clift and George Johnston spent on the Greek Island of Hydra has been shortlisted in this year’s Prime Minister’s Literary Awards. 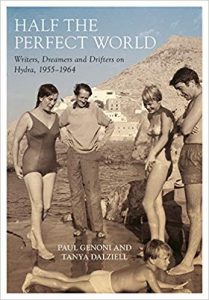 “Half the Perfect World,” by Paul Genoni and Tanya Dalziell, chronicles the times that the artists, writers and musicians – including Leonard Cohen – spent together on the Aegean island in the late ’50s and early ’60s.

Speaking to the Sydney Morning Herald, Genoni said Clift and Johnston were already prominent Australian writers at the time that they became the first foreigners to buy a house on the island, before other creative people followed in their footsteps.

“Leonard Cohen lived there as well, before he was famous, and that was another attractive part of the story,” the author adds.

Drawing on many previously-unseen letters, manuscripts and diaries of these creative individuals, and richly illustrated by the eyewitness photographs of LIFE magazine photojournalist James Burke, “Half the Perfect World” reveals the fascinating private lives and relationships of the Hydra expatriates.

The book charts the promise of a creative life that drew many of them to the island, and documents the unfortunate, and perhaps inevitable, fracturing of the community, as it came under pressure from personal ambitions at a time of great social change.

“Half the Perfect World” has been optioned for a film by Cascade Films.