GRNews
GreekReporter.comGreeceAfter 45 Years, Anniversary of Founding of PASOK More a Memorial than...

After 45 Years, Anniversary of Founding of PASOK More a Memorial than a Celebration 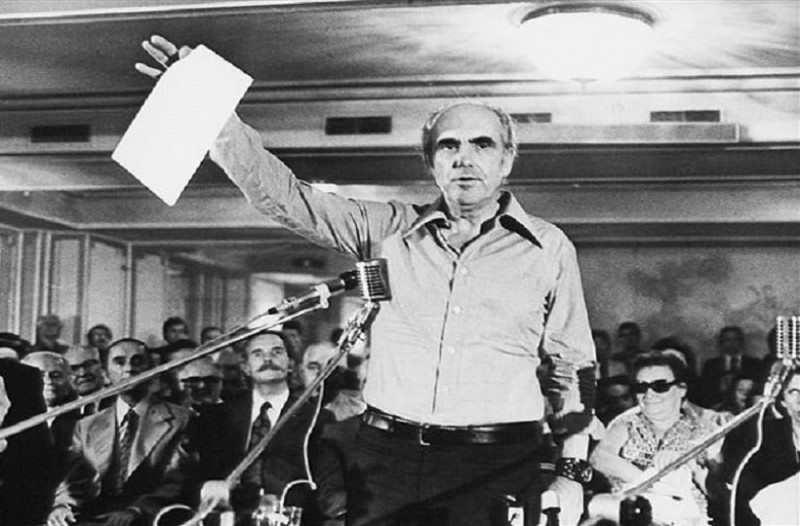 Ever since the 1980s, September 3rd has been celebrated by many Greeks as the day the Panhellenic Socialist Movement (PASOK) was established by the charismatic Andreas Papandreou, one of the emblematic political figures of post-war Greece.
Shortly after the fall of the seven-year-long dictatorship in July of 1974, the exiled Papandreou returned to Greece carrying with him substantial political clout. The son of beloved former prime minister Georgios Papandreou, he forged his own political career as a parliamentary member with the Center Union, the party his father had formed in 1961.
The leftist party founder had cleverly chosen September 3rd, 1974 to inaugurate the new socialist party. It was on that date in 1843 that the Hellenic Army and the Greek people had revolted against King Otto, demanding a change from an absolute monarchy to a constitutional monarchy — and the uprising succeeded.
Many believed at the time that Papandreou would restart his father’s party, but Andreas had other plans. He wanted to form a party which would cater to the underprivileged, the “people,” the ordinary workers across the nation of Greece.
The younger Panadreaou promised national independence, the democratic rule of the people and social liberation after decades of strict conservatism.
Using the symbol of the green sun, and naming his political vehicle a “movement” instead of a party, meant that he wanted to change Greek politics from the ground up.
On September 3, at King’s Palace Hotel in Athens, 150 people who formed the core of the Panhellenic Socialist Movement, declared the establishment of the new party. Papandreou read PASOK’s entire “Declaration of Principles” and then distributed a small green booklet with the party’s principles to the attending members of the press.
Papandreou had emphasized that “the main goal of the movement is to create a state free of foreign control or interference, and free from the control or influence of the economic oligarchy.” 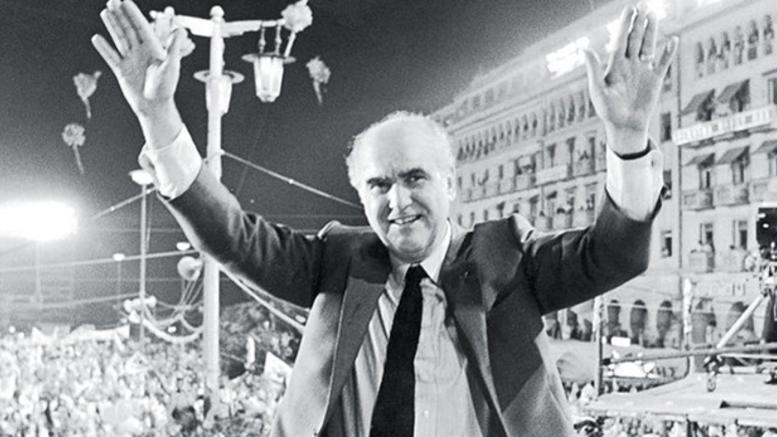 After serving for seven years as the main opposition, PASOK won the national elections in October of 1981 and became the first socialist government in Greece.
Papandreou became the very face of social democracy in Greece, and within years PASOK had developed such deep roots in Greek society that his successors expended a great deal of effort to even come close to his popularity.
However, although Papandreou won the 1981 elections based on a socialist agenda which was anti-European Union and anti-NATO, he never was able to fulfill his promises to pull Greece out of the EU or NATO.
He promised many things regarding Greece’s foreign affairs and relations with Europe and the superpower of the US — yet he was never able make any of his vows a reality. In that sense, Papandreou was the first populist prime minister, years before the term was used widely.
For example, the “anti-EU” Papandreou gladly used plentiful EU funds to raise public sector wages and pensions, and to hire many thousands of state employees — even where they were not needed — eventually creating a state with a labyrinthine bureaucracy.
Papandreou ruled from 1981-1989 and again from 1993 until his death in 1996. PASOK remained in power from 1996 until 2004, with Costas Simitis at the helm. During those years, the Greek economy was in good shape and the middle class underwent an impressive expansion.

Yet by the end of the 1980s, many ministers and MPs for PASOK, Papandreou included, became involved in huge financial scandals, and this inevitably tarnished their socialist reputation and their pretense that they were only “for the people.”
This dissatisfaction ended up sweeping the New Democracy Party into power, where they remained for almost four years.
Ironically, the man who is responsible for placing Greece into the European common currency bloc in 2001 was PASOK Prime Minister Kostas Simitis. It was equally ironic that George Papandreou, Andreas’ son, led Greece to the austerity bailout deal with the IMF in 2010, during his brief stint as Prime Minister from the end of 2009 until 2011.
For many Greeks, George Papandreou was viewed as a traitor who surrendered the sovereignty of Greece to its international creditors.
PASOK earned just a little over 13 percent of the vote in the 2012 elections, leading party leader Evangelos Venizelos to do something that until then had been considered taboo: He entered into a coalition with the archrival New Democracy Party, under Antonis Samaras as prime minister.
That marked the end for PASOK for all intents and purposes. In the European parliamentary elections of 2014, PASOK only ran as part of a coalition with other minor parties. In the January, 2015 national elections, PASOK was back on the ballot, but this time the party only garnered a paltry 4.68 percent of the vote, its lowest result ever.
After many meetings, conferences, conventions and several name changes, on March 16, 2018 the party eventually received a new name under Fofi Gennimata, the daughter of PASOK founding member and former minister, Giorgos Gennimatas.
“Movement for Change” became the new moniker for the PASOK party at that time.
The renamed, once mighty, party attracted eight percent of the total vote in the Greek national elections of July 7, 2019. It is very unlikely that the group will ever recapture its former glory, simply because times have changed and Papandreou’s rhetoric is a thing of the past.
The petition written up by former PASOK MPs – those who did not defect to Syriza – to bring back the PASOK brand name is based mainly on nostalgia rather than realistic options for empowering the party. Many Greeks do feel some nostalgia for PASOK because they associate the years of PASOK rule with the prosperity they enjoyed at that time.
So today,  we see that Fofi Gennimata has decided to hold a 45th anniversary celebration in Larissa. Small party, small city, an older, embittered PASOK follower might say. And one wonders, if the party leader changed the name of the party itself, why celebrate the day that PASOK was founded?
Given the party’s performance at the ballot box during the years of the financial crisis and the general indifference to the anniversary celebration, this year’s affair in Larissa looks more like a memorial service for a party that faded away some time ago.