More
GreekReporter.com Greece Explore the Elegant Island of Spetses, So Close and Yet So Far...

Explore the Elegant Island of Spetses, So Close and Yet So Far From Athens 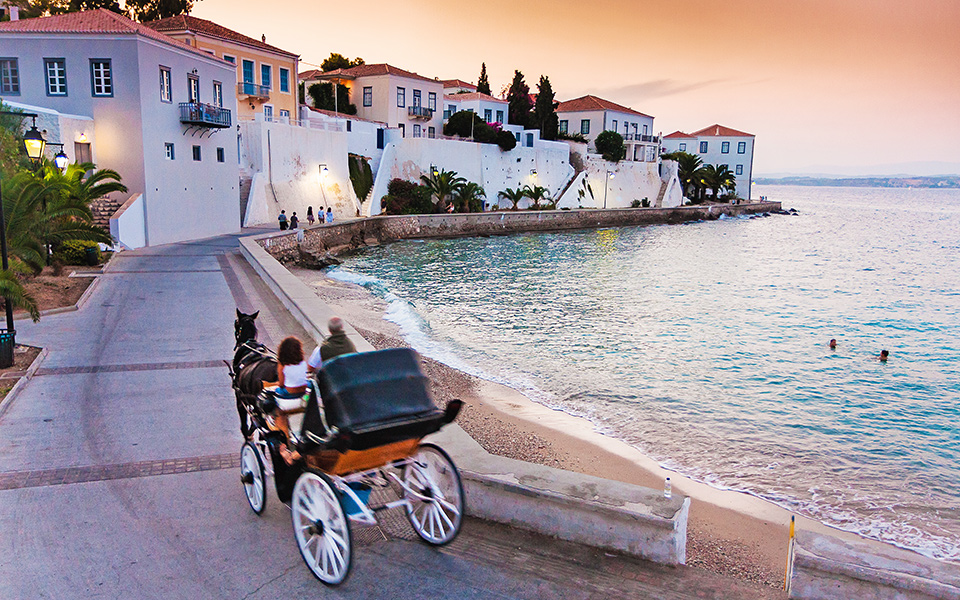 Just a two-hour ferry ride away from Athens, the island of Spetses, with its picturesque old harbor, is a well-known destination for a fabulous weekend getaway. Spetses has an especially elegant atmosphere, mainly due to its many Venetian mansions, which bring to mind another place and time.
The scenic capital of the island, Spetses Town, is ideal for meandering, romantic walks, while there’s plentiful swimming and sunbathing to be enjoyed at the many beaches along its shores.
A selection of boutique hotels, sophisticated restaurants, and marinas filled with yachts from all over the world are just some of the more cosmopolitan attractions of this island.
When English novelist and screenwriter Anthony Horowitz first visited the town of Spetses, he described it as “charming, unlike anywhere I’ve visited in Greece, starting at ground level, with mosaics fashioned out of colored pebbles.”
Greece has any number of spectacular islands, but truly, this magical place is an ideal destination for those who feel like relaxing and unwinding close to — yet so far from — the Greek capital.
It’s time to get lost in the enchanting world of Spetses.
Island History
Archaeological excavations show that the first signs of human habitation on Spetses are from the Early Bronze Age; this is also called first Hellenic Era, which occurred about 2,500 BC.
The local population increased during the 15th century, with people coming from the Peloponnesian Peninsula. However they were unable to create permanent villages or towns there due to the frequent pirate attacks the island suffered.
Only beginning in the seventeenth century were the first real towns established on Spetses.
Once established, Spetses began to develop a strong maritime and trading tradition, which is still one of the trademarks of the island.
The sophisticated, cosmopolitan image of the island of Spetses was initially created by Sotiris Anargyros, a Spetsiot who became rich in America. He first used some of his money to build a road and a reservoir there, and also founded a prestigious private boarding school, the Anargyrios and Korgialeneios School, in 1927.
Anargyros then built the first luxury hotel on Spetses, the Posidonio Hotel, in 1914, and financed the conservation and reforestation program of the island’s pine forest. 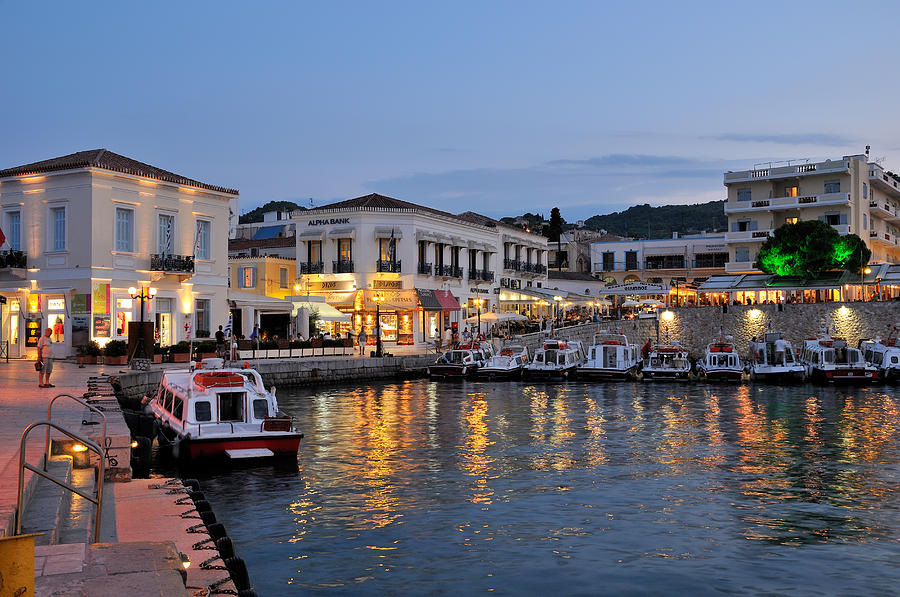 Beaches
Aside from the main beach in the town, which is lovely in itself, there are many other beaches on the island on which to enjoy a day in the sun with all the amenities. Transport to the beaches in Spetses is made easy by bus, or by boat from Dapia, the island’s new port.
All the beaches on Spetses are lovely and scenic, providing the perfect places for relaxing family vacations. You owe it to yourself to explore the best beaches on the island, four of which are listed below.
Spetses Town Beach
The beach here is centrally located, stretching all along the shoreline of the town. The road to the right of Dapia, the central part of the main town, leads to this area.
The beach has some sand, but it is mostly pebbled, and it has shallow green waters that are great for a relaxing swim. 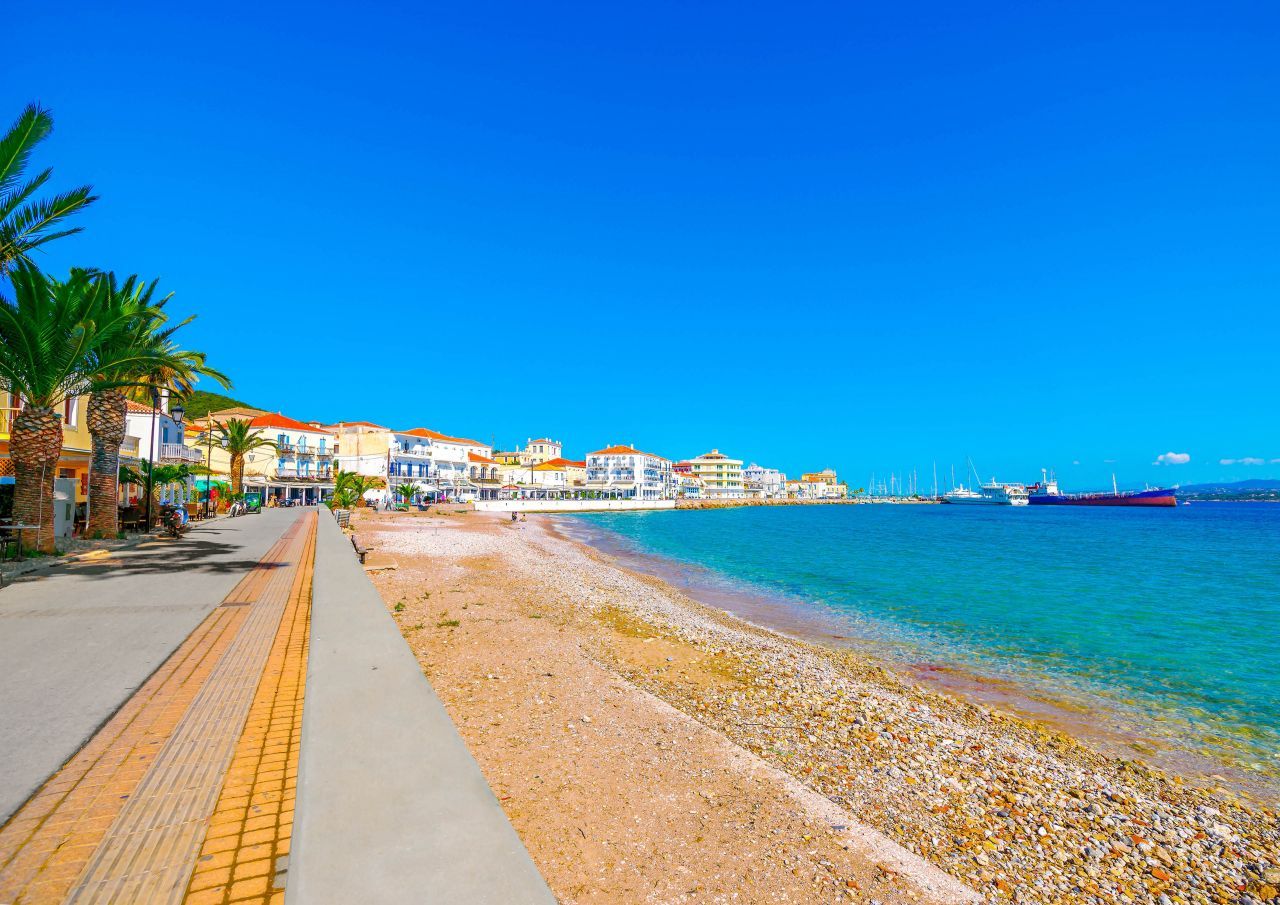 Agia Paraskevi Beach
The stunning sandy beach of Agia Paraskevi is found in a sheltered cove on the western shore of the island.
The thick pine forest offers some shade on the beach, and one can enjoy water sports and the nearby snack bar. This quiet, lovely place can be reached either by road or by taxi boats, which make stops there. 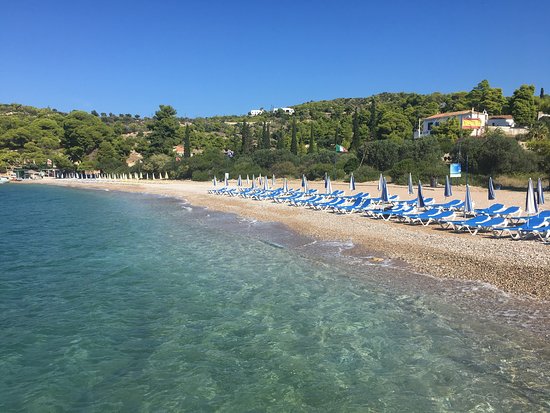 Agia Marina Beach
Agia Marina is Spetses’ most popular beach. It has a gorgeous small pink and white chapel of the same name close by, which is surrounded by palm and cypress trees, as well as pines.
The beach consists of sand and pebbles and amenities include a variety of water sports, sun-beds, umbrellas, a beach bar and numerous tavernas near the water where you can enjoy fabulous Greek food.
Archaeological excavations have discovered evidence of ancient human settlement in Agia Marina, including ruins of a fortified wall, figurines, and clay vessels, which all date back to the Early Bronze Age. 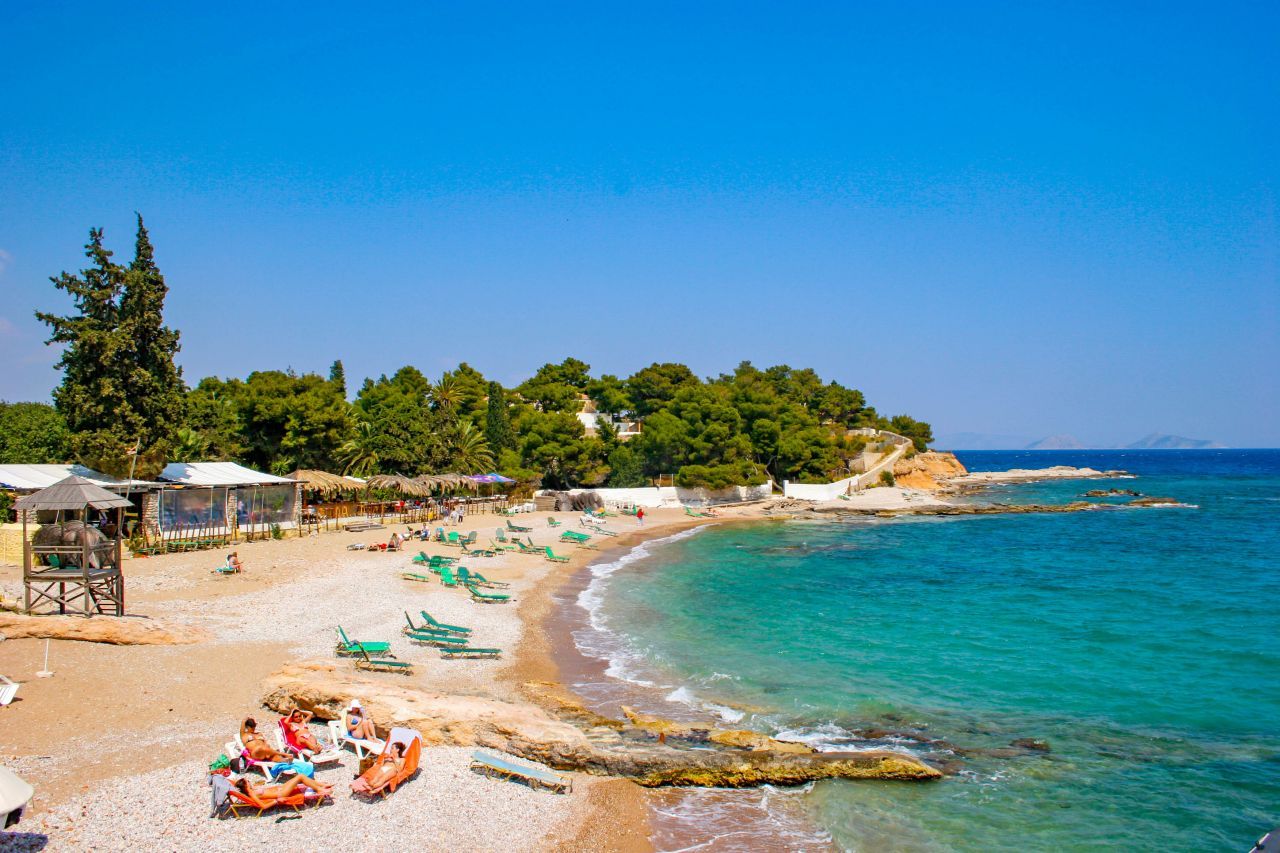 Agioi Anargiri Beach
Agioi Anargiri is one of the largest and most developed beaches on Spetses. Situated in a lovely cove, it is a pebble-and-sand beach with especially deep waters, which make it perfect for water sports activities.
A number of good tavernas can also be found in the area, for a delicious repast after a long day at the beach. Agioi Anargiri Beach can be reached by either a local bus or taxi boat. 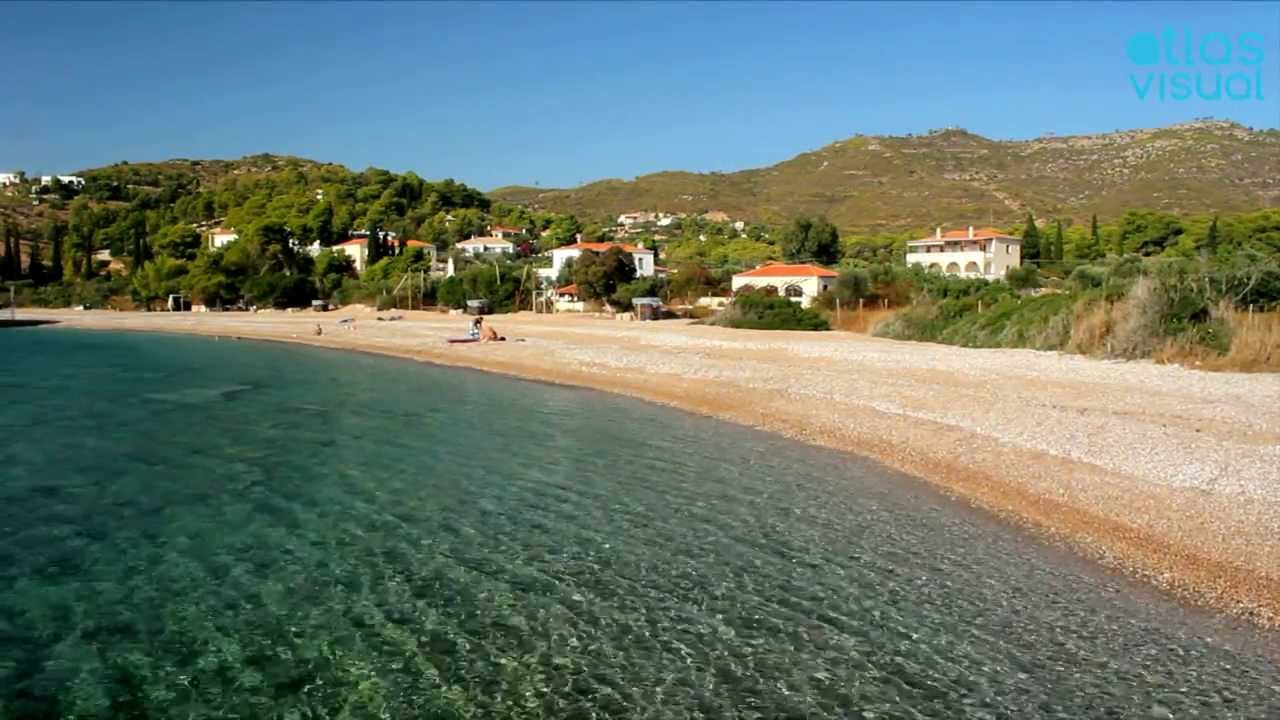 What to do on Spetses
Apart from the beautiful beaches dotting the island of Spetses, what draws visitors to this island is its undeniable romantic charm. Therefore, a must do when visiting this scenic place is to take a romantic trip around the island in a horse-drawn carriage. 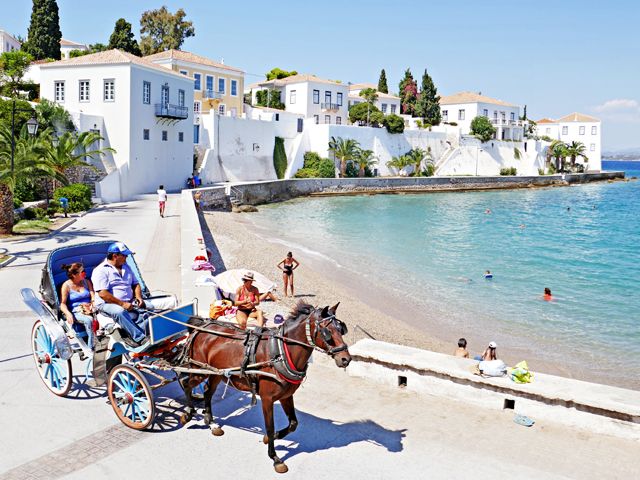 The Old Harbor Area
The old Harbor area of Spetses, called Baltiza, was an important shipbuilding center during the 18th and 19th century, and features lighthouses and museums for interested visitors today.
Lighthouse
The lighthouse on Spetses, located on the right side of the old harbor, is one of the oldest lighthouses in Greece (which, let us not forget, is the nation which invented lighthouses). 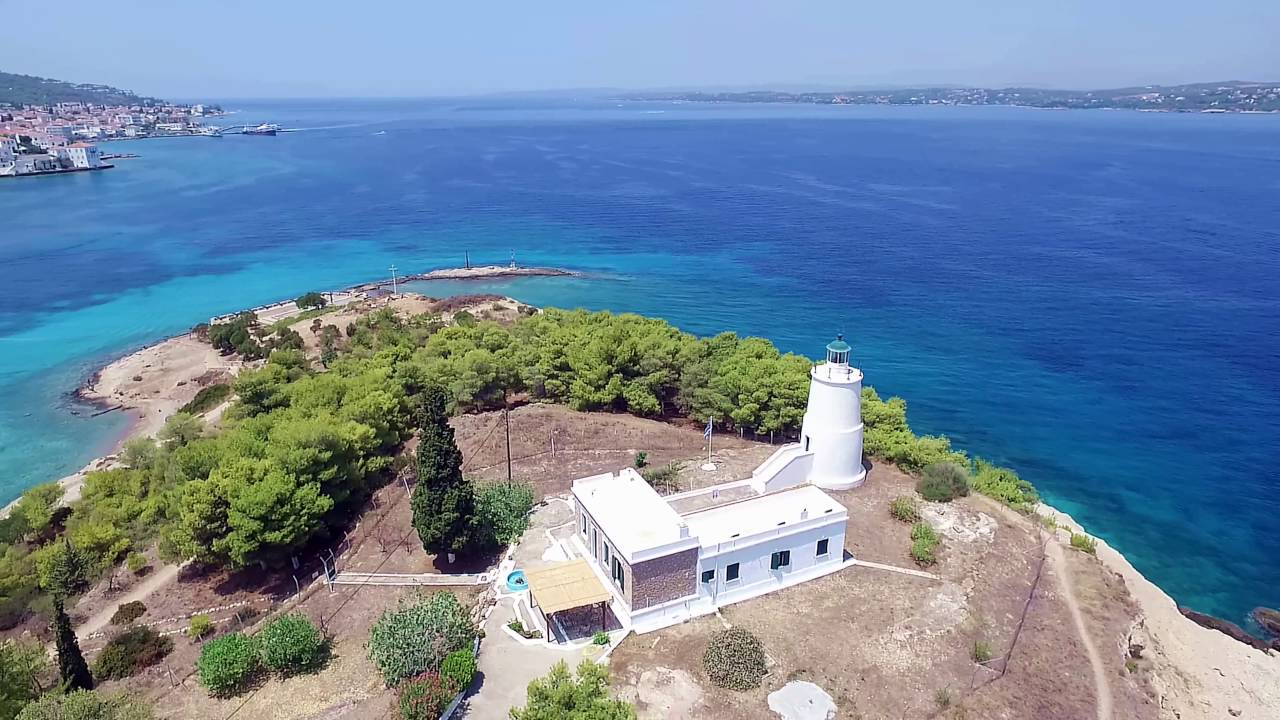 Spetses Museum
This interesting historical museum is located in the mansion once belonging to a local merchant who lived in the nineteenth century named Hatzigianni-Mexi. It includes items which portray the history of the island from ancient through modern times.
Bekiris Cave
Truthfully, this stunning cave is not easily accessible but it provides unforgettable sights to those who venture in, including a small sandy beach as well as formations of stalagmites and stalactites. You can reach the cave by boat or via a path from the beach at Agioi Anargiri. 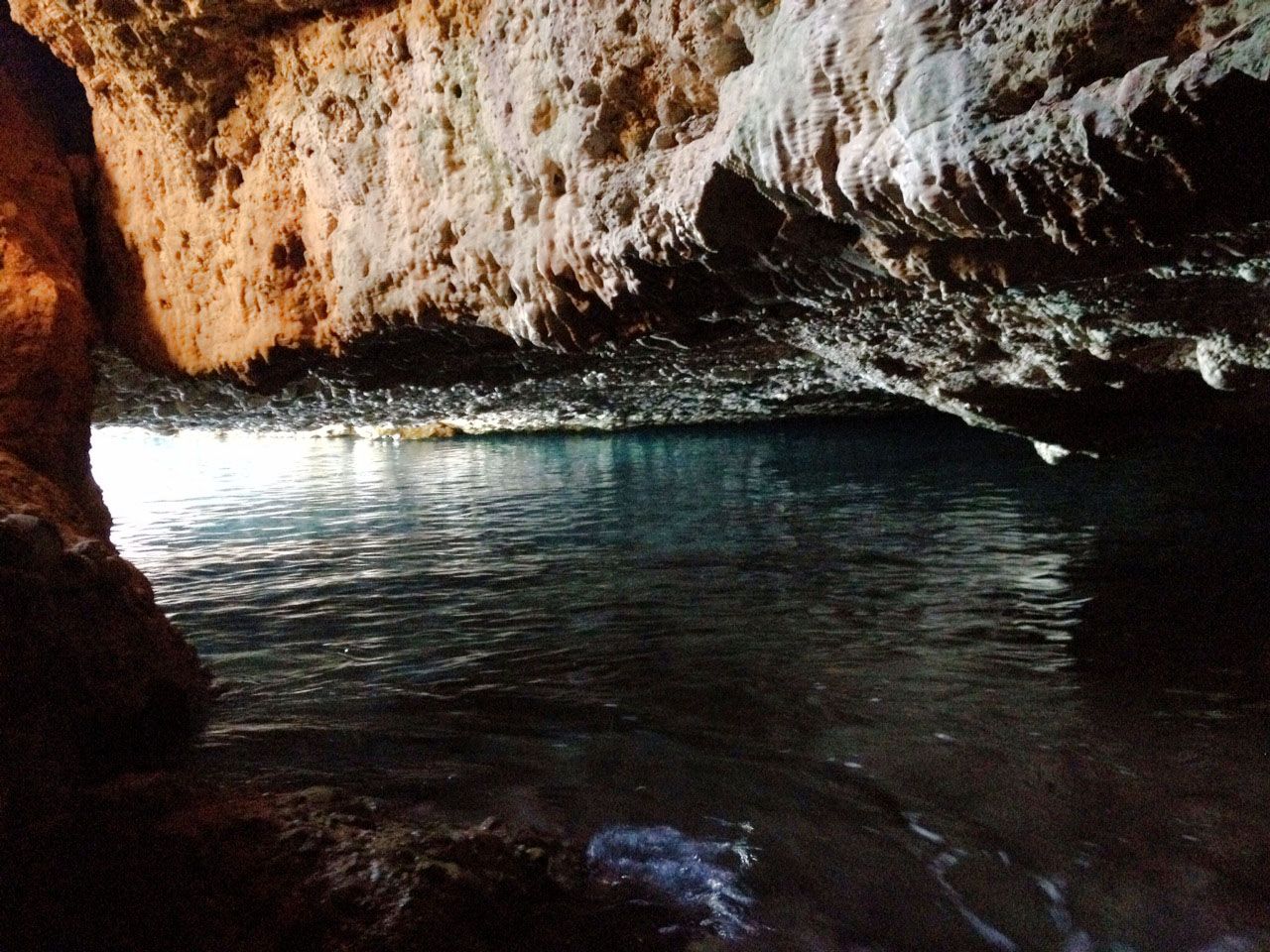