Naxos, Greece's Island of the Gods

By Assil Giacheia
July 29, 2019
Facebook
Twitter
WhatsApp
Linkedin
Email
Naxos is the largest island of the Cyclades, and although it is comparatively unknown relative to Greece’s many other island idylls, it is one of the most enchanting places for any visitor.
Despite flying somewhat under the radar, the island is one of the most interesting places in Greece. It boasts a magnificent history, with influences from the Franks and the Venetians, who are responsible for numerous monuments from the Middle Ages. The island is completely overtaken by history.
Apart from boasting a fascinating past, Naxos possesses a lovely natural landscape, since it is the greenest island in the Cyclades archipelago. As well as having beautiful beaches, its rural villages are set into a backdrop of green valleys and mountains.
The island is also unique because it incorporates four smaller islets, Koufonissia, Iraklia, Donoussa, and Schinoussa which actually belong to the municipality of Naxos and the Small Cyclades. Travelers here have the unique opportunity of experiencing five islands in one destination.
This gives added value to the island, since it offers the chance to hop on over to these smaller islets and experience their almost completely untouched, romantic beauty.
With captivating legends, myths and history, stunning landscapes, and gastronomic specialties, Naxos is definitely worth discovering.
Its Fabled History

In Greek mythology, the island of Naxos was where Zeus, the king of the gods, grew up, hiding from his father Cronus’ violence. This is also where the god planned to win his Olympian throne.
According to myth, Zeus Eubouleus, the protector of the Naxians, fell in love with Semele, who was the daughter of King Cadmus of Thebes. From their union, Dionysus, the god of wine and revelry, was born.
Hera had urged Semele to ask Zeus to appear in all his divine form.
Since Semele was a mortal, she was unable to withstand the volley of thunderbolts that emanated from Zeus, and this resulted in her death. She died before giving birth, whereupon Zeus took the fetus and placed it in his thigh.
When the time came for him to be born, Dionysus emerged from Zeus, and he was brought up on Naxos by the local nymphs. Dionysus understandably grew to love the island, and used his power to make the land fertile, filled with vineyards which produced the finest wines. The local people built a temple on the island in honor of Dionysus.
Naxos is also where Theseus took Ariadne, the daughter of Minos, the King of Crete, after killing the Minotaur. According to myth, Theseus saw the Greek god Dionysus in a dream, and the god told him to leave Naxos without Ariadne, since she was meant to stay there and become his wife.
Dionysus and Ariadne had three children, Oinopion (“Wine Drinker”), Staphylos (“Grape”) and Evanthi (“Lovely Flower”).
Venetian Conquest

The rule of the Venetians marked an important period in the history of Naxos. When Marco Sanudo took over the Cyclades, in the year 1207, he created a dukedom, which he named the Duchy of the Aegean, establishing the beginning of a long line of such rulers on Naxos.
Sanudo also constructed the beautiful castle which still exists at the very top of Naxos Town. The Jesuit Commercial School was also founded there, and flourished inside the castle.
For the next several centuries, the island was divided into 56 provinces, each of which were ruled over by numerous Venetian nobles. The rule of the Venetian dukes lasted till 1564, when the Turks took over the entire nation of Greece.
Essential Naxos Sightseeing
The Naxos Portara:
The Portara, or the Great Door, is essentially a massive marble doorway. It is located close to the port, on the tiny islet of Palatia, which was once a hill.
At one point, the tyrant Lygdamis began to build a temple on the tiny islet. He had grand ideas of creating a temple even larger than that of Zeus in Athens. After the tyrant’s fall, the temple remained unfinished, leaving only its foundation and part of its gate, or Portara.
Later, under Venetian rule, the marble was used to build the Castle of Naxos, other monuments and buildings. 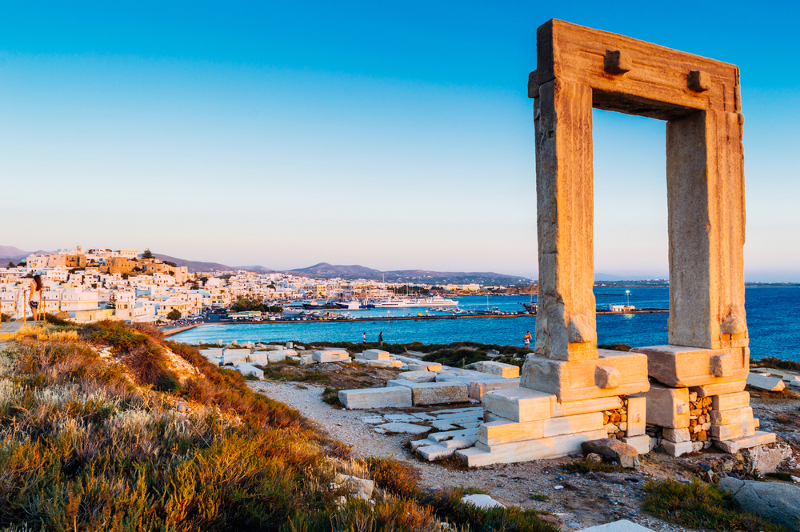 Kastro (the Castle of Naxos)
Along with the Tower of Glezos, the Kastro serves as a protective shield to the fortress built by Sanoudos in the Chora, or Old Town, of Naxos.
Sanoudo constructed the castle on a hill which rises approximately 30 meters (90 feet) above sea level, over the remains of an ancient acropolis, which he considered a suitable place for the original establishment of the city.
The most remarkable feature of his castle is that its walls are actually made up of the outer walls of the houses of the city, which were erected along its perimeter.

The Temple of Dionysus
Dionysus was especially beloved and honored by the ancient Greeks since he was the god of fun, wine, and celebration, who also bestowed fertility on the land, including its many vineyards. It was believed that he was a denizen of the island’s forests, and was constantly drunk on wine.
The residents built a large temple in honor of their god, but sadly only part of it survives today. From the pieces that remain, it was established that the temple was built sometime in the sixth century BC.
The Romans reconstructed the temple to Dionysus in the first century BC, and in the fifth century AD, the temple was turned into a Christian church.

The Cave of Zas
According to myth, Zeus grew up here, finding refuge in the cave while being hunted by his father, Cronus. It was here that Zeus became ruler of Olympus, after being given the power over lightning, and to honor him, the residents of Naxos named the cave as well as the mountain after him.
Remains from various historical periods including Roman, Neolithic, and many others, were found in archaeological research carried out in this Naxos cave in 1962. It is also known to have been used as a refuge during the Ottoman Occupation.
Two different paths lead to the cave. One begins near the village of Danakos, and the other near Filoti. While exploring near the cave, you will also find the fountain of Aries, which still has potable water even today.

Mount Zas
Mount Zas, the tallest mountain on the island, is also the tallest mountain in the Cyclades. The peak of Mount Zas, with an altitude of about 1,000 meters, or 3,000 feet, above sea level, is a popular destination for mountain climbers and hikers on Naxos.
Trekking from Danakos, one passes the small chapel of St. Marina, as well as the Cave of Zas and an inscription on a piece of ancient marble which translates as “Mount Zas, protector of the sheep.” This shows the great importance given to stockbreeding on the island since ancient times.
Trekkers can experience enchanting panoramic views of the Aegean sea, as well as the neighboring islands of the Cyclades, from the top of Mt. Zas.

Bazeos Tower
This stout castle, which also functioned as a monastery, was built in the seventeenth century to offer refuge to the residents of the island due to constant pirate attacks.
By the end of the nineteenth century, the Bazeos family owned the castle, and it was used as their summer residence until their last descendant recently chose to turn the castle into a space suitable for hosting cultural events.
The “Naxos Festival at Bazeos Tower” has taken place every summer since 2001, offering events of cultural interest as well as exhibitions of contemporary works of art.

Sunbathing on Naxos
Agios Prokopios
Located 5 kilometers (3 miles) from Naxos Town, the beach of Agios Prokopios is considered as one of the most spectacular beaches not just in Greece, but also in the entirety of Europe.
Its wide sands extend over 1.5 kilometers (one mile) and its crystal clear waters, which alternate from hues of light to deep blue and turquoise, are the most prominent feature of this sheltered bay, making it a must visit for all vacationers on Naxos.
One part of the beach is an organized resort, but the other part is left completely unspoiled, providing a peaceful, idyllic haven on its western side, where a chapel of the same name also stands.
Meanwhile, water sport lovers can get their fill, thanks to the wealth of activities on offer there, including beach volleyball, windsurfing, sea bicycling and snorkeling.
Since Agios Prokopios served as the main port of Naxos during the Middle Ages, a picturesque old shipwreck can also be found at the end of the beach.
Shops can be found in a nearby small village, along with mini markets, cafes, bars, tavernas, and car and motorbike rental agencies. Everything vacationers could possibly need is located here, on the beach’s eastern side. 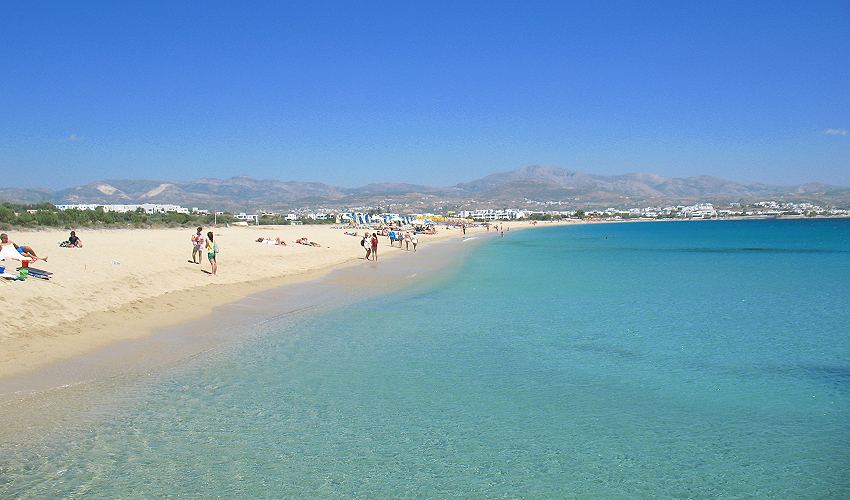 Agia Anna
Once a fishing village, the 6-kilometer (four-mile) long Agia Anna Beach is actually a continuation of Agios Prokopis Beach. This seemingly endless sandy beach is interrupted only by its picturesque harbor, which serves as an anchorage for area fishermen.
Agia Anna Beach, considered one of the best organized beaches on Naxos, features umbrellas and sunbeds all along its length.
There are numerous types of accommodation such as beach front hotels, as well as apartments and rooms to let. You can find a great selection of beachfront restaurants, fish tavernas, beach bars, and cafes offering both stunning views of the sea and the surrounding landscape.
At times, the northern part of the beach gets choppy waters, but the small port is protected by the winds and is usually very calm, making it ideal for a nice relaxing swim even with the strongest winds.
Agia Anna and Agios Prokopis are connected to the Chora by buses which pass by every 20 minutes to half an hour, from the early morning hours to late at night. 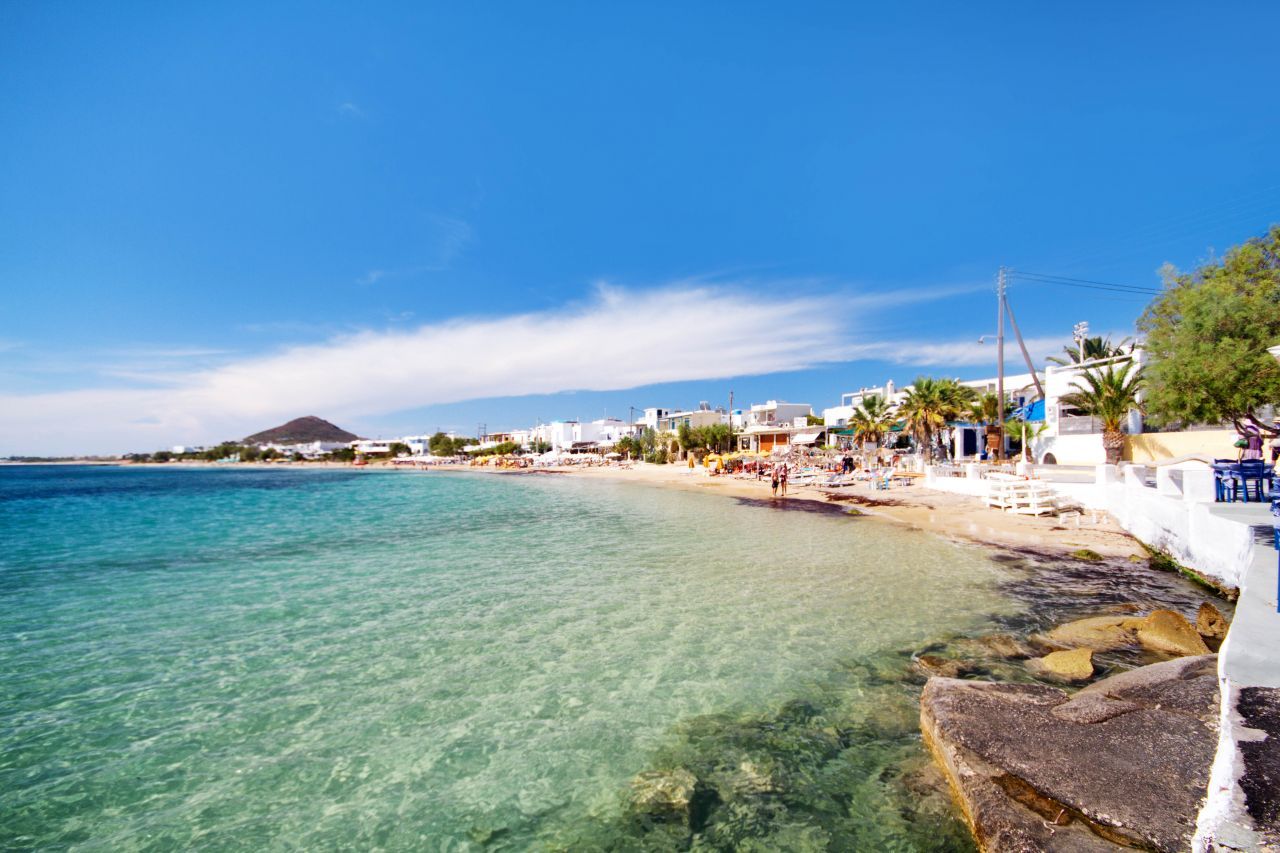 Other Naxos Beaches
Plaka
A continuation of Agia Anna beach, Plaka is one of the most mesmerizing beaches of the island. Another seemingly endless beach, it has a very calm and unspoiled atmosphere and offers beautiful, crystal clear waters.
Sun beds and umbrellas can be found only at one end of the beach. For the most part, the beach has kept its virgin, natural beauty. You can also find a few restaurants, hotels, and cafes there as well.

Panermos
Visitors can take the road to the southeast part of Naxos, and see a completely natural landscape that is still wild and secluded. It is among the most secluded beaches of the island, but recently has begun to attract more people.
This sandy beach is partly organized and has clear waters, as well as a few palm and other trees that offer natural shade. Behind the beach, a small cafe can be found where you can grab a bite to eat.

Barozzi Restaurant & Cocktail Bar
This restaurant offers traditional dishes cooked with local ingredients, made with a creative twist, and all dishes are paired with a diverse list of wines and cocktails. This offers a magnificent dining experience to travelers, in a very relaxing environment.

Labyrinth
Labyrinth has proven to be a popular tourist spot, partially doubt due to its traditional Cycladic feel. It has a great wine cellar featuring varieties from all over Greece. Its picturesque courtyard is another attraction here, which makes it perfect for some relaxation on a hot summer day.

Flamingo
This family-run restaurant, opened in 1991, offers spectacular views of the harbor. As well as having a lovely atmosphere and a classy setting, it serves traditional Greek food, with an expansive Greek and international wine list. There is occasionally a band at Flamingo which plays traditional Greek songs, the ultimate complement to your dining experience on Naxos.