GRNews
GreekReporter.comGreeceThree Out of Four Greeks Do Not Trust the News, Reuters Study...

Three Out of Four Greeks Do Not Trust the News, Reuters Study Suggests 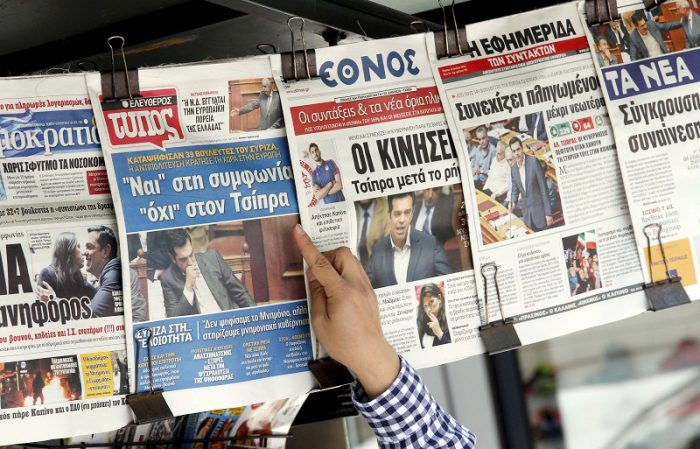 The Digital News Report 2019, compiled by the Reuters Institute was published on Wednesday, revealing some interesting facts about the attitude Greeks have toward their country’s media.
The report includes the findings of surveys conducted in 38 countries across the globe.
The most shocking finding is that Greece came 36th of 38 countries studied in terms of the trust its citizens have in the news they read, watch or listen to from Greek media sources.
Only 27 percent of Greek citizens said that they trust the news the country’s media broadcasts, with a whopping 73 percent saying that they do not trust what they see or hear.
Greece was one of the first countries, if not the very first country, in the Western world to experience a widespread feeling of mistrust toward newspapers and the general ”media establishment” of the country. This trend has now spread across Europe and the United States.
From the very early stages of the Greek financial crisis in 2010, Greeks began to express their strong mistrust of established media corporations, mainly due to their coverage of the financial crisis and the pro-austerity stance that most of them held throughout the years of the Greek downturn.
At that time, this stance was in strong opposition to the general public opinion on austerity in Greece.
According to the Reuters report, only seven per cent of Greek citizens pay a fee to subscribe to a news website, depicting the level of mistrust the public still has toward Greek media.
In terms of individual news organizations in Greece, the one entity topping the list in terms of public trust did not manage to score more than 6.13 out of a possible 10 points.
The Kathimerini newspaper, based in the nation’s capital, scored 6.13, while Greece’s Public Broadcasting Corporation ERT scored only 5.25 out of 10.
For the first time, phone devices came first, alongside laptops, in response to the question ”What device you use to read or watch for news.” Sixty-five percent of respondents said they use their mobile phones to access news, with the same amount of people saying they use their laptops.