TechNews
GreekReporter.com Greece Greece's Folk Traditions for the Feast of the Ascension

Greece's Folk Traditions for the Feast of the Ascension 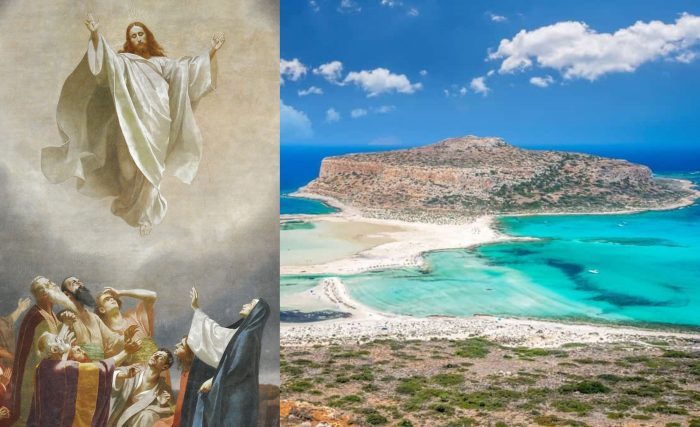 June 6, 2019 is Ascension Day according to the Orthodox Christian Church. This great feast day in the Christian calendar has played a crucial role in Greek folk traditions throughout the centuries.
For generation upon generation, Greeks have believed that Ascension Day is the day that one must take their first swim in the sea for the summer season.
Tradition has it that when someone goes to the beach on Ascension Day, it’s also imperative to swim against forty waves; this is necessary to have a calm and quiet summer.
Different variations on this tradition are found across the Greek world on this important day. The Greeks of Asia Minor, for example, believed that on this day people must go to the beach and find a ”hairy stone.” Stones that have vegetation growing on them were believed to bring luck to their holders, so the first ”hairy stone” that one finds on Ascension Day must be brought back home.
In other parts of the nation, farmers were obliged not to use the milk they produced on that day to make cheese or yogurt. Instead, tradition had it that they had to share the milk with friends, neighbors and relatives, and what was left had to be used to make rice pudding.
The Feast of the Ascension of Jesus Christ, or Ascension Day, or even “Ascension Thursday” (”Pempti tis Analipseos” in Greek) commemorates the Christian belief of the bodily Ascension of Jesus into heaven.
According to what some Christians believe, this is the day when all souls which were free to be among the living from the day of Jesus’ Resurrection, now have to go back to where they belong, either to Heaven or in Hell.
Ascension Day is traditionally celebrated on a Thursday, and it is the fortieth day of Easter, for most of Christian denominations, including the Orthodox, the Catholic and several Protestant Churches. The evening Vespers, sung the night before Ascension Day, is the last time during the ecclesiastical year that worshipers sing the Easter hymn “Christ is Risen.”