Greece’s center-right New Democracy (ND) party is the clear winner of the European elections held on Sunday, according to the joint exit poll presented by Greece’s major television stations at 19:00 local time. 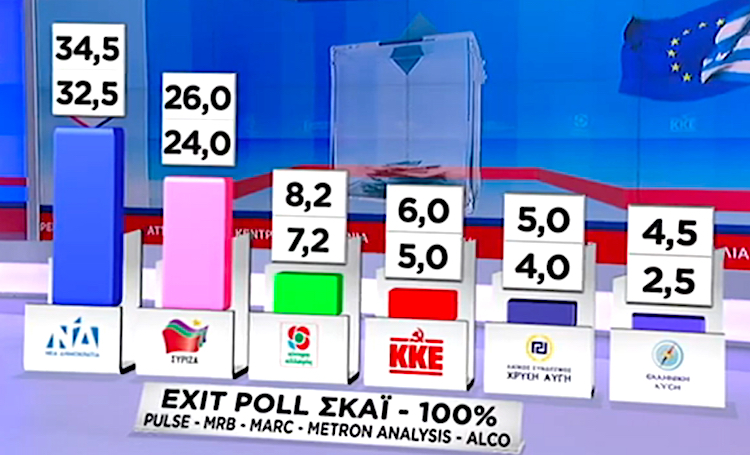 ND is expected to win between 32.5 and 34.5 percent of the popular vote, while governing SYRIZA is trailing, earning between 24 and 26 percent of the votes.
The center-Left Movement for Change Party is in third place, with between 7.2 and 8.2 percent of the vote.
The Communist Party (KKE) is in fourth place, with between 5 and 6 percent, followed by extreme Right Golden Dawn Party, with between 4 and 5 percent.
Recently-formed rightist Elliniki Lysi (Greek Solution) Party is between 2.5 – 4.5 percent and Yanis Varoufakis’ Mera 25 is are also between 2.5 and 4.5 percent.
Potami, the Independent Greeks and the Centrists Union follow with between 1.0-2.0 percent.
According to a separate exit poll conducted by state TV ERT, the EU voting results would be:
ND: 30.5 – 33.5 percent
SYRIZA: 25.5-28.5 percent
KINAL: 6-8 percent
Golden Dawn: 6-8 percent
KKE: 5-7 percent
MeRA 25: 2.5-3.5 percent
Greek Solution: 2.5-3.5 percent 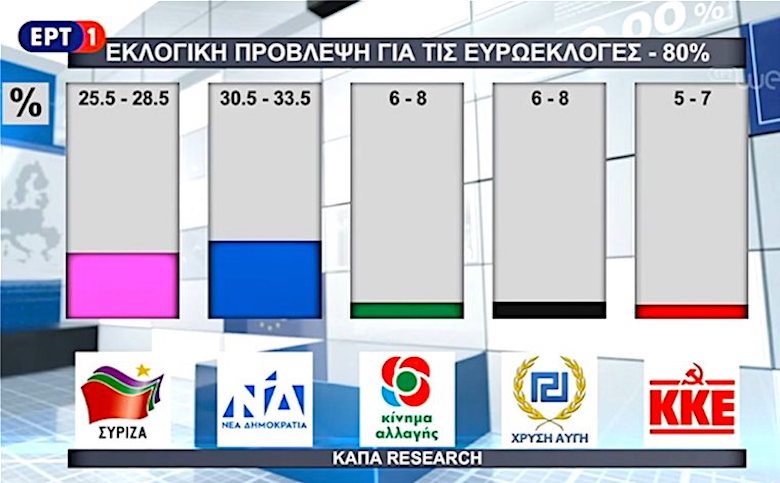 First safe estimates on EU elections for Greece expected around 21:00 local time.
ND Leader Kyriakos Mitsotakis had been calling for a clear victory for his conservative party for months, something that, he claims, would force Premier Tsipras to resign and call a snap General Election.
The final results are expected to be announced later this evening.
(This is a developing story)