The historic Panagia Soumela Monastery dedicated to the Virgin Mary and located in Trabzon in the Black Sea is to reopen its doors to the public on May 25, 2019 after more than three years of restoration work.

The religious touchstone for all Pontian Greeks closed to the public on September 22, 2015 due to rock falls which posed a danger to visitors. The ancient monastery also required restoration work after it had suffered various acts of vandalism.

Literally carved into the side of a mountain in the Pontic mountain range near the Black Sea (Pontus) in the Turkish province of Trabzon, the monastery is not only an important cultural and religious landmark, but a tourist destination as well because of its superlative natural beauty.

The great significance of the Sumela Monastery – also referred to as “Panagia Sumela” by Greeks – lies in the 1700-year-old miraculous icon of the Virgin Mary, which according to the Orthodox Church was the handwork of the Apostle Luke, the Evangelist. 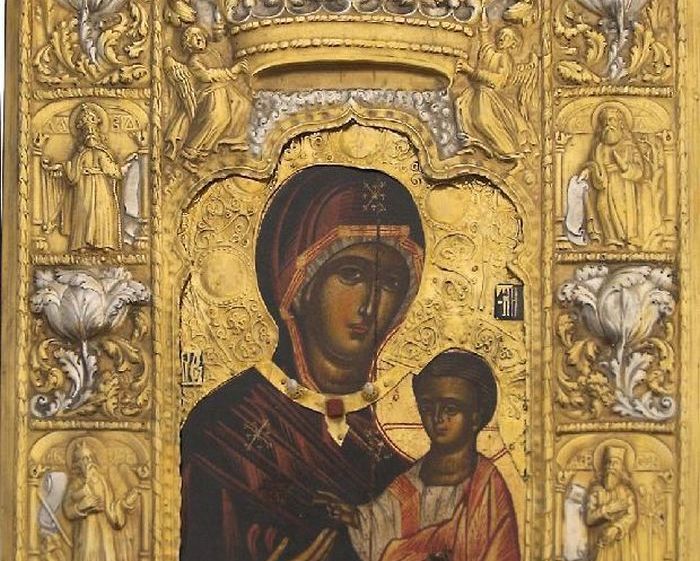 The miraculous icon of the Virgin Mary

According to Greek Orthodox tradition, the miraculous icon (along with two others) was created in Thebes by the Evangelist, whose work Mary the Mother of Christ saw herself, and blessed. After his death, Luke’s disciple Ananias took the icon to Athens and placed it in the Parthenon, where it became widely known as “Our Lady the Athiniotissa” (Our Lady the Athenian). At the time, the Parthenon was referred to as Hagia Sophia Church.

The icon remained there for  several years, and then it was placed in the newly-built temple dedicated to the “Great Virgin Mary,” in the gallery of Hadrian (which was itself later completely destroyed in the great fire of 1885).

The icon remained in the temple until the year 385. According to tradition, the Virgin Mary appeared to the monks Barnabas and Sophronios and asked them to build a monastery in Her name in Pontus and place her icon there.

Barnabas and Sophronios took the holy icon and traveled all the way to Pontus, on the way visiting the Holy Monastery of St. John the Baptist and seeing the way it was constructed on the slde of a mountain. Then, by divine inspiration, they came upon what they considered the perfect spot for a monastery on Mount Mela, south of Trabzond today. The Monastery of Panagia Soumela  was built on that very spot.

The two monks lived there until 412 and both died on the exact same day. Barnabas even left a covenant, a type of will, which he signed, “Barnabas of Athens, having written his covenant, Eighth Everlasting, 412”.

According to tradition, Sultan Selim fell seriously ill during a hunting trip and his life was in grave danger. His guard took him to the monastery, where the fathers invoked the help of the Virgin Mary. Miraculously, Selim recovered after embracing Her holy icon.

The Persecution of Greeks and the raid on the Monastery

In 1922, during the persecution of Greeks and the Pontic genocide, the Turks burnt the Monastery in an effort to completely uproot the Greek element from the Pontus region. All the precious, priceless relics and treasures were looted before the fire.

However, anticipating the Turkish attacks, the monks had already hidden the most important holy object, the miraculous icon of Mary, as well as other heirlooms such as the Gospel of Saint Christopher and a cross donated to the Monastery by Emperor Manuel III of the Komnenos dynasty.

The sacred objects were buried for safety in the chapel of Agia Varvara, located just two kilometers from Soumela Monastery.

The Greek population was completely driven out of the Pontus area, and the heirlooms laid in their secret cache for about ten years. In 1930, the metropolitan of Xanthi, Polykarpos Psomiadis and welfare minister, Leonidas Iassonidis, addressed Greek Prime Minister Eleftherios Venizelos to deal with the issue of the lost heirlooms.

The Turkish authorities accepted the Greek request and in 1931 a delegation, led by Archbishop Ambrosios, went to search for the sacred objects. The heirlooms were successfully found and were transferred to Athens to be exhibited in the Byzantine Museum, where they remained until 1951.

In August, 1952, the holy icon of Panagia Soumela was placed in the new Monastery of  Panagia Soumela, which was built on the slopes of Mount Vermion in northern Greece. The pilgrimage to the new monastery, and the sacred liturgies held there, have become a tradition not only for Pontians but for all Greek Orthodox Christians as well.

The Monastery and the icon of Panagia Soumela have transmitted the grace
of Christ to the believers for untold ages. The priceless Panagia, painted by the Apostle Luke, serves as the ultimate symbol of Pontic Hellenism for Pontic Greeks all around the world.

Pontic Greeks have made pilgrimages to Panagia Soumela Monastery for help during the most difficult times of their history. Generation after generation, they give homage and honor to Her. For sixteen centuries, Panagia Soumela has served as the symbol of the collective spiritual and cultural consciousness of Pontic Hellenism.

Panagia Soumela is the sacred symbol which links all the uprooted Pontic Greeks who were so cruelly forced to flee to all the corners of the earth. The ethereally beautiful image links  them to their heritage, and will keep them spiritually and culturally united together for eternity.