GRNews
GreekReporter.comGreeceBattle of Crete: How Cretans Took On the Largest Axis Airborne Operation...

Battle of Crete: How Cretans Took On the Largest Axis Airborne Operation of WWII 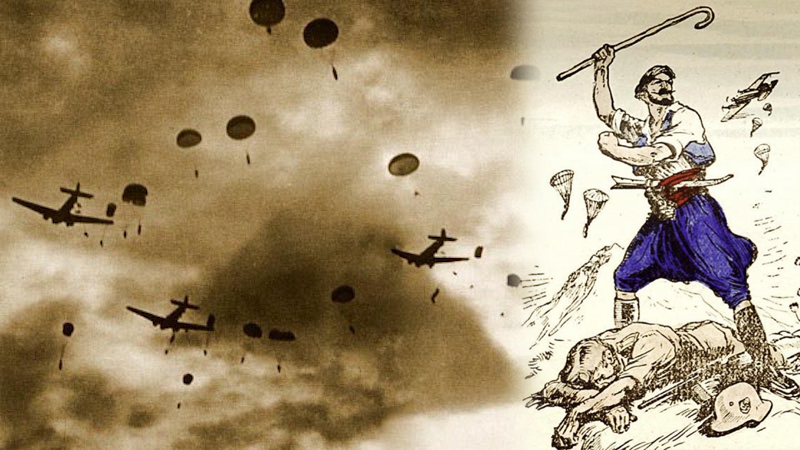 The Battle of Crete will remain forever in military history as the scene of the largest German airborne operation of World War II. In Greek history, it also serves as another chapter showing the bravery and the ultimate triumph of the Hellenic spirit.
Crete was targeted by the Germans because of the British airfields on the island, which were more than capable of striking the vital Ploesti oil fields in Romania. Hitler’s forces needed all the oil they could get for their impending assault on Russia.
Securing Crete would be tantamount to driving the British out of the eastern Mediterranean; it would also be the first step towards German control of Cyprus and the Suez Canal
The battle, which started on May 20 and ended on June 1, 1941, was dubbed “The  Graveyard of the Fallshirmjager” (the German parachutists known as ” Sky Hunters”). Nearly 4,000 German troops were killed and 1,500 wounded in the first three days of the assault.
It was notably also the first time the Germans had encountered stiff partisan activity, with women and even children bravely taking part in the battle. 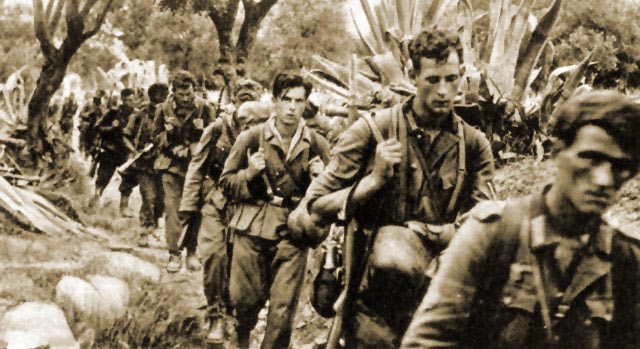 Early on the morning of May 20, waves of Stuka bombers and low-flying fighter planes bombed and strafed the Maleme, Chania, and Souda Bay areas. Later, a total 570 carrier aircraft dropped 8,100 parachutists at Maleme, Chania, Rethymno, and Iraklion.
The attack was undertaken in two waves, one in the morning and another in the afternoon, so they had enough time in between for the aircraft to return from Crete, refuel and return  back again to the island. The sky filled with thousands of parachutes as the church bells began to ring ominously across the island.
The stunned Cretans began to run towards the drop zones, shouting “Stop the Germans!”, carrying anything they could find, including outdated rifles, pitchforks, and old pistols. Many of the German parachutists never made it out of their harnesses.
The Allied troops on Crete — British, ANZAC and Greek Battalions which had been evacuated from mainland Greece — under British Commander Major General Freyberg had been aware of the impending assault through Enigma Machine intercepts. The German parachutists were dropped into areas which were heavily defended, with nearly three times the amount of men they were expecting to face.
In Maleme, the Germans jumped into enemy fire from infantry weapons positioned in the hills south of the airfield. Many of the paratroopers were killed during their descent or shortly after landing. Most of the men were unable to recover their armaments boxes and had to rely on the pistol, knife and the four hand grenades they carried on their persons.
Casualties were very heavy. The commander of the 7th Airborne Division, General Lieutenant Wilhelm Suessmann, was killed during the approach flight, while General Major Eugen Meindl, who was in command of the Maleme group, was seriously wounded shortly after landing. Both the Maleme and Chania groups were left without their commanders.
The parachutists suffered even more casualties than at Maleme and failed to capture the airfields, towns, or ports they which had been their targets. Some even landed at the wrong points because the troop carriers had difficulty orienting themselves. After they touched down, many of the parachutists found themselves in an almost hopeless situation, struggling for survival. 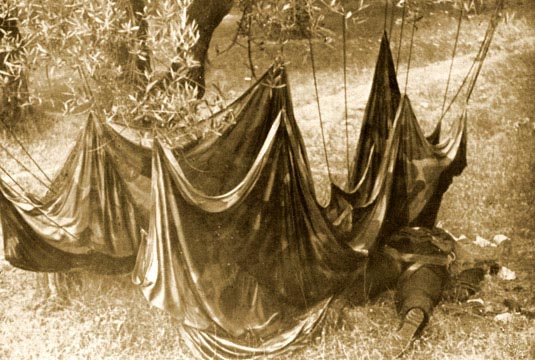 After the first day, no field was available for the airborne landing of the 5th Mountain Division, which had been scheduled for the next day. Chania was still in enemy hands and the isolated troops landed at the four drop points had so far been unable to establish contact among themselves.
However, despite the strong resistance, the fury and strength of the onslaught surprised the defenders. Despite heavy opposition and fire from the British antiaircraft guns set up near the airfield, the German attackers captured the northern and north-western edge of the airfield and advanced up the northern slope of Hill 107.
The Chania group, which was to capture the village of Souda and the town of Chania and eliminate the British command staff located in that area, landed on rocky ground and suffered many jump casualties. The isolated German elements made little headway against the well-entrenched Allied forces.
As the battle wore on and casualty reports began coming in to General Airborne Commander Kurt Student’s HQ at the Hotel “Grande Bretagne” in Athens, it seemed that the battle was lost. But luck was on the German side. British commander Freyberg had to withdraw some troops from positions around Hill 107, overlooking the Airfield at Maleme.
This stroke of luck gave the Germans the upper hand and enabled them to begin the desperately-needed air landing of the Gebirgsjager troops on the airfield. Little by little, the entire 5th Mountain Division was flown in. Even more important to the attack, forces were now equipped with the artillery pieces, antitank guns, and supplies of all types, which had been missing during the initial stage of the invasion and which were now being airlifted into Maleme.
The allies pulled back in the face of a constant flow of fresh troops, and began their retreat. On May 29, motorized reconnaissance elements, advancing through enemy-held territory, established contact with the German forces in the Rethymno area and reached Iraklion the next day. After repeated encounters with enemy rear guards, the German forces reached the south coast of the island on June 1st. The desperate struggle for Crete was thereby ended.
Despite the long delay in issuance of evacuation orders, the British Navy was able to safely  embark approximately 14,800 men onto ships and return them to Egypt. The Navy conducted the evacuation during four nights, suffering losses from German aircraft attacks. Subjected to severe losses and constant harassment by German planes, a total of five thousand British and Allied soldiers ended up being left behind. 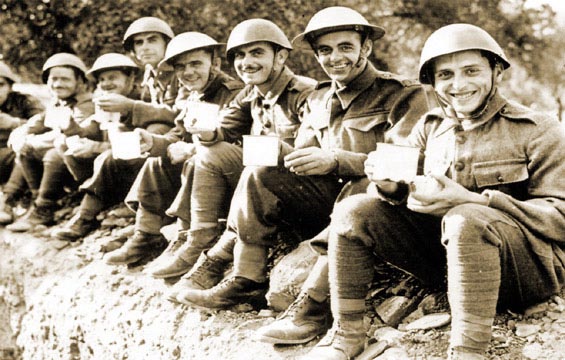 The retreat of the Allied forces was defended by the 8th Greek Regiment in and around the village of Alikianos. It was composed of young Cretan recruits, gendarmes, and cadets. They were poorly equipped and only 850 strong but they made up for the lack of equipment in spirit. Along with the Tenth New Zealand Infantry Brigade, they decisively repulsed the German “Engineer Battalion.” During the next few days they held out against repeated attacks by the 85th and 100th Mountain Regiments. For seven days, they held Alikianos and protected the Allied line of retreat. The 8th Greek Regiment is credited with making the evacuation of Western Crete possible.
The Germans had never encountered the extent of civilian resistance that they encountered on Crete. And retribution was swift. The German High Command wanted to break the spirit of the populace — and do it quickly. In retaliation for the losses they had incurred, the Nazis spread punishment, terror and death upon the innocent civilians of the island.
More than 2,000 Cretans were summarily executed during the first month alone and 25,000 more were to die later. Despite these atrocities, the brave people of Crete put up a courageous guerilla resistance, aided by a few British officers of the Special Operations Executive as well as Allied troops who remained on the island. The resistance fighters were known as the “Andartes” (“The Rebels”).

According to several historians, Cretan resistance played an important role in the development of WWII. By the end of the three-and-a-half years of occupation, Hitler had sent a total of 100,000 troops to the island to subdue 5,000 Cretan Andartes. These German troops could have been deployed somewhere else instead of being tied down on Crete.
More German troops were lost during the Battle of Crete than in France, Yugoslavia and Poland — combined. Most importantly, as a result of the fighting on Crete, Hitler’s master plan to invade Russia before the coming of winter had to be postponed, which resulted in the deaths of many German troops who were not properly prepared to survive the harsh Russian winter.

Battle of Crete: The largest airbourne operation of WWII

On May 20th, 1941, Nazi Germany invaded the Greek island of Crete with what remained in history as the largest airbourne operation of WWII. The Cretan response contributed greatly to the outcome of the war. Full story: https://bit.ly/2VwULbO