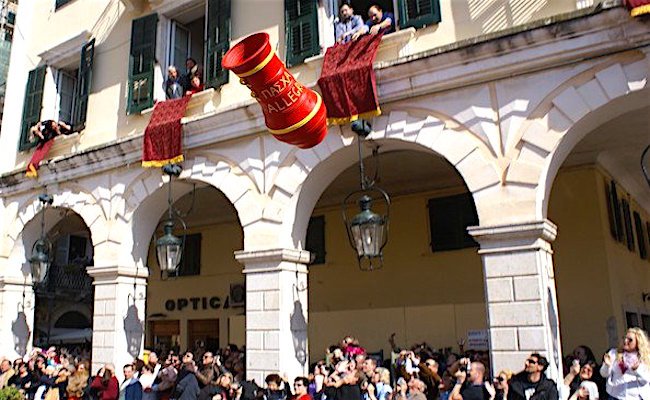 Thousands of locals and visitors commemorated the First Resurrection at noon on Holy Saturday with the traditional pot smashing ritual in Corfu’s city center.
According to the ancient island tradition, on Holy Saturday Corfu residents decorate their windows and balconies with red flowers, and then throw huge clay pots filled with red ribbons from them.
The pot smashing symbolizes an earthquake, like the one which occurred when the tomb of Christ broke open and He was resurrected.
As soon as the church bells ring at noontime, every man, woman, and child participating hurl their earthenware vessels from their windows and into the streets.
While the tradition originated in the city of Corfu, surrounding villages have also joined in the enjoyable, and ear-splitting, custom.
The origins of the noisy event are from Venice, where, on New Year’s Day, people would throw their old belongings – furniture, earthenware, basins, and so on – out of their  windows in hopes that the New Year would bring them new items.
Corfu residents adopted the custom for the most important day of Greek Orthodoxy, Resurrection Day. As for the pots, they were chosen precisely because they make a lot of noise when broken.