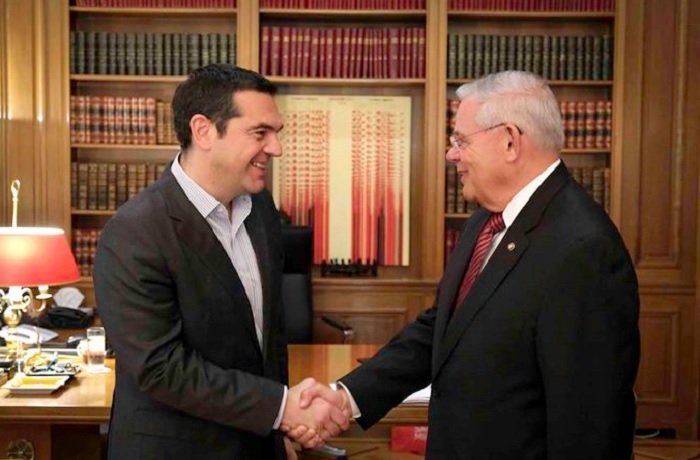 Greek Prime Minister Alexis Tsipras met with visiting US Senator Robert Menendez, the ranking member on the Senate Foreign Relations Committee, at Maximos Mansion on Tuesday.
The Greek premier thanked Menendez for his crucial involvement in promoting Greek-American relations, and for the many legislative initiatives he has undertaken in favor of Greece and Cyprus in recent years, as a member of the US Senate’s Foreign Affairs Committee.
During the meeting, particular emphasis was given to a bill currently before the US Congress. The proposed legislation was an initiative of senators Menendez and Marco Rubio regarding security in the eastern Mediterranean as well as ongoing Turkish provocations and the promotion of energy partnerships in the region.
Earlier in April, Senators Menendez (D-N.J.) and Marco Rubio (R-Fla.) announced “The Eastern Mediterranean Security and Energy Partnership Act of 2019.” Among other things, the Act would allow the U.S. to fully support the trilateral partnership of Israel, Greece, and Cyprus through energy and defense cooperation initiatives – including lifting the embargo on arms transfers to the Republic of Cyprus.
In this context, Tsipras and Menendez discussed the developing strategic relationship between Greece and the US in areas of security, defense, economy and investments following the US-Greece strategic dialogue which began in December. 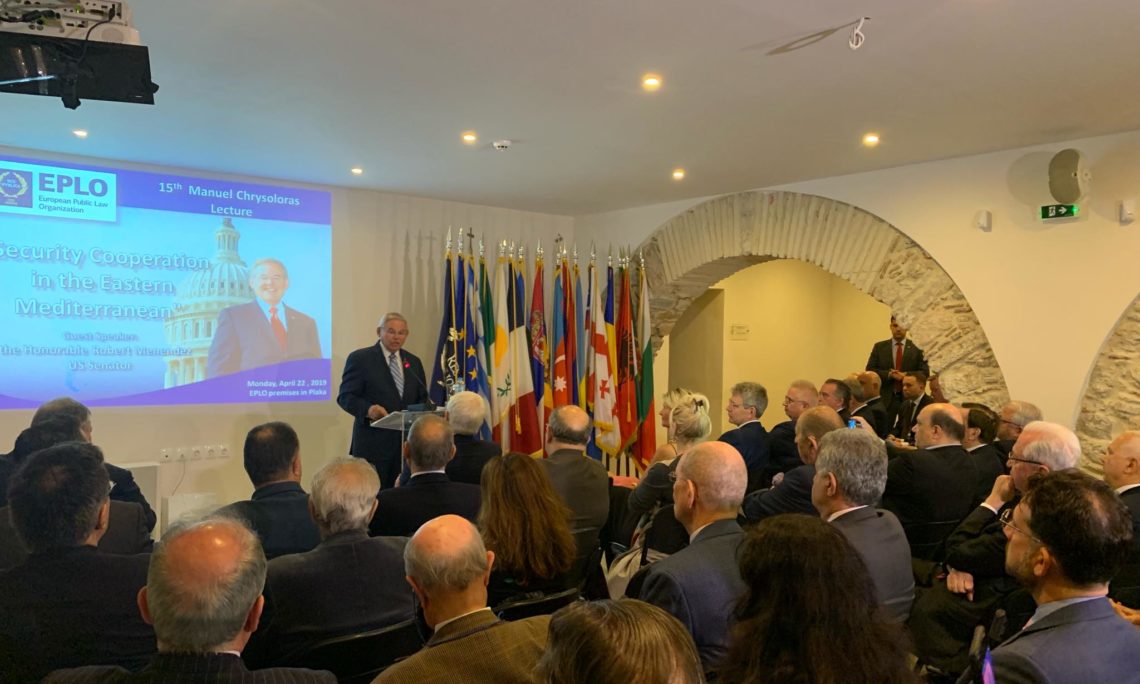 At a keynote speech on security cooperation in the eastern Mediterranean at the headquarters of the European Public Law Organization (EPLO) in Athens, Menendez referred to the challenges posed by Turkey regarding how it treats Greece and Cyprus.
“We see this in the Exclusive Economic Zone of Cyprus. Turkish interference there is unacceptable. The Republic of Cyprus is well within its rights to explore for energy within its EEZ and the US, as well as the private sector, must be prepared to support those efforts in word and in deed,” the senator stated.
“Turkish violations of Greek airspace over the Aegean are dangerous, reckless and could result in a miscalculation that plunges the region into conflict. Again, this is not acceptable behavior from a NATO ally,” the lawmaker declared.
“It is not the behavior of a responsible nation. God forbid if Turkey’s brazen actions were to result in the loss of life on Greek islands in the Aegean,” Menendez concluded.