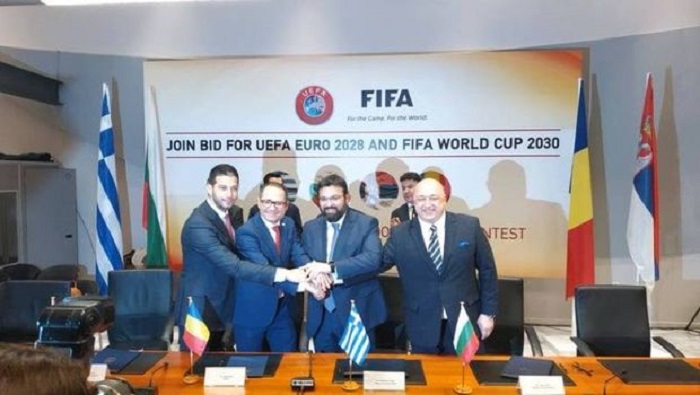 Greece, Serbia, Bulgaria, and Romania on Saturday announced a joint effort to host the 2030 World Cup and 2028 Euros.
“We are starting a common course, with optimism, with a smile, seriousness, awareness of reality and basically for better days for this area which usually worries the world with negative news,” said Greek Deputy Sports Minister Giorgos Vasiliadis.
He hosted the signing of a memorandum after meetings in Thessaloniki.
Vasiliadis was joined in signing the agreement with his counterparts from Serbia Vanja Udovicic, Bulgaria Krasen Kralev and Romania Bogdan Matei.
Also present were representatives of the football federations of the four countries.
“We want to show that we are pioneering, we can do things together and that the Balkans are open to change. It is a very big day for us and we are moving forward to making our dream come true,” Vasiliadis said.