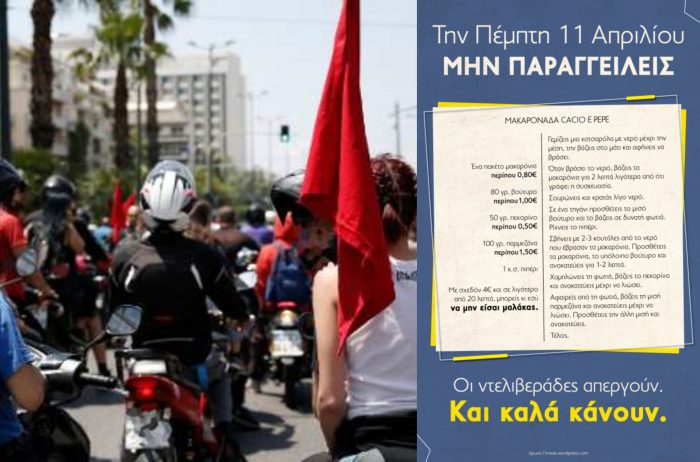 The first coordinated strike of workers in the food delivery sector will take place simultaneously in Athens and Thessaloniki on Thursday.
The workers in this specific sector have participated in strikes in the past, but this is their first attempt to coordinate their action in Greece’s two largest cities, which represent approximately one half of the population of the country.
Some of the workers found a clever way to encourage people to support their demands.


”Do not order food – Cook some pasta!” is their motto, printed in brochures which include the recipe for one of Greece’s most popular dishes, Spaghetti with Cheese.
The strikers hope to raise awareness about their job’s difficulties and their ongoing labor struggles with this unique tactic.
Among the demands of the workers is the official recognition of their job as a separate sector, which will give them the right to negotiate collective bargaining agreements with their employers.
Food delivery workers are also asking their employers to provide them with protective equipment from adverse weather conditions and other possible dangerous situations.
They are also demanding better social security provisions and for employers to be obligated to provide business motorbikes instead of having to use their own personal motorcycles for food deliveries.