GRNews
GreekReporter.comGreek NewsCultureHistoric Sumela Monastery to Finally Reopen in May

Historic Sumela Monastery to Finally Reopen in May 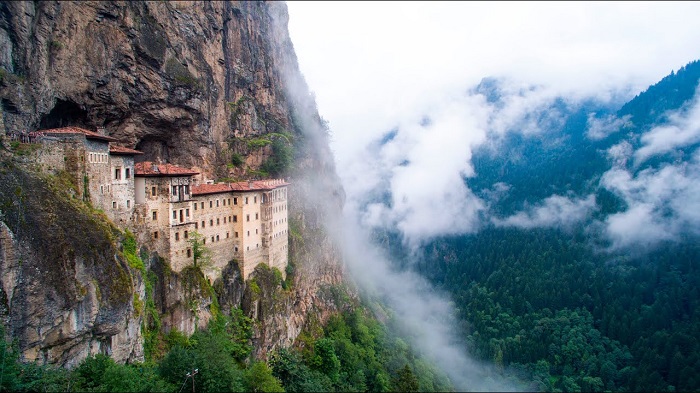 The first section of the historic Greek Orthodox Sumela monastery, dedicated to the Virgin Mary, will re-open to the public on May 18, Turkish authorities announced this week.

The monastery, a reference point and religious touchstone for all Pontian Greeks, was closed to the public in 2015 for restoration and rock improvement works.

Located on a steep and rocky area at the Mela Mountain (called “Karadag” in Turkish) it offers its visitors a beautiful combination of nature, history and culture.

The Anadolu Agency reports that 4,000 tons of rocks were cleaned, a 300-meter walkway was maintained, and historical aqueducts as well as the entrance building and the stairs were restored.

The monastery was founded in AD 386 during the reign of the Emperor Theodosius I (375 – 395). It became famous for an icon of the Virgin Mary known as the “Panagia Gorgoepekoos”, said to have been painted by the Apostle Luke.

The monastery reached its present form in the 13th century after gaining prominence during the existence of the Empire of Trebizond.

Sumela Monastery was abandoned in 1923, following the forced removal of the Greek population from the region. The departing monks were not allowed to take any property with them, so they buried Sumela’s famous icon under the floor of the monastery’s St. Barbara chapel.

In 1930, a monk secretly returned to Sumela and retrieved the icon. The priceless painting found a new home at the new Panagia Soumela Monastery, located on the slopes of Mount Vermion, near the town of Naousa, in Macedonia, Greece.